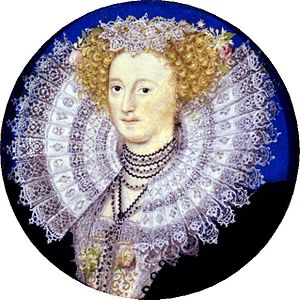 Mary Herbert, Countess of Pembroke (née Sidney; 27 October 1561 – 25 September 1621) was one of the first English women to achieve a major reputation for her poetry and literary patronage. By the age of 39, she was listed with her brother Philip Sidney, Edmund Spenser, and William Shakespeare, as one of the notable authors of her time in the verse miscellany by John Bodenham, Belvedere. The influence of her Antonius is widely recognized: it stimulated a revived interest in the soliloquy based on classical models, and was a likely source (among others) for both the 1594 closet drama Cleopatra by Samuel Daniel and Shakespeare’s Antony and Cleopatra (1607).[1] Sidney was also known for her translation of Petrarch's "Triumph of Death", but it is her lyric translation of the Psalms that has secured her poetic reputation.

Mary Sidney was born at Tickenhill Palace, Bewdley, Worcestershire on 27 October 1561. She was one of four daughters of Sir Henry Sidney and Mary Dudley, the daughter of John Dudley, Duke of Northumberland. As a child, she spent much time at court, where her mother was Gentlewoman of the Privy Chamber and a close confidante of Queen Elizabeth I. Like her brother, Philip Sidney, she received a humanist education, which included classical languages, French, Italian, music and needlework.

Following the death of Mary's youngest sister, Ambrosia, in 1575, the queen wrote for Mary to return to court to join the queen's entourage. In 1577, Mary's uncle Robert Dudley helped Sir Henry Sidney arrange her marriage to their close ally, Henry Herbert, 2nd Earl of Pembroke. As Countess of Pembroke, Mary was responsible for a number of estates including Ramsbury, Ivychurch (Alderbury, Wilts),[2] Wilton House and Baynard's Castle, London, where it is known that they entertained Queen Elizabeth to dinner. She and Pembroke had four children: William, later third earl of Pembroke (1580); Katherine (1581); Anne (1583); and Philip (1584). Philip became the 4th Earl of Pembroke on his brother's death in 1630. These sons are the "Incomparable Pair" to whom Shakespeare's First Folio is dedicated. 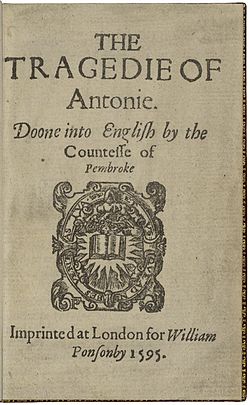 The title page of Sidney's The Tragedy of Antony, her interpretation of the story of Mark Antony and Cleopatra.

Sidney turned Wilton into a "paradise for poets", known as the "Wilton Circle" which included Spenser, Daniel, Michael Drayton, Ben Jonson and Sir John Davies, a salon-type literary group sustained by the Countess's hospitality. John Aubrey wrote that “Wilton House was like a college, there were so many and ingenious persons. She was the greatest patroness of wit and learning of any lady in her time.” She received more dedications than any other woman of non-royal status.[3] She was regarded as a muse by Daniel in his poem "Delia" (an anagram for ideal).[4]

Her brother, Philip, wrote much of his "Arcadia" in her presence, at Wilton House. He also likely began preparing his English lyric version of the Book of Psalms at Wilton as well. He had completed 43 of the 150 Psalms at the time of his death during a military campaign against the Spanish in the Netherlands in 1586. She finished his translation of the Psalms, composing Psalms 44-150 in a dazzling array of verse forms, using the 1560 Geneva Bible and commentaries by John Calvin and Theodore Beza. Hallett Smith has called the psalter a “School of English Versification”:[5] of one hundred and seventy-one poems (Psalm 119 is a gathering of twenty-two separate poems), the verse psalter only replicates the formal structure of a poem, its rhyme scheme and meter, three times. A copy of the completed psalter was prepared for Elizabeth I in 1599, in anticipation of a royal visit, but Elizabeth canceled her planned visit to Wilton. This work is usually referred to as “The Sidney Psalms” or “The Sidney-Pembroke Psalter” and is regarded as an important influence on the development of English religious lyric poetry in the late 16th and early 17th century.[6] John Donne wrote a poem celebrating the verse psalter, and claiming that he could “scarce” call the English Church reformed until its psalter had been modeled after the poetic transcriptions of the Philip Sidney and Mary Sidney Herbert.[7]

Mary was instrumental in having her brother’s Defence of Poetry (or, Defence of Poesy) put into print, and she circulated the "Sidney-Pembroke Psalter" in manuscript at about the same time. The simultaneous circulation of the two works suggests a proximate relationship in their design: both the Defence and the psalter translation argued (in formally different ways) for the ethical recuperation of poetry as an instrument for moral instruction—and particularly for religious instruction.[8] Mary also took on the task of editing and publishing her brother’s "Arcadia” which he claims to have written in her presence, as The Countesse of Pembroke's Arcadia.[9]

By at least 1591, the Pembrokes were providing patronage to the Pembroke's Men playing company, one of the early companies to perform the works of Shakespeare.

Mary's husband died in 1600 leaving her, Aubrey reported, with less financial support than she might have expected (through views on its adequacy vary). However, after. By some accounts, James I visited Wilton on his way to his coronation in 1603 and stayed again at Wilton following the coronation to avoid the plague. According to one account Shakespeare's company "The King's Men" performed at Wilton at this time.[10]

In addition to the arts, Mary had a range of interests. She had a chemistry laboratory at Wilton House, where she developed medicines and invisible ink. From 1609–15 Sidney probably spent most of her time at Crosby Hall in the City of London, now relocated as a private residence to Chelsea, London. She traveled with her doctor, Sir Matthew Lister to Spa on the Continent, where she relaxed by shooting pistols and playing cards. She built a Bedfordshire hunting lodge with fine vistas, Houghton House, now ruined near Milton Keynes), which John Bunyan refers to in his works, as the "House Beautiful".

She died of smallpox, aged 59, at her house in Aldersgate Street, London, shortly after King James I visited her at Houghton Hall. After a grand funeral in St Paul's Cathedral, her body was buried next to that of the Earl, in the family vault, under the steps leading to the choir stalls in Salisbury Cathedral. A plaque on the wall nearby remembers her.

In addition to her closet drama Antonius, a translation of the French play Marc-Antoine (1578) by Robert Garnier, Mary is known to have translated two other works: A discourse of life and death by Philippe de Mornay, which was published with Antonius in 1592; and Petrarch’s The triumph of death, which circulated in manuscript. Her original poems include the pastoral, “A dialogue betweene two shepheards, Thenot and Piers, in praise of Astrea,” and the two dedicatory addresses, one to Elizabeth I and one to her brother Philip, contained in the Tixall manuscript copy of her verse psalter. An elegy for Philip, “The dolefull lay of Clorinda,” which was published in Colin Clouts come home againe (1595), has been attributed to both Spenser and to Mary Herbert, but Pamela Coren is probably right to attach the work to Spenser, and certainly right to assert that Mary’s poetic reputation does not suffer from the loss of the attribution.[11]

Although the psalms were not printed during in her lifetime, they had an extensive manuscript publication. There are 17 extant manuscripts today—a considerable number. A later engraving of Herbert shows her holding them.[12] Her influence—through literary patronage, through publishing her brother's works and through her own verse forms, dramas, and translations—can be assessed in a number of ways. Contemporary poets who commended Herbert’s verse psalms include Daniel, Davies, Donne, Drayton, Sir John Harington, Ben Jonson, Aemelia Lanyer, and Thomas Moffet. The importance and influence of the Psalter translation is evident in the devotional lyric poems of Barnabe Barnes, Nicholas Breton, Henry Constable, Francis Davison, Giles Fletcher, and Abraham Fraunce—and its influence upon the later religious poetry of Donne, George Herbert, Henry Vaughan, and John Milton has been critically recognized since Louis Martz placed it at the start of a developing tradition of seventeenth-century devotional lyric.

There has been speculation that she wrote Shakespeare’s plays[citation needed], but there is little evidence for the claim. There is no correspondence between her works and those of Shakespeare in terms of source material, theological (or political) position, education, imagination, style, structure or sense. Any philological record that scholars would look for—repetition of words, neologisms, image clusters, verbal echoes—are all lacking in the relation of these two bodies of work. Most tellingly, as is the case with the comparison of Shakespeare to many other noble and/or university educated authors, is the fact that Herbert’s education—particularly in the area of foreign languages—exceeds that of the author of Shakespeare’s plays. A cursory glance at Shakespeare’s source material tells us that he resorted to English translation when using a source originally in Greek, Italian, or French.[13] (One possible exception is a French source for All's Well That Ends Well.)[14] By contrast, the works of Mary Sidney Herbert betray an expertise in all of these languages, and arguments have been made for her additional knowledge of Hebrew.

Her poetic epitaph, which is ascribed to Ben Jonson but which is more likely to have been written in an earlier form by poets William Browne and her son William, summarizes how she was regarded in her own day:

Underneath this sable hearse,
Lies the subject of all verse,
Sidney's sister, Pembroke's mother.
Death, ere thou hast slain another
Fair and learned and good as she,
Time shall throw a dart at thee.

Mary Sidney was aunt to the poet Lady Mary Wroth (the daughter of her brother, Robert Sidney).

June and Paul Schlueter published an article in The Times Literary Supplement of 23 July 2010, in which they described a manuscript of newly discovered works by Mary Sidney Herbert.[15]