Mary Somerset, Duchess of Beaufort (baptised 16 December 1630 – 7 January 1715)[1] also known by her other married name of Mary Seymour, Lady Beauchamp and her maiden name Mary Capell, was an English noblewoman, gardener and botanist.[2][3] 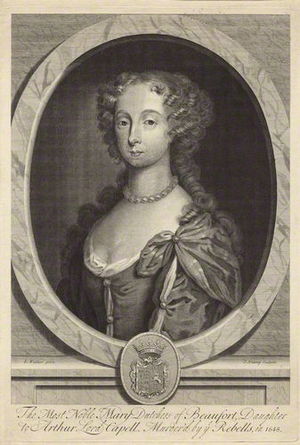 Mary was born in Hadham Parva, Hertfordshire, England sometime before 16 December 1630, on which date she was baptised. She was the daughter of Sir Arthur Capell, 1st Baron Capell of Hadham and Elizabeth Morrison.[1]

On 28 June 1648, Mary married her first husband Henry Seymour, Lord Beauchamp, and they had one son and one daughter. Her husband was a Royalist, imprisoned during the English Civil War. Her second husband, whom she married on 17 August 1657 was Henry Somerset, who became 1st Duke of Beaufort, by whom she had six children.[1]

During the Popish Plot, she was required in her husband's absence to call out the militia, to deal with a false alarm of a French invasion at the Isle of Purbeck, and did so "in a state of deadly fear". The supposed invasion, like much that happened during the Plot, was simply the result of public hysteria.[4] Despite this moment of panic, in general she maintained a detached attitude to the Plot, expressing her amazement that the informer William Bedloe, whom she knew to be "a villain whose word would not have been taken at sixpence", should now have "power to ruin any man".[5] She attended the trial of the Catholic lawyer Richard Langhorne, presumably in case Bedloe, a bitter enemy of her husband, made any charges against him, and took notes of the evidence. When Bedloe protested at her presence, the Lord Chief Justice, William Scroggs, pointed out that the trial was open to the public, and asked irritably what a woman's notes amounted to anyway: "no more than her tongue, truly".[6]

She was a notoriously exacting employer "striking terror in the hearts of her servants":[7] every day she would do a tour of the house and grounds, and any servant not found hard at work was instantly dismissed.[8] Even neighbouring landowners held her in awe, and were anxious not to cross her.[8]

Widowed in 1699/1700, she died on 7 January 1715 in Chelsea, London, England at the age of 84. She was buried at St Michael and All Angels Church in Badminton, Gloucestershire. Her many descendants included Diana, Princess of Wales, and the Dukes of Beaufort.

The Duchess of Beaufort was one of Britain's earliest distinguished lady gardeners, Alice Coats observes.[9] She began seriously to collect plants in the 1690s,[10] and her interest in gardening intensified in her widowhood.[11] She had the assistance of such well-known gardeners and botanists as George London and Leonard Plukenet; seeds came to her from the West Indies, South Africa, India, Sri Lanka, China and Japan.[12] In 1702 she engaged the services of William Sherard as tutor for her grandson, "hee loving my diversion so well. Sherard introduced more than 1500 plants, most of them greenhouse subjects, to her collection, at Badminton House or at Beaufort House, Chelsea. Her London house was next to that of Sir Hans Sloane, making her a neighbour of the Chelsea Physic Garden.[13] Her herbarium, in twelve volumes, 'gathered and dried by order of Mary Duchess of Beaufort',[14] she bequeathed to Sir Hans Sloane, by whose bequest it came to the Natural History Museum.[15] Her two-volume florilegium of drawings by Everard Kickius of her most choice exotics remains in the library at Badminton.[16] Among her introductions to British gardening, most of which were greenhouse plants, are Pelargonium zonale one of the parents of the zonal pelargoniums of gardens, ageratum and the Blue Passion Flower (Passiflora caerulea).[17] The genus Beaufortia, erected in the 19th century by Robert Brown to describe some Myrtaceous plants of Southwest Australia, commemorates her.

Her portrait was painted by Sir Godfrey Kneller in 1708. Sir Peter Lely's portrait of the Duchess with the Countess of Carnarvon is at the Metropolitan Museum of Art.