Mary Tudor (/ˈtuːdər, ˈtjuː-/; 18 March 1496 – 25 June 1533), the third daughter of Henry VII of England and Elizabeth of York, was Queen of France. Mary became the third wife of Louis XII of France, more than 30 years her senior. Following his death, she married Charles Brandon, 1st Duke of Suffolk. The marriage, which was performed secretly in France, took place without her brother's consent. This necessitated the intervention of Thomas Wolsey and although the couple were eventually pardoned by Henry VIII, they were forced to pay a large fine.

Mary's second marriage produced four children; and through her eldest daughter Frances, Mary was the maternal grandmother of Lady Jane Grey, who was the de facto monarch of England for a little over a week in July 1553. 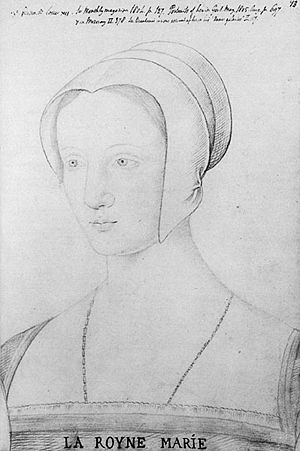 Mary was the fourth child of Henry VII of England and Elizabeth of York, and the youngest to survive infancy. She was born at Sheen Palace, "most probably" in March 1496. A privy seal bill dated from midsummer 1496 authorizes a payment of fifty shillings to her nurse, Anne Skeron. Also, Erasmus stated that she was four years old when he visited the Royal nursery in 1499-1500.[1]

At age six, she was given her own household, complete with "a staff of gentlewomen assigned to wait upon her," a schoolmaster, and a physician. She was given instruction in French, Latin, music, dancing, and embroidery.[1]

As children, Mary and her brother, the future King Henry VIII, shared a close friendship. He would name his first surviving child, the future Queen Mary I, in her honour. They lost their mother when Mary was just seven, and given the number of bills paid to her apothecary between 1504 and 1509, it would appear that Mary's own health was fragile.[1]

Known in her youth as one of the most beautiful princesses in Europe,[2] Erasmus said of her that "Nature never formed anything more beautiful."[3]

In 1506, during a visit from King Philip of Castile (Philipp von Habsburg), Mary was called upon to entertain the guests, dancing, and playing the lute and clavicord. The following year, King Philip died, and on 21 December 1507, Mary was betrothed to his son, Charles of Castile, later Holy Roman Emperor. The betrothal was called off in 1513.[1]

Instead, Cardinal Wolsey negotiated a peace treaty with France, and on 9 October 1514, at the age of 18, Mary married the 52-year-old King Louis XII of France at Abbeville. One of the Maids of Honour who attended her in France was Anne Boleyn. Despite two previous marriages, Louis had no living sons, and sought to produce an heir; but he died on 1 January 1515, less than three months after marrying Mary, reputedly worn out by his exertions in the bedchamber, but more likely from the effects of gout.[4] Their union produced no children. Following Louis' death, the new King Francis I made attempts to arrange a second marriage for the beautiful widow.[1]

Mary had been unhappy with her marriage of state to Louis, as at this time she was almost certainly already in love with Charles Brandon, 1st Duke of Suffolk. Henry was aware of his sister's feelings; letters from 1515 indicate that Mary agreed to wed Louis only on condition that "if she survived him, she should marry whom she liked."[5] However, Henry wanted any future marriage to be to his advantage. The King's council, not wishing to see Brandon gain further power at Court, were also opposed to the match. Meanwhile, rumours swirled in France that she would wed either the Duke of Lorraine or the Duke of Savoy. A pair of French friars actually went so far as to warn Mary that she must not wed Brandon, because he "had traffickings with the devil."[1]

When Henry sent Brandon to bring Mary back to England in late January 1515, he made the Duke promise that he would not propose to her.[6] Once in France, Mary persuaded Brandon to abandon this pledge. The couple wed in secret at the Hotel de Clugny on 3 March 1515, in the presence of just ten people, among them the young King Francis.[7] Technically this was treason, as Brandon had married a Royal Princess without Henry's consent.[8] The King was outraged, and the Privy Council urged that Brandon should be imprisoned or executed. Because of the intervention of Thomas Wolsey, and Henry's affection for both his sister and Brandon, the couple were let off with a heavy fine.[9][10] The fine of £24,000 – approximately equivalent to £7,200,000 today – was later reduced by Henry.[9] They officially married on 13 May 1515 at Greenwich Palace in the presence Henry and his courtiers.[1] 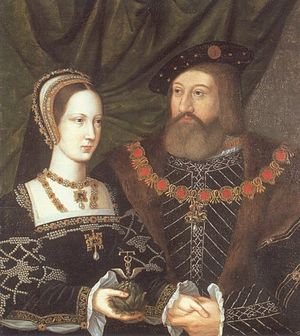 Mary was Brandon's third wife, and he had two daughters, Anne and Mary by his second marriage to Anne Browne. She had died in 1511. Mary would raise the girls alongside her own children. Even after her second marriage, Mary was normally referred to at the English Court as "the French Queen", and was not known as "the Duchess of Suffolk" in her lifetime,[11] despite being legally allowed to be. Mary spent most of her time at the Duke's country seat of Westhorpe Hall in Suffolk.[12]

In the late 1520s, relations between Henry VIII and Mary were strained when she opposed the King's attempt to obtain an annulment of his marriage to Catherine of Aragon, whom Mary had known for many years. Mary developed a strong dislike for Anne Boleyn,[13] whom she had first encountered in France.[14] Anne and her sister Mary were among the Maids of Honour in the entourage that had accompanied Mary to France for her wedding to King Louis.[15]

Mary died at Westhorpe, Suffolk, on 25 June 1533, and was first interred "with much heraldic ceremony" at Bury St Edmunds Abbey. Five years later, when the monastery was dissolved, Mary's body was removed to nearby St Mary's Church, Bury St. Edmunds. In 1784, her remains were disinterred, her coffin opened, and locks of her hair were taken by Horace Walpole, the Duchess of Portland, and several others.[14]

Mary's widower would later marry their son's betrothed, who was also his ward, the fourteen-year-old Catherine Willoughby, by whom he had two sons.[16]

Mary and Charles's two sons, both named Henry, are commonly mistaken for being the same son. Both boys died when they were children.

The drama series The Tudors:[17] portrays the relationship between Mary and Charles Brandon, though the character is named Princess Margaret, and is a composite of Mary and her sister Margaret Tudor, portrayed by Gabrielle Anwar. Charles Brandon is portrayed by Henry Cavill. Many liberties have been taken with the story. For example, in the television series, Henry arranges his sister's marriage with the aged King of Portugal (who, at the time, would be John III of Portugal, in his twenties), not of France, in the mid-1520s. Margaret/Mary then kills her husband. Another fictitious sub-plot has Henry making Charles Brandon Duke of Suffolk so the latter would be of appropriate rank to give away Henry's sister at her supposed wedding to the King of Portugal. In the story, the Tudor/Brandon marriage soon cools and no mention is made of their four children.

She is the main character in several historical fiction novels: