Mary Wigman (born Marie Wiegmann, 13 November 1886 – 18 September 1973) was a German dancer, choreographer, notable as the pioneer of expressionist dance, dance therapy, and movement training without pointe shoes. She is considered one of the most important figures in the history of modern dance.[1] She became one of the most iconic figures of Weimar German culture and her work was hailed for bringing the deepest of existential experiences to the stage. 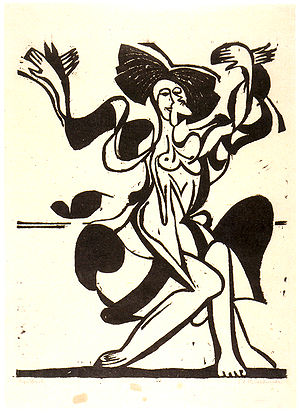 She came to dance comparatively late after seeing three students of Émile Jaques-Dalcroze, who aimed to approach music through movement using three equally-important elements: solfège, improvisation and his own system of movements, eurhythmics.[2] Another key early experience was a solo concert by Grete Wiesenthal.[3]

In 1913, she was introduced to Rudolf von Laban and following his lead, she worked upon a technique based in contrasts of movement; expansion and contraction, pulling and pushing. During the First World War she worked as Laban's assistant in Leipzig.[3]

In 1920, Wigman was offered the post of ballet mistress at the Dresden Opera House, but conflict cut this short.[clarification needed]

In the school year 1920/1921,[5] Wigman instead started her own dance school which became known as "Dresden Central School" or simply "Mary Wigman-Schule", a center of new, expressionist dance. The rivalry and competition between her new school and the old schools of dance in Dresden emerged, especially with the Palucca School, Dresden.[5] 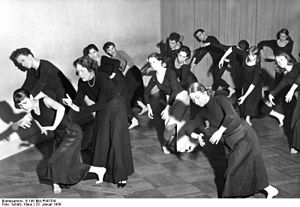 Her students and collaborators from Europe included Yvonne Georgi, Hanya Holm, Harald Kreutzberg, Gret Palucca, Max Terpis, Irena Linn, Elisabet Wiener, Sonia Revid, Margarethe Wallmann, Inge Weiss, and Meta Vidmar who in 1930 established the first school of modern dance in Slovenia. Opera-dancer Ursula Cain (*1927), who at the age of more than 80 years could still be seen on stage and TV dancing in cross-genre projects like Dancing with Time by Heike Hennig, was another student of the Mary Wigman.

Mary Wigman toured the United States in 1930 with her company of dancers; a school was founded by her disciples in New York City in 1931. Her choreography inspired communist dance troupes in the 1930s in New York City[6] Her work in the United States is credited to her protegee Hanya Holm, and then to Hanya's students Alwin Nikolais and Joanne Woodbury. Another student and protegee of Wigman's, Margret Dietz, taught in America from 1953 until 1972.

The "Mary Wigman-Schule" existed from 1920 until 1942 and continued to operate under Nazi rule in World War II, when she obeyed the rule of government and fired all the Jewish dancers from her schools in Germany.

What had been the Mary Wigman-Schule was started again after the war by Dore Hoyer. Hoyer and the school created a Dances for Käthe Kollwitz which they performed in Dresden in 1946.[7]

Wigman taught again in Leipzig in 1948. From 1950 until her death in 1973, she taught at a studio in West Berlin, where Susanne Linke was among her students. 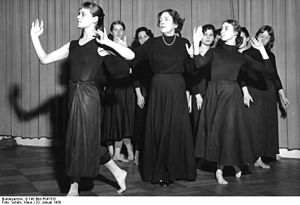 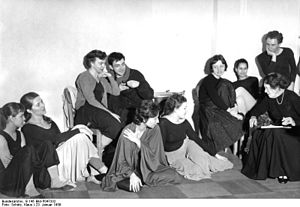 Wigman's first public production was the Hexentanz, performed without music, in late 1913.

While recovering from her nervous breakdown, Wigman wrote the choreography for her first group composition, 'Witch Dance', after which her career and influence began in earnest.

In 1925 the Italian financier Riccardo Gualino invited Wigman to Turin to perform in his private theater and in his newly opened Teatro di Torino.[8] She had several years' success on the concert stage.

Wigman's dances were often accompanied by world music and non-Western instrumentation, such as fifes and primarily percussion, bells, including the gongs and drums from India, Thailand, Africa, and China, contrasted with silence.

She would often employ masks in her pieces, influenced again by non-western/tribal dance.