Marywood University is a co-educational, Catholic liberal arts university located on a 115-acre (0.47 km2) campus in Scranton, Pennsylvania, USA within the Diocese of Scranton. Established in 1915 by the Sisters, Servants of the Immaculate Heart of Mary, Marywood currently enrolls more than 3,400 students in a variety of undergraduate, graduate, and doctoral programs. The university has a national arboretum with more than 100 types of trees and shrubs. Marywood's Catholic identity coupled with its mission to educate students to "live responsibility in an interdependent world" encourages students to be socially responsible agents of change.

The Sisters, Servants of the Immaculate Heart of Mary came to Scranton, Pennsylvania and established St. Cecilia's Academy in 1878 "for young ladies". Mount St. Mary's Seminary opened in 1902. Mother Cyril Conroy, superior in 1901, deliberately chose the term "seminary" (roughly equivalent to a high school in present times) to avoid the suggestion of a finishing school – which was a much more common destination at that time for older girls who could afford to continue their education – as it was intended to be "a place where young scholars dedicated themselves to serious study". The Motherhouse was co-located with the seminary. Its buildings suffered major damage during a fire in the 1970s. As a result, Scranton Preparatory School, then a boys' school, became co-educational to accommodate the girls.[2] The arch, now known as "Memorial Arch", which stood at the entrance to the seminary-cum-motherhouse still stands on the present-day campus and the former seminary's name can be seen engraved on it.

The seminary was the next time step to the Sisters' ultimate goal: to open a women's college in Scranton. Marywood College opened with 34 students and Mother Germaine O'Neil as president and treasurer. It was the fifth Catholic women's college in the United States.[3] The first batch of students graduated in 1919 with a Bachelor of Arts, Bachelor of Science or Bachelor of Letters. By the 1930s, the college had diversified its curriculum, offering subjects ranging from the social sciences to pre-medicine.[4] In 1937, the Sisters turned down an invitation to merge with St. Thomas College, then under the Christian Brothers. St. Thomas later came under the administration of the Jesuits after World War II and is now the University of Scranton.[5]

By the 1970s, other single-sex Catholic colleges and universities in the Diocese such as College Misericordia and King's College were becoming co-educational and Marywood followed suit, opening its doors to male students in the fall of 1989.[6] In 1997 it was granted university status by the Pennsylvania Department of Education.[7]

Marywood University is an NCAA Division III school and member of the Colonial States Athletic Conference (CSAC) and Eastern College Athletic Conference (ECAC). The official name given is the Marywood Pacers. Marywood currently[when?] competes at the varsity level in baseball, basketball, cross-country, field hockey, golf, lacrosse, soccer, softball, swimming and diving, tennis, and volleyball. In addition, Marywood has announced it will add track and field to its roster of varsity sports in 2014.[8] Students may also choose from more than 30 intramural programs, including club sports, as well as fitness options, recreational classes and activity clubs. 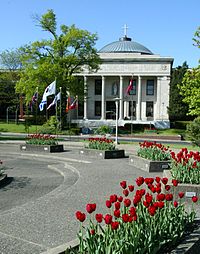 The Rotunda The Liberal Arts Center, completed in 1923, is crowned with one of the campus' most distinctive architectural features, the dome of the Rotunda. foreground, Memorial Commons 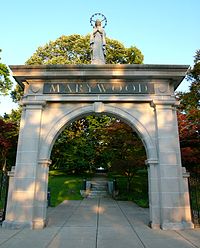 The Memorial Arch, built in 1902, marks the entrance to the original Motherhouse, which was the location of St. Mary's Seminary. 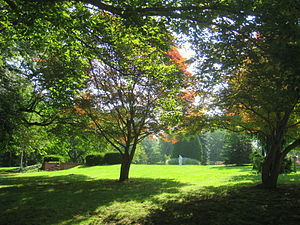 Marywood University was declared an arboretum in 1975 in honor of Sister Maria Laurence Maher, then Professor of Biological Sciences, and received its official designation as such in 1997. It now contains 42 species of trees (103 varieties) and a comparable collection of shrubs, ornamental grasses and flowers.[10]