The Masaryk circuit (Czech: Masarykův okruh) or Masarykring, now referred to as the Brno Circuit, refers to two motorsport race tracks located close to the city of Brno, Czech Republic The original street circuit was made up of public roads, and at its longest measured nearly 19 miles (31 km). In the 1930s, events such as the Masaryk Grand Prix attracted top teams and drivers. The track is named after the first president of Czechoslovakia, Tomáš Masaryk. Racing on the old roads ended after 1986, when the new (current) circuit was opened.

The Czech Republic Motorcycle Grand Prix has always been more of a promoter event than a profit-raiser in itself,[2] tobacco advertising has been banned since 2007. 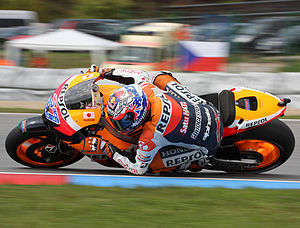 The original layout ran anti-clockwise on approximately 31 km (19 mi) of public roads west of Brno, including the villages of Bosonohy and Žebětín. From 1930 to 1937, the Masaryk Grand Prix attracted some of the top drivers and teams.

The renamed Czechoslovakian Grand Prix in 1949 was run clockwise on a shorter 17.8 km (11.1 mi) layout around Kohoutovice. In spite of a crowd in excess of 400,000 people, this would be the last Grand Prix for cars on the old circuit.

The current permanent road racing circuit was opened in 1987. It lies north of Kyvalka, within the bounds of the circuit used in the 1930s, but not incorporating any of the public roads. The motorcycle race moved to the new circuit and regained its status as a round of the world championship. A World Sports Car Championship race was held in 1988, and a round of the A1 Grand Prix series in 2006. It is also the location of 6 Hours of Brno.