Masirah or Mazeira Island (Arabic: مصيرة‎‎) is an island off the East coast of Oman, 95 km long north-south, between 12 and 14 km wide, with an area of about 649 km², and a population estimated at 12,000 in 12 villages mainly in the north of the island (9,292 as of the census of 2003, of which were 2,311 foreigners). Administratively, it forms one of the eleven provinces (Arabic: ولاية, plural ولايات, transliteration: wilayah, plural wilayat) of the Ash Sharqiyah Region. The principal village is Ras-Hilf in the northern part of the island. It contains a Royal Air Force of Oman air base and a fish factory, as well as a few small towns. Previously, the BBC had a relay facility consisting of both HF and MF broadcasting transmitters stationed there. Most of the island's interior is deserted, with access to the island only possible by a small ferry for cars or by Royal Air Force of Oman Airbus A320 or Lockheed C-130 Hercules flights.

The rugged terrain of the island and surrounding rough coastline has led to the appearance of many wrecked dhows on the beaches of the island, most of them well preserved by the salt water and intense heat. About 2:20 A.M. on 21 September 1835, the USS Peacock grounded on a coral reef. At high noon, the latitude was determined to be 20° 00′ north, and the longitude 58° 5″ east. Peacock later obtained this letter:[1]

I certify that during the period I have navigated the Arabian coast, and been employed in the trigonometrical survey of the same, now executing by order of the Bombay government, that I have ever found it necessary to be careful to take nocturnal as well as diurnal observations, as frequent as possible, owing to the rapidity and fickleness of the currents, which, in some parts, I have found running at the rate of three and four knots an hour, and I have known the Palinurus set between forty and fifty miles dead in shore, in a dead calm, during the night.

It is owing to such currents, that I conceive the United States ship of war Peacock run aground, as have many British ships in previous years, on and near the same spot; when at the changes of the monsoons, and sometimes at the full and change, you have such thick weather, as to prevent the necessary observations being taken with accuracy and the navigator standing on with confidence as to his position, and with no land in sight, finds himself to his sorrow, often wrong, owing to a deceitful and imperceptible current, which has set him with rapidity upon it. The position of Mazeira Island, is laid down by Owen many miles too much to the westward.

The ocean bottom environment surrounding Masirah is hostile as the majority of the area is covered in either sand or hard rock. There is a swift current flowing through the area with a very sharp halocline visible on the surface of the ocean. The water depth nearby is around 10 m and is not conducive to side-scan sonar searches due to the shallow water and choppy surface conditions. Despite the poor quality ocean bottom, the area is very productive with marine fisheries, and any hard objects (barrels, engines) are immediately colonized by local fauna.

During summer there is normally a constant strong wind which is ideal for kite and windsurfers. Big waves are a result of the wind on the sea side and is so also attractive for wave surfers. Kite and windsurfers can pick spots around the island according to their skill and what conditions they prefer.

On 5–6 June 2007, 7000 people on the island were forced to temporarily leave their homes due to the high storm waves produced by the powerful Cyclone Gonu, the strongest to hit the Persian Gulf region in 60 years. 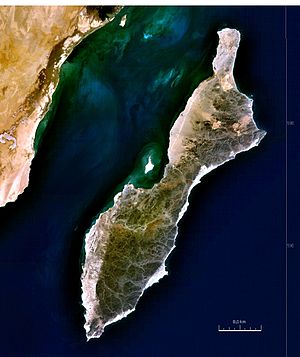 Jabal Madrub, a 256 m high mountain, stands about 13 km south of the north end of the island.

Ras Kaydah, a small and rocky headland, has a conspicuous, conical hill about 20 m high nearby. There are small islets 600 m east and four km north of Ras Kayda.

The coast between Ras Kaydah and Ras Zafaranat, about 27 km to the northeast, is regular with a few small rounded projections and a low rocky beach. Haql (Hakkan), a small village in a grove of trees, lies close to the shore about eight km north of Ras Kaydah.

Between Ras Abu Rasas and Ras Kaydah, about 18 km to the northeast, the coast is indented by small, sandy bays fringed by rocks.

Ras al Ya, about three km northeast of Ras Zafaranat, is the east extremity of the island and consists of a prominent bluff rising to a ridge of hills which extend westward to the center of the island.

Ras al Jazirah, about six km north-northwest of Ras al Ya, is rocky and well-marked by a black patch on its south side. A sharp peak, rising to a height of 95 m, stands about three km west of this point.

Saiq has a hot desert climate (Köppen climate classification BWh) with hot summers and warm winters. Precipitation is low, and falls mainly from February to April as well as in the brief monsoon season from June to August. 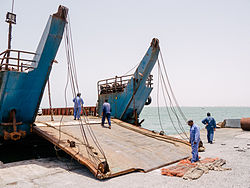 Masirah Island has just opened for tourism.[3] You can still only get to the island by ferry, managed by the National Ferry Company www.nfc.om, which runs six times a day between Shannah to Masirah. By now, there is a four-star-hotel and a kitesurfing camp. For kitesurfers, Masirah is an attractive spot in summer because of the monsoon winds which blow steadily at over 20 knots.[4]

The British established a military presence on Masirah in the 1930s. A small stone building, a fuel store for flying boats, stood at the midpoint of the island on the west side, and had a stone above the door inscribed "RAF 1936". Reputedly, the fuel store was locked and visiting aircrew used to bring a key, refuel from cans, lock the store and fly onwards. 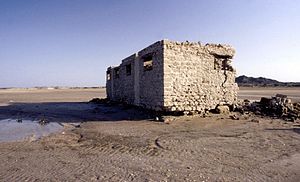 A dispute between British forces and the local inhabitants in 1942, led by one of two local sheikhs, who were eventually forced to flee the island.[5]

During WW II, The British paid the Sultan of Muscat a stipend of £18,000 per annum for affording British forces 'necessary facilities', which included Masirah. A Cabinet Office memorandum of 1945 recommended the acquisition of Masirah on a 99-year lease, US interests in the island notwithstanding (During World War II the United States also had a base on the island.). The Sultan was to be offered an annual payment of £3,750 with an initial premium of £7,500.[5] The base continued to expand into the 1970s, supporting British and Oman forces fighting insurgents during the Dhofar Rebellion and providing transit facilities for long-distance RAF flights.

The British military presence at RAF Masirah extended until 31 March 1977, when Sultan of Oman's Air Force (now the Royal Air Force of Oman) took over the base, which became first SOAF Masirah and then RAFO Masirah. The base included a HF communications hub and a rear link to SAS units based in Oman in support of the actions against rebels in the south of the country (RAF Salalah).

United States units used Masirah Island as a staging base in Operation Eagle Claw, the unsuccessful 1980 attempt to free US hostages then held in Iran. The island was subsequently used as a staging area for operations into Afghanistan in 2001.

As of 2009[update] the American private military contractor DynCorp had a contract to staff and serve a US military storage-depot at this base.[citation needed]