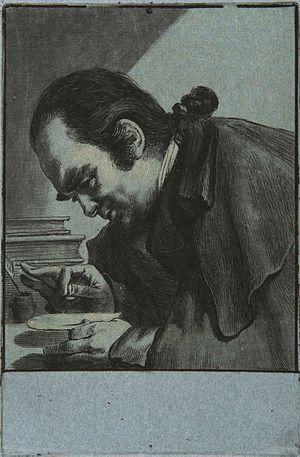 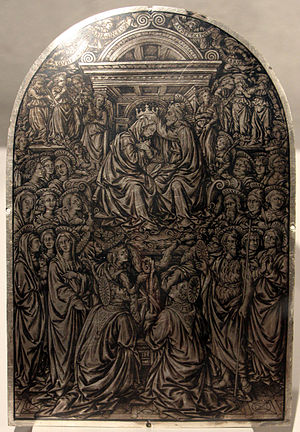 Coronation of the Virgin, 1452, Bargello

Maso Tommasoii Finiguerra (1426–1464) was an Italian goldsmith, draftsman, and engraver working in Florence, whose name is distinguished in the history of art and craftsmanship for reasons which are partly mythical.

Giorgio Vasari claims Finiguerra invented the printmaking technique of engraving (using that word in its popular sense of taking impressions on paper from designs engraved on metal plates to create prints). This made him a crucial figure in the history of old master prints and remained widely believed until the early twentieth century. However, it was gradually realised that Vasari's view, like many of his assertions as to the origins of technical advances, could not be sustained. Typically, Vasari had overstated the importance of a fellow-Florentine, and a fellow-Italian, since it is now clear that engraving developed in Germany before Italy. Although he clearly was an important artist of his time, few surviving works, and no surviving prints, can now be definitely attributed to him, so scholarly interest in him has greatly reduced.

He was the son of Antonio, and grandson of Tommaso Finiguerra or Finiguerri, both goldsmiths of Florence, and was born in Santa Lucia d'Ognissanti in 1426. He worked with his family as a goldsmith and was early distinguished for his work in niello. In 1449, there is a note of a sulfur cast from a niello of his workmanship being handed over by the painter Alessio Baldovinetti to a customer in payment or exchange for a dagger. In 1452 Maso delivered and was paid for a niellated silver pax commissioned for the baptistery of St. John by the consuls of the guild of merchants or Calimara.

By then, he seems to have left his fathers workshop: and partnered with Piero di Bartolommeo di Sail and Antonio Pollaiuolo in 1457, when the firm had an order for a pair of fine silver candlesticks for the church of San Jacopo at Pistoia. In 1459 in the Palazzo Rucellai, artworks by Finiguerra are annotated as belonging to Giovanni Rucellai. In 1462 he is recorded as having supplied another wealthy Florentine, Cino di Filippo Rinuccini, with waist buckles, and in the years next following with forks and spoons for christening presents. In 1463 he drew cartoons, the heads of which were colored by Alessio Baldovinetti, for five or more figures for the sacristy of the duomo, which was being decorated in wood inlay by a group of artists with Giuliano da Maiano at their head. On 4 December 1464 Maso Finiguerra made his will, and died shortly afterwards.

These documented facts are supplemented by several writers of the next generation. Baccio Bandinelli said Finiguerra was among the young artists under Lorenzo Ghiberti working on the famous gates of the Baptistery, Florence; Benvenuto Cellini said he was the finest master of his day in niello engraving, and that his masterpiece was a pax of the Crucifixion in the baptistery of St. John; that being no great draftsman, he in most cases, including that of the above-mentioned pax, worked from drawings by Antonio del Pollaiolo. Vasari, on the other hand, claims that Finiguerra an inferior draughtsman to Pollaiuolo, mentions a number of original drawings by him as existing in Vasari's own collection, with figures both draped and nude, and histories drawn in watercolor. Vasari's account was confirmed and amplified in the next century by Baldinucci, who says that he has seen many drawings by Finiguerra in the manner of Masaccio; adding that Maso was beaten by Pollaiuolo in competition for the reliefs of the great silver altar-table commission by the merchants guild for the baptistery of St. John (this famous work is now preserved in the Opera del Duomo).

But the paragraph of Vasari which has chiefly held the attention is that in which he gives Finiguerra credit of having been the first to print impressions from niello plates on sulfur casts and afterwards on sheets of paper, and of having followed up this invention by engraving copperplates for the express purpose of printing impressions, and thus the inventor of the art of engraving for printing and printmaking. Finiguerra, adds Vasari, was succeeded in the practice of engraving at Florence by a goldsmith called Baccio Baldini, who borrowed his designs from other artists and especially from Botticelli. In the last years of the 18th century, Vasari's account of Finiguerra's invention was held to have received a decisive and startling confirmation under the following circumstances. There was in the Baptistery at Florence (now in the Bargello) a beautiful 15th-century niello pax of the Coronation of the Virgin. The Abate Gori, a connoisseur of the mid-century, had claimed this conjecturally for the work of Finiguerra; a later and still more enthusiastic virtuoso, the Abate Zani, discovered first, in the collection of Count Seratti at Ligorno, a sulfur cast from the very same niello (cast now in the British Museum), and then, in the Bibliotheque Nationale de France, Paris, a paper impression corresponding to both. Here, then, he proclaimed, was the actual material first fruit of Finiguerra's invention and proof positive of Vasari's accuracy.

Zani's famous discovery is now discredited among serious students. For one, the art of printing from engraved copperplates had been known in Germany and in Italy for years prior to the date of Finiguerra's alleged invention. For another, Finiguerra's pax for the baptistery, if Cellmni is to be trusted, represented not a Coronation of the Virgin but a Crucifixion. In the next place, its recorded weight does not at all agree with that of the pax claimed by Gori and Zani to be his. Again, and perhaps this is the strongest argument of any, all authentic records agree in representing Finiguerra as a close associate in art and business of Antonio Pollaiuolo. Now nothing is more marked than the special style of Pollaiuolo and his group; and nothing is more unlike it than the style of the Coronation pax, the designer of which must obviously have been trained in quite a different school, namely that of Filippo Lippi.

The only fully authenticated specimens which exist are the above-mentioned tarsia figures, over half life-size, executed from his cartoons for the sacristy of the duomo. But he is thought to be responsible for a number of other works: a set of drawings of the school of Pollaiuolo at the Uffizi, some of which are actually inscribed "Maso Finiguerra" in a seventeenth-century writing, probably that of Baldinucci himself; and secondly in a very curious and important book of nearly a hundred drawings by the same hand, acquired in 1888 for the British Museum.

The Florence series depicts for the most part figures of the studio and the street, to all appearance members of the artists own family and workshop, drawn direct from life. The museum volume, on the other hand, is a picture-chronicle, drawn from imagination, and representing parallel figures of sacred and profane history, in a chronological series from the Creation to Julius Caesar, dressed and accoutered with inordinate richness according to the quaint pictures which Tuscan popular fancy in the mid-15th century conjured up to itself of the ancient world. Except for the differences naturally resulting from the difference of subject, and that the one series are done from life and the other from imagination, the technical style and handling of the two are identical and betray unmistakably a common origin.

How the works were attributed to Finiguerra

Both can be dated with certainty, from their style, costumes, etc., to within a few years of 1460. Both agree strictly with the accounts of Finiguerra's drawings left us by Vasari and Baldinucci, and disagree in no respect with the character of the inlaid figures of the sacristy. That the draftsman was a goldsmith is proved on every page of the picture-chronicle by his skill and extravagant delight in the ornamental parts of design chased and jeweled cups, helmets, shields, breastplates, scabbards and the like, as well as by the symmetrical metallic forms into which he instinctively conventionalizes plants and flowers. That he was probably also an engraver in niello appears from the fact that figures from the Uflizi series of drawings are repeated among the rare anonymous Florentine niello prints of the time (the chief collection of which, formerly belonging to the marquis of Salamanca, is now in Edmond de Rothschild Collection at the Louvre in Paris).

That he was furthermore an engraver on copper seems certain from the fact that the general style and many particular figures and features of the British Museum chronide drawings are exactly repeated in some of those primitive 15th-century Florentine prints which used to be catalogued loosely – under the names of Baldini or Botticelli – but have of late years been classed more cautiously as anonymous prints in the fine manner (in contradistinction to another contemporary group of prints in the broad manner). The fine manner group of primitive Florentine engravings itself falls into two divisions, one more archaic, more vigorous and original than the other, and consisting for the most part of larger and more important prints. It is this division which the drawings of the Chronicle series most closely resemble; so closely as almost to compel the conclusion that drawings and engravings are by the same hand. The later division of fine-manner prints represent a certain degree of technical advance from the earlier, and are softer in style, with elements of more classic grace and playfulness; their motives moreover are seldom, original, but are borrowed from various sources, some from German engravings, some from Botticelli or a designer closely akin to him, some from the pages of the British Museum Chronicle-book itself, with a certain softening and attenuating of their rugged spirit; as though the book, after the death of the original draftsman engraver, had remained in his workshop and continued to he used by his successors.

We thus find ourselves in presence of a draftsman of the school of Pollaiuolo, some of whose drawings bear an ancient attribution to Finiguerra, while all agree with what is otherwise known of him, and one or two are exactly repeated in extant works of niello, the craft which was peculiarly his own; others being intimately related to the earliest or all but the earliest works of Florentine engraving, the kindred craft which tradition avers him to have practiced, and which Vasari erroneously believed him to have invented. Surely, it has been confidently argued, this draftsman must be no other than the true Finiguerra himself.