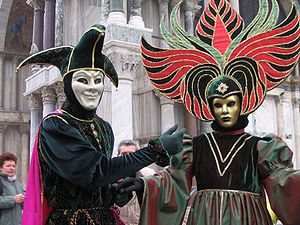 Masquerade ball at the Carnival of Venice 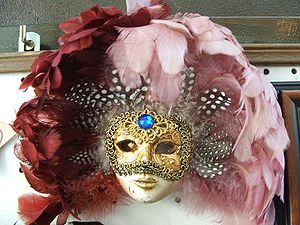 A Venziana mask from Verona, Italy.

A masquerade ball (or bal masqué) is an event in which the participants attend in costume wearing a mask. (Compare the word "masque"—a formal written and sung court pageant.)

Masquerade balls were a feature of the Carnival season in the 15th century, and involved increasingly elaborate allegorical Royal Entries, pageants, and triumphal processions celebrating marriages and other dynastic events of late medieval court life. The "Bal des Ardents" ("Burning Men's Ball") was held by Charles VI of France, and intended as a Bal des sauvages ("Wild Men's Ball"), a form of costumed ball (morisco). It took place in celebration of the marriage of a lady-in-waiting of Charles VI of France's queen in Paris on January 28, 1393. The King and five courtiers dressed as wildmen of the woods (woodwoses), with costumes of flax and pitch. When they came too close to a torch, the dancers caught fire. (This episode may have influenced Edgar Allan Poe's short story "Hop-Frog".) Such costumed dances were a special luxury of the ducal court of Burgundy.

Masquerade balls were extended into costumed public festivities in Italy during the 16th century Renaissance (Italian, maschera). They were generally elaborate dances held for members of the upper classes, and were particularly popular in Venice. They have been associated with the tradition of the Venetian Carnival. With the fall of the Venetian Republic at the end of the 18th century, the use and tradition of masks gradually began to decline, until they disappeared altogether. 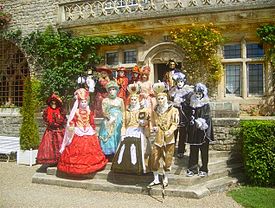 They became popular throughout mainland Europe in the 17th and 18th centuries, sometimes with fatal results. Gustav III of Sweden was assassinated at a masquerade ball by disgruntled nobleman Jacob Johan Anckarström, an event which Eugène Scribe and Daniel Auber turned into the opera Gustave III. The same event was the basis of Giuseppe Verdi's opera A Masked Ball, although the censors in the original production forced him to portray it as a fictional story set in Boston. Most masks came from countries like Switzerland and Italy.

John James Heidegger, a Swiss count who arrived in Italy in 1708, is credited with having introduced the Venetian fashion of a semi-public masquerade ball, to which one might subscribe, to London in the early eighteenth century, with the first being held at Haymarket Opera House.[1] London's public gardens, like Vauxhall Gardens, refurbished in 1732, and Ranelagh Gardens, provided optimal outdoor settings, where characters masked and in fancy dress mingled with the crowds. The reputation for unseemly behavior, unescorted women and assignations motivated a change of name, to the Venetian ridotto but as "The Man of Taste" observed in 1733;

In Lent, if masquerades displease the town,
Call 'em Ridottos and they still go down."

A standard item of masquerade dress was a "Vandyke", improvised on the costumes worn in the portraits of Van Dyck: Gainsborough's Blue Boy is the most familiar example, and a reminder of the later 18th-century popularity in England for portraits in fancy dress.

Throughout the century, masquerade dances became popular in Colonial America. Its prominence did not go unchallenged; a significant anti-masquerade movement grew alongside the balls themselves. The anti-masquerade writers (among them such notables as Samuel Richardson) held that the events encouraged immorality and "foreign influence." While they were sometimes able to persuade authorities to their views, particularly after the Lisbon earthquake of 1755, enforcement of measures designed to end masquerades was at best desultory, and the masquerades went on as semi-private "subscriptions."[2] In the 1770s, fashionable Londoners went to the masquerades organized by Teresa Cornelys at Carlisle House in Soho Square, and later to the Pantheon.

Masquerade balls were sometimes set as a game among the guests. The masked guests were supposedly dressed so as to be unidentifiable. This would create a type of game to see if a guest could determine each other's identities. This added a humorous effect to many masques and enabled a more enjoyable version of typical balls.

One of the most noted masquerade balls of the 20th century was that held at Palazzo Labia in Venice on 3 September 1951, hosted by Carlos de Beistegui. It was dubbed "the party of the century."

A new resurgence of masquerade balls began in the late 1990s in North America. More recently, the party atmosphere is emphasized and the formal dancing usually less prominent. Less formal "costume parties" may be a descendant of this tradition.

The picturesque quality of the masquerade ball has made it a favorite topic or setting in literature.