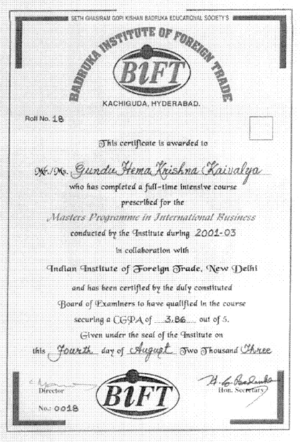 A master's degree, or masters degree in British English (from Latin magister), is an academic degree awarded by universities upon completion of a course of study demonstrating a mastery or high-order overview of a specific field of study or area of professional practice.[1] Within the area studied, graduates are posited to possess advanced knowledge of a specialized body of theoretical and applied topics; high order skills in analysis, critical evaluation, or professional application; and the ability to solve complex problems and think rigorously and independently. The master's degree may qualify the holder to teach at a college or university in certain disciplines.

The two most common titles of master's degrees are the Master of Arts (M.A.) and Master of Science (M.S., M.Sc., M.Si., or M.C.A.) degrees; these may be course-based, research-based, or a mixture of the two. Some universities use the Latin degree names; because of the flexibility of syntax in Latin, the Master of Arts and Master of Science degrees may be known as Magister artium or Artium magister and Magister scientiæ or Scientiæ magister, respectively. Harvard University, University of Chicago, and MIT, for example, use A.M. and S.M. for their master's degrees. More commonly, Master of Science often is abbreviated MS or M.S. in the United States, and MSc or M.Sc. in Commonwealth nations and Europe.

There are a range of pathways to the degree, with entry based on evidence of a capacity to undertake higher degree studies in the proposed field. A dissertation may or may not be required, depending on the program. In general, the structure and duration of a program of study leading to a master's degree will differ by country and by university.

In some systems, such as those of the United States and Japan, a master's degree is a strictly postgraduate academic degree. Particularly in the U.S., in some fields/programs, work on a doctorate begins immediately after the bachelor's degree, but the master's may be earned along the way as a 'master's degree "en route"', following successful completion of coursework and certain examinations. Master's programs are thus one to six years in duration, with two to three years being a common length of time to complete. Some universities offer evening options so that students can work during the day and earn a master's degree in the evenings.[2]

Under the Angloamerican systems many master's degrees are differentiated either as 'master (thesis)' or as 'master (non-thesis)' programs. Regardless of a de jure minimum period of a master's degree program in the same discipline, the required de facto duration to complete the program may vary highly by university. One of the main reasons of this is the fact that the required level of courses or research complexity and quality of a thesis also can vary greatly, e.g. in "very high research activity" elite universities students who are admitted to a "very high research" master (thesis), have to fulfill course and thesis level requirements at a regular PhD level, however.

By contrast, in some cases, such as the integrated master's degree in the UK, the degree is combined with a Bachelor of Science, as a four-year degree. Unlike a traditional M.Sc., the fourth year finishes at the same time as undergraduate degrees in the early summer, whereas traditional M.Sc. students typically spend the summer vacation completing a dissertation and finish in September. Examples include M.Math. (see also Part III of the Mathematical Tripos at Cambridge), M.Eng. and M.Sci. (not to be confused with an M.Sc.).

In the recently standardized European System of higher education (Bologna process), a master's degree programme normally carries 90–120 ECTS credits, with a minimum requirement of at least 60 ECTS credits at master level (one- or two-year full-time postgraduate program) undertaken after at least three years of undergraduate studies. It provides higher qualification for employment or prepares for doctoral studies. As one ECTS credit is equivalent to 25 hours of study this means that a master's degree programme should include 2250 hours of study. Current UK M.Sc./M.A. programmes tend to include 1800 hours of study (or 180 UK credits), although many claim to be equivalent to an ECTS accredited master's degree.

In countries in which a master's degree is a postgraduate degree, admission to a master's program normally requires holding a bachelor's degree, and in the United Kingdom, Canada and much of the Commonwealth, an "honours" bachelor degree.[citation needed] In both cases, relevant work experience may qualify a candidate. In some cases the student's bachelor's degree must be in the same subject as the intended master's degree (e.g. a Master of Economics will typically require a bachelor's degree with a major in economics), or in a closely allied, "cognate", discipline (e.g. Applied Mathematics degrees may accept graduates in physics, mathematics or computer science); in others, the subject of the bachelor's degree is unimportant (e.g. M.B.A.) although, often in these cases, undergraduate coursework in specific subjects may be required (e.g. some M.S.F. degrees require credits in calculus for admission, but none in finance or economics; see also under Business education#Postgraduate education). Most competitive programs also have a grade point average (GPA) that the student must have achieved in their undergraduate degree.

In some European countries, a magister is a first degree and may be considered equivalent to a modern (standardized) master's degree (e.g., the German, Austrian and Polish university Diplom/Magister, or the similar five-year Diploma awarded in several subjects in Greek, Spanish, Portuguese, and other universities and polytechnics).

In Brazil, after a regular graduation, students have the option to continue their academic career through a master (a.k.a. stricto sensu) or specialization (a.k.a. lato sensu) degrees.

At the master's degree ("mestrado", in Portuguese, also referred as " pós-graduação stricto sensu") there are 2–3 years of full-time graduate-level studies. Usually focused on academic research, the master's degree (on any specific knowledge area) requires the development of a thesis, presented (and defended) to a board of Ph.D. after the period of research. Differently, the "specialization" degree (also referred as "pós-graduação lato-sensu"), also comprehends a 1–2 years studies, but do not require a new thesis to be purposed and defended, being usually attended by professionals looking for a complimentary formation on a different knowledge area than their original graduation.

In addition, a great part of Brazilian universities offers a M.B.A. (Master of Business Administration) degree. Those, nevertheless, are not the equivalent of US M.B.A. degree though, as it does not formally certifies the student/professional with a master's degree (stricto-sensu) but a post-graduation degree instead. A regular post-graduation course has to comply with a minimum of 360 class-hours, while a M.B.A. degree has to comply with a minimum of 400 class-hours. Master's degree (stricto sensu) does not requires minimum class-hours, but it's practically impossible to finish it before 1,5 year due the workload and research required; an average time for the degree is 2,5 years.

Often serves as additional qualification for those seeking a differential on the job market, or for those who want to pursue a Ph.D. It corresponds to the European (Bologna Process) 2nd Cycle or the North American master's.

Hong Kong requires one or two years of full-time coursework to achieve a master's degree.

For part-time study, two or three years of study are normally required to achieve a postgraduate degree.

As in the United Kingdom, M.Phil. or Master of Philosophy is a research degree awarded for the completion of a thesis, and is a shorter version of the Ph.D.

Both M.A. and M.S. are offered in all major subjects.

In the Indian system, a master's degree is a postgraduate degree following a Bachelor's degree and preceding a Doctorate, usually requiring two years to complete. The available degrees include:

In Nepal, after bachelor's degree about to at least three or four years with full time study in college and university with a entrance test for those people who want to study further can study in master and further Ph.D. and Doctorate degree. All Doctoral and Ph.D or third cycle degree are based on research and experience oriented and result based. Master of Engineering (M.Eng.), Master of Education (M.Ed.), Master of Arts (M.A.) and all law and medicine related courses are studied after completion of successful bachelor towards doctoral degree. M.B.B.S. is only a medical degree with six and half years of study resulting medical doctor and need to finish its study until Doctor of Medicine (M.D.) and other all courses leds to Ph.D leads to Doctor of Philosophy after finishing the study and research in related field about 3 to 4 years of period joining after master degree with minimum education with 15 or 16 years of University Bachelor degree education. The most professional and internationalised program in Nepal are:

In Taiwan, bachelor's degrees are about four years (with honors) and there is an entrance examination required for people who want to study in master and Ph.D. degrees. The courses offered for master and PhD normally are research-based.

The most foreign-friendly programs in Taipei, Taiwan are at:

Programs are entirely in English and tuition is less than would be paid in North America, with as little as US$5000 for an M.B.A.[citation needed]

As an incentive to increase the number of foreign students, the government of Taiwan and universities have made extra efforts to provide a range of quality scholarships available.[citation needed] These are university-specific scholarships ranging from tuition waivers, up to NT$20,000 per month. The government offers the Taiwan Scholarship ranging from NT$20,000–30,000 per month for two years. (US$18,000–24,000 for a two-year program)