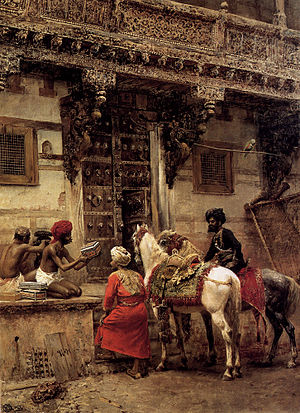 A master craftsman or master tradesman (sometimes called only master or grandmaster, German: Meister) was a member of a guild. In the European guild system, only masters and journeymen were allowed to be members of the guild.

An aspiring master would have to pass through the career chain from apprentice to journeyman before he could be elected to become a master craftsman. He would then have to produce a sum of money and a masterpiece before he could actually join the guild. If the masterpiece was not accepted by the masters, he was not allowed to join the guild, possibly remaining a journeyman for the rest of his life.

Originally, holders of the academic degree of "Master of Arts" were also considered, in the Medieval universities, as master craftsmen in their own academic field.

The Guild of Master Craftsmen continues a tradition established by the guilds of medieval Europe. The earliest of these were "frith" or "peace" guilds - groups bonded together for mutual protection following the breakdown of the kins, which were groups related by blood ties.

The world-renowned College of Arms in London awarded the coat of arms of The Guild of Master Craftsmen in 1992, after four years of assessment. Designed by heraldic expert Peter Greenhill to reflect the many categories of Guild membership, it features: three escutcheons (shields) to represent artists, painters and stainers; a pair of compasses opened in chevron for building, construction and carpenters; a dovetail (separating the top third of the shield from the rest) to represent cabinetmaking, woodworking and joinery; and a gavel and chisel for masons and stoneworkers. The southern keep of Lewes Castle, which overlooks the Guild’s headquarters, is featured above the helmet as the crest.

While guilds as such do not exist, many trades continue the apprentice-journeyman-master model. Carpenters, electricians, pipefitters and plumbers are notable examples. Even in academia, the tradition survives, with elementary, middle and high school completing general education; with post secondary degrees awarded in the Associates, Bachelor and Master levels; and PhD students as apprentices, post-docs and associate professors as journeymen and full professors as masters. [1] [2] [3]

The doctoral thesis which needs to be presented in order to get an academic degree, proving the student's proficiency in the chosen subject and whose quality is examined by existing lecturers, is in effect a form of the medieval masterpiece which needed to be prepared by anyone seeking to be accepted as a master in any professional guild.

The terms Master Mariner and harbormaster reflect the fact that the holders of such positions were originally Master craftsman in the Seamen's Guild. Further derived from "harbormaster" is "stationmaster", though guilds no longer existed when railways came into being. 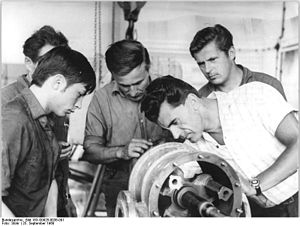 While restricting crafts to privileged guilds has also been abolished in Germany, the ranks of apprentice, journeyman (German: Geselle, literally a person in shared accommodation [German: Saal => hall]) and master craftsman have been retained even through modern times. For many crafts any business in the trade still has to be run by a master craftsman or has to employ at least one Meister to be allowed to run a business of that craft.

Journeymen and masters are by law automatically members of their regional Chamber of the skilled crafts which is a self-governing public body. The Chamber is the organiser of the technical vocational educational training and oversees the examination of the journeymen and masters. The justification for this is the (perceived or actual) higher quality which is achieved by businesses run by master craftsmen. Lately, several crafts have had the requirement for businesses to have a master of the craft removed; however, any craft that is perceived as being security relevant, for instance electricians and chimney sweeps, still has this condition and it is unlikely to be waived in the near future.

The German Meister qualifies the holder to study at a University or Fachhochschule, whether the Meister holds the regular entry qualification (Abitur or Fachhochschulreife) or not.[1] In 2012 the commissions of the states and the central government, also the associated partners, concluded that the "Meisterbrief" is equivalent a bachelor's degree(Deutscher Qualifikationsrahmen, Level 6, Niveau 6).[2][3][4][5]

The Master craftsman is the highest professional qualification in crafts and is a state-approved grade. The education includes theoretical and practical training in the craft and also business and legal training, and includes the qualification to be allowed to train apprentices as well. The status of Master craftsman is regulated in the German Gesetz zur Ordnung des Handwerks, HandwO (Crafts and Trades Regulation Code).

The requirements to become a master craftsman are usually an education in the crafts in which the examination should be taken (a successfully completed apprenticeship and examination, called Gesellenprüfung) and experience of at least 3 to 5 years as a journeyman (Geselle). Only then can training courses for the Meisterprüfung ("Master's examination") be followed. The duration of the courses depends on the craft and can take 4 to 6 years. The examination includes theoretical, practical and oral parts and takes 5 to 7 days (depending on the craft). In some crafts the creation of a masterpiece is also part of the examination.

Master craftsmen who do not run their own business usually have a leading position in a larger commercial enterprises. This is due to the trend that many German-based companies prefer to hire master craftsmen (or Fachhochschule graduates) rather than university graduate as technical managers (mostly mid-level management) as the education is more practical, and because these craftsmen also acquire some theoretical skills and business knowledge during their training. German master craftsmen are in demand across the European Union as a result of the high quality of vocational education in Germany.[citation needed]