Master of the Horse 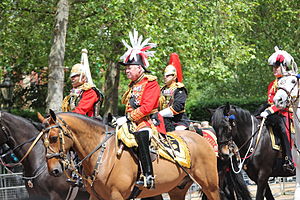 Lord Vestey, Master of the Horse (UK), riding to the Queen's Birthday Parade, 2009

The Master of the Horse was (and in some cases, still is) a position of varying importance in several European nations.

The Magister Equitum was granted a form of imperium, but at the same level as a praetor, and thus was subject to the imperium of the Dictator and was not superior to that of a Consul. In the Dictator’s absence, the Magister Equitum became his representative, and exercised the same powers as the Dictator. It was usually but not always necessary for the man nominated as Magister Equitum to have already held the office of Praetor. Accordingly, the Magister Equitum had the insignia of a praetor: the toga praetexta and an escort of six lictors. The most famous Master of the Horse is Mark Antony, who served during Julius Caesar's first dictatorship.

The title Constable, from the Latin comes stabuli or count of the stables, has a similar history.

Master of the Horse (United Kingdom) 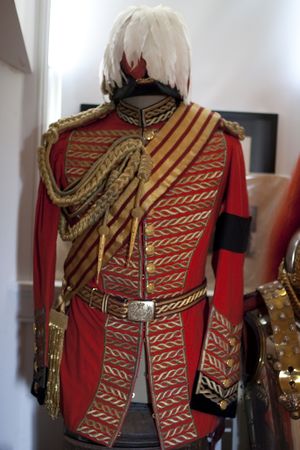 Dress uniform of the Master of the Horse.

The Master of the Horse in the United Kingdom was once an important official of the sovereign's household, though the role is largely ceremonial today. The master of the horse is the third dignitary of the court, and was always a member of the ministry (before 1782 the office was of cabinet rank), a peer and a privy councillor. All matters connected with the horses and formerly also the hounds of the sovereign, as well as the stables and coachhouses, the stud, mews and previously the kennels, are within his jurisdiction. The practical management of the Royal Stables and stud devolves on the chief or Crown Equerry, formerly called the Gentleman of the Horse, whose appointment was always permanent. The Clerk Marshal had the supervision of the accounts of the department before they are submitted to the Board of Green Cloth, and was in waiting on the Sovereign on state occasions only. Exclusive of the Crown Equerry there were seven regular equerries, besides extra and honorary equerries, one of whom was always in attendance on the Sovereign and rode at the side of the royal carriage. They were always officers of the army, and each of them was on duty for about the same time as the lords and grooms in waiting. There are still several pages of honour who are nominally in the master of the horse's department, who must not be confounded with the pages of various kinds who are in the department of the Lord Chamberlain. They are youths aged from twelve to sixteen, selected by the sovereign in person, to attend on him at state ceremonies. At the Coronation they assisted the groom of the stole in carrying the royal train.

The current Master of the Horse is Samuel Vestey, 3rd Baron Vestey.

Today the Master of the Horse has a primarily ceremonial office, and rarely appears except on state occasions, and especially when the Sovereign is mounted. The Crown Equerry has daily oversight of the Royal Mews, which provides vehicular transport for the Sovereign, both cars and horse-drawn carriages. Train travel is arranged by the Royal Travel Office, which also co-ordinates air transport.

The Pages of Honour, who appear only on ceremonial occasions, and the Equerries, were nominally under the authority of the Master of the Horse. The former are now controlled by the Keeper of the Privy Purse. The latter are effectively independent, and are functionally closer to the Private Secretary's Office. There are now three equerries to the Sovereign, and a larger number of extra equerries - usually retired officers with some connection to the Royal Household. The extra equerries are rarely if ever required for duty, but the Equerries are in attendance on the Sovereign on a daily basis. For some years the senior Equerry has also held the position of Deputy Master of the Household. The permanent equerry is an officer of major rank or equivalent, recruited from the three armed services in turn. Many previous equerries have gone on to reach high rank. The temporary equerry is a Captain of the Coldstream Guards, who provides part-time attendance. When not required for duty he has additional regimental or staff duties. Senior members of the Royal Family also have one or two equerries.

In France the master of the horse, known as the Grand Squire of France (Grand Écuyer, or more usually Monsieur le grand) was one of the seven Great Officers of the Crown of France from 1595. As well as the superintendence of the royal stables, he had that of the retinue of the sovereign, also the charge of the funds set aside for the religious functions of the court, coronations, etc. On the death of a sovereign he had the right to all the horses and their equipment in the royal stables. He oversaw personally the "Great Stable" ("grande écurie"). Distinct from this officer and independent of him, was the first equerry (Premier Ecuyer), who had charge of the horses which the sovereign used personally (La petite écurie), and who attended on him when he rode out. The office of master of the horse existed down to the reign of Louis XVI. Under Louis XVIII and Charles X the duties were discharged by the first equerry, but under Napoleon I and Napoleon III the office was revived with much of its old importance.

In Germany the master of the horse (Oberststallmeister) was[when?] a high court dignitary; but his office was merely titular, the superintendence of the Emperor's stables having been carried out by the Oberstallmeister, an official corresponding to the crown equerry in England.

The Caballerizo mayor was the Officer of the Royal Household and Heritage of the Crown of Spain in charge of the trips, the mews and the hunt of the King of Spain.

The Office of “Caballerizo mayor” was one of the main Offices of the Royal Household in charge of the Royal Stables and everything related to the transportation of the Monarch. When the King sorted out from the Royal Palace, the Caballerizo had the main position behind him and the major rang over the other Court Officials. He managed as well the stables, the carriages and the horses. He was assisted by the “Primeros Caballerizos” (First Equerries) who were nominated by him.

He was in charge of the Royal hunt as “Montero mayor” (Great Hunter) holding, in many cases, the “Alcaldias” (Majorships) of the Spanish royal sites.

Papal Master of the Horse

The Master of the Horse, Cavallerizzo Maggiore, or Hereditary Superintendent of the Stables of the Palaces, was a hereditary position held by the Marquess Serlupi Crescenzi. The office was a Participating Privy Chamberlain of the Sword and Cape, in the Pontifical Household. It was abolished in the reforms of the Papal Curia of 1968.

The holder of the title Riksstallmästare (Master of the Horse of the Realm) in Sweden was not one of the Great Officers of The Realm, but rather one of the Lesser Officers of The Realm. He was the superintendent of the Kings Stables and of the realm's stud farms. As such he was important in military matters, and often he had a tight connection with the army, and then especially with the army's cavalry units.

Konyushy (Russian: Конюший) is literally translated as Master of the Horse or Equerry.

Konyushy was a boyar in charge of the stables of Russian rulers. It was a high title at the court of Russian rulers until the 17th century. By the end of the 15th century a special Equerry Office (конюшенный приказ, "konyushenny prikaz") was introduced, headed by the Konyushy. It was in charge of the Tsar's stables, parade equipage, ceremonies of court ride-offs, and military horse breeding. At one point Boris Godunov was konyushy. The Equerry Office handled a significant amount of Tsar's treasures, related to harness and horse/horseman armor, which were transferred to the Kremlin Armoury in 1736.

Koniuszy (Kingdom of Poland and Grand Duchy of Lithuania)

"Koniuszy" (corresponding to the English-language "Equerry" or "Master of the Horse") was a position of nobility known in the Kingdom of Poland from the 11th century, and in the Grand Duchy of Lithuania from the 15th. A koniuszy had charge of the stables and herds of a Grand Duke or King; in reality, it was a podkoniuszy (sub-equerry), subordinate to the koniuszy, who had the more direct responsibility.

From the 14th to 16th centuries, a "koniuszy" was a dignitary (dygnitarz) in the Polish Kingdom and in the Polish-Lithuanian Commonwealth.

In the Kingdom of Georgia, the similar post was known under the name of amilakhvari (amir-akhori, lit.: Prince-Master of the Horse), derived from Arabic. It was a deputy to the commander-in-chief (amir-spasalari) and a member of the royal council. From the 1460s to the Russian annexation of Georgia (1801), the office was hereditary in the Zevdginidze-Amilakhvari family.

Main article: Master of the horse (Kingdom of Hungary)

In the Kingdom of Hungary the master of the horse (Hungarian: főlovászmester) was one of the high officials of the royal household.

Similar posts were common in the imperial courts of China (See Sima as a Chinese surname) and Japan, the royal courts of Korea, and elsewhere in East Asia. The Siamese kingdom of Ayutthaya had a Master of the Royal Elephants.