From Infogalactic: the planetary knowledge core
Jump to: navigation, search
For other uses, see Masterpiece (disambiguation). 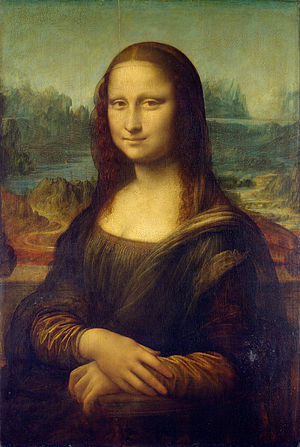 In painting, the Mona Lisa by Leonardo da Vinci, c. 1503–1506, is the archetypal masterpiece, though it was not produced for admission to a guild or academy. 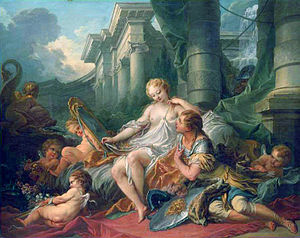 Rinaldo and Armida by François Boucher. A masterpiece produced for admission to the Académie Royale de Peinture et de Sculpture in Paris, 1734.[1]

Masterpiece or chef d'œuvre in modern use refers to a creation that has been given much critical praise, especially one that is considered the greatest work of a person's career or to a work of outstanding creativity, skill, or workmanship. Historically, the word refers to a work of a very high standard produced in order to obtain membership of a Guild or Academy.

The word masterpiece probably derives from the Dutch "meesterstuk" or German "meisterstück", and the form "masterstik" is recorded in English in 1579 (or in Scots, since this was from some Aberdeen guild regulations), whereas "masterpiece" is first found in 1605, already outside a guild context, in a Ben Jonson play.[2] "Masterprize" was another early variant in English.[3]

In English, the term rapidly became used in a variety of contexts for an exceptionally good piece of creative work, and was "in early use, often applied to man as the 'masterpiece' of God or Nature".[4]

In craftsmanship and art

Originally, the term masterpiece referred to a piece of work produced by an apprentice or journeyman aspiring to become a master craftsman in the old European guild system. His fitness to qualify for guild membership was judged partly by the masterpiece, and if he was successful, the piece was retained by the guild. Great care was therefore taken to produce a fine piece in whatever the craft was, whether confectionery, painting, goldsmithing, knifemaking, or many other trades.

In the 17th century, the Worshipful Company of Goldsmiths, for instance, required an apprentice to produce a masterpiece under their supervision at a "workhouse" in Goldsmiths' Hall. The workhouse had been set up as part of a tightening of standards after the company became concerned that the level of skill of goldsmithing was being diluted. The wardens of the company had complained in 1607 that the "true practise of the Art & Mystery of Goldsmithry is not only grown into great decays but also dispersed into many parts, so as now very few workmen are able to finish & perfect a piece of plate singularly with all the garnishings & parts thereof without the help of many & several hands...". The company still require the production of a masterpiece but it is no longer produced under supervision.[5][6]

In Nuremberg, Germany, between 1531 and 1572, apprentices who wished to become a master craftsman were required to produce a columbine cup, a die for a steel seal, and a gold ring set with a precious stone before they could be admitted to the guild. If they failed to be admitted, then they could continue to work for other goldsmiths but not as a master themselves. In some guilds, apprentices were not allowed to marry until they had obtained full membership.[7]

The practice of producing a masterpiece has continued in some modern academies of art, where the general term for such works is now reception piece. The Royal Academy in London uses the term "diploma work" and it has acquired a fine collection of diploma works received as a condition of membership.

In modern English, the word conventionally refers to the best piece of work of a particular creative artist or craftsman[8] but it has come to be used to refer to any work seen to be of high quality, including non-creative works,[9] luxury or rare goods of all kinds,[10] and even mass-produced goods. The word has been adopted as the brand name for a range of watches by Rolex, toys by Transformers, cosmetics by Max Factor and stuffed animals by Steiff.