Matadi is the chief sea port of the Democratic Republic of the Congo and the capital of the Bas-Congo province. It has a population of 245,862 (2004). Matadi is situated on the left bank of the Congo River 148 km (92 mi) from the mouth and 8 km (5.0 mi) below the last navigable point before rapids make the river impassable for a long stretch upriver. It was founded by Sir Henry Morton Stanley in 1879. 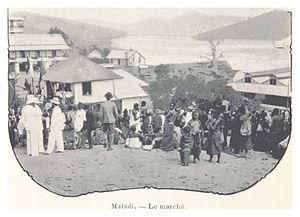 Matadi was founded by Sir Henry Morton Stanley in 1879. It was strategically important because it was the last navigable port on the Congo River and therefore the furthest inland port in the Congo Free State. The construction of the Matadi–Kinshasa Railway (built between 1890 and 1898) made it possible to transport goods from deeper within Congo's interior to the port of Matadi and the city became an important trading center. Portuguese and French West-African commercial interests influenced the city's architecture and urban design which borrowed from the neighboring colonies in Angola and the Congo-Brazzaville.[1]

The word Matadi means stone in the local Kikongo language. The town is built on steep hills and there is local saying that to live in Matadi, you must know the verbs "to go up", "to go down" and "to sweat". Upstream is a series of caves known as the "rock of Diogo Cão", after graffiti carved by the Portuguese explorer in 1485 marking the limit of his travels up the Congo River.

Mount Cambier and the Yelala Rapids also lie near the city. 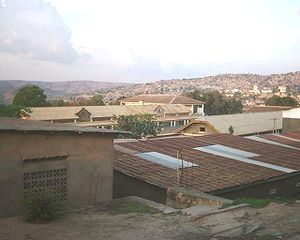 The mouth of the Congo forms one of Africa's largest harbours. In addition to Matadi which is the furthest upriver, three ports are located within it, the others being Boma and Banana in DR Congo and Soyo in Angola. Matadi serves as a major import and export point for the whole nation. Chief exports are coffee and timber. The state fishing company "Pemarza" uses the port to supply fish to Kinshasa. Tshimpi Airport is nearby but is reportedly inactive.[citation needed]

Matadi Bridge, a suspension bridge 722 m long with a main span of 520 m, built in 1983, crosses the river just south of Matadi, carrying the main road linking Kinshasa to the coast. After passing through Matadi and over the bridge, it continues to Boma, Muanda and Banana. Although built as a mixed rail and road bridge, there is no current rail line operating over the bridge. Matadi is though the port railhead for the 366 km long Matadi-Kinshasa Railway constructed to by-pass the rapids on the river upstream. A monument to the builders of the railway stands on a nearby hill.[citation needed]

A power station on the M'pozo River supplies power to Matadi.[citation needed] 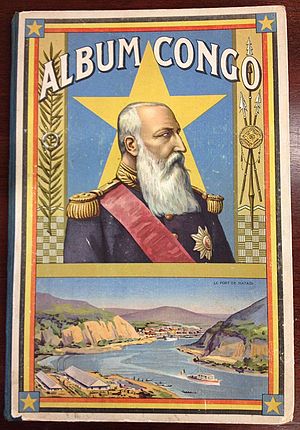 Port of Matadi, on the cover of trading cards from the Congo

The maximum draft of the port is 8.2m.[3] The Navy of the Democratic Republic of the Congo maintains one operational command at the port.