Matthew Neal (born 20 December 1966 in Stourbridge) is a British motor racing driver. He won the British Touring Car Championship in 2005, 2006 and 2011. He is also a race winner in the European Touring Car Championship. He is 6' 6" (2 m) tall, making him almost entirely unable to race single-seaters. He is also the Group Marketing Director at Rimstock Plc, the alloy wheel manufacturer founded by his father Steve.[1]

Neal started out in Motocross but moved into cars in 1988, driving in the Ford Fiesta XR2i category. He was the British Group N Champion in 1990 and 1991, he also co-drove a BMW M3 to victory at the 1990 Willhire 24 Hour race at Snetterton.

Neal made his BTCC debut with Pyramid Motorsport at the Silverstone round of the 1991 BTCC season driving a BMW M3. He finished 13th in his first race before returning to the series two rounds later at Oulton Park with the Auto Trader Techspeed Team in another BMW M3. After that race he would race for the team two rounds later at Donington Park. For 1992 he joined his father's Team Dynamics team driving the BMW M3 which Will Hoy had taken to the championship title the year before until the car was badly damaged forcing Neal to switch to the new BMW 318 for the final race of the season.

He won the Total Cup for drivers without manufacturer support in 1993, before joining Mazda for a season cut short by a huge crash in round five at Silverstone. He rejoined Dynamics for 1995, remaining for several years and he occasionally humbled the big names, as well as winning the Independents' title three further times in 1995, 1999 and 2000. In 1999 he caused a sensation by winning a race at Donington Park in his Nissan, the first Independent to do so in the modern era, winning him a £250,000 prize. He took a further win a year later. The championship's regulations changed for 2001, and Neal briefly joined Peugeot Sport UK before sitting out most of the season to race in the European Touring Car Championship.

After racing in one round of the British Touring Car Championship, Neal switched to the European Touring Car Championship's Super Touring category with RJN Motorsport and their Nissan Primera starting with Round 5 at Magny-Cours. He finished the championship placed 14th in the drivers standings on 266 points, taking one win in the final round in Portugal.

For 2005 the team developed a Honda Integra from its basic road-going form, which was an unusual move as independent teams have historically raced ex-works cars, but the team's efforts were rewarded as Neal eventually took the drivers' title in the last round at Brands Hatch. Dynamics, as Team Halfords also clinched the Teams and Independent Teams Championships. Neal finished every single race in the points, the first driver to do so since the calendar expanded to 30 races per year. 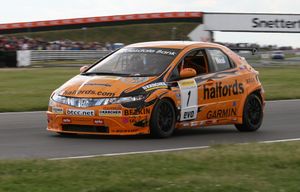 Neal driving the Team Halfords-run Honda Civic at Snetterton in the 2007 BTCC season.

In 2006, Neal drove the No. 1 Honda Integra and captured the championship again with a string of consistent finishes; 4th place in round 28 being enough to clinch his second title. After 2 years without a mechanical failure, Neal had a suspension failure before the start of the final race.

BTC-spec cars such as the Integra were no longer eligible for the main 2007 title, so Dynamics switched to a Honda Civic, using some of their existing running gear but doing development themselves. Neal won the third race of the season, but overall the SEAT and Vauxhall entries were faster, leaving Neal unable to fight for the title. A huge crash in race 1 of the second meeting at Brands Hatch left him briefly hospitalised; the lost points from this saw team-mate Gordon Shedden outpoint him to finish 3rd overall, with Neal 4th. He attracted controversy during the season's final race, in which Fabrizio Giovanardi and Jason Plato fought for the drivers' title. Having signed on as a Vauxhall driver for 2008, Neal let Vauxhall drivers Giovanardi and Tom Chilton through without a fight, but did not do the same for SEAT driver Jason Plato, ensuring Giovanardi would win the title.

In his first year for VX Racing in 2008, he took just one win at Rockingham, while teammate Giovanardi took five wins on the way to retaining his title. Neal finished the year 5th in the standings. After a strong start to 2009, winning the opening race at Brands Hatch, he failed to win again all season, finishing fourth in the standings behind Giovanardi. 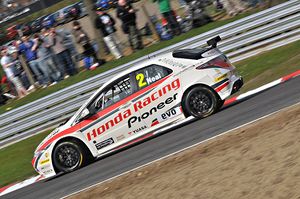 Neal driving for the Honda Racing Team at Brands Hatch in the 2011 BTCC season.

Neal returned to Team Dynamics for the 2010 season, now racing under the Honda Racing banner alongside former team mate Gordon Shedden.[2] Neal lost out in the drivers championship to Jason Plato late in the season but he helped Honda Racing take the Manufacturers and Teams Championships.

Neal stayed with Honda in 2011,[3] with the Honda Civic now using an 2.0 NGTC Honda engine built by Neil Brown Engines.[4] For much of the season the Civics had an advantage over the rest of the field and after a closely fought title battle with his teammate, Neal took his third drivers' title – after 2005 and 2006 – for the Honda Racing team at the final round at Silverstone,[5] this helping his team to secure the Manufacturers and Constructors title.

In 2012, Neal drove the new NGTC Honda Civic. He took the first ever win for an NGTC car in the British Touring Car Championship in the second race of the season at Brands Hatch.[6] Neal won two more races at Oulton Park and with team mate Shedden taking the other win, Honda Yuasa Racing Team became the first team to win all three races in a day since Team Aon won all three races at Silverstone in 2010.[7][8] He finished the season second in the championship behind team–mate Shedden.

Neal stayed with Honda for the 2013 season alongside Shedden.[9] Prior to the Silverstone round Neal broke his finger in a martial arts accident but was passed fitted to race by a doctor[10] He underwent surgery before the season finale at Brands Hatch, Alain Menu tested for the team as a possible substitute for Neal in the event he was unable to race.[11] Neal finished the year 4th in the championship, two places behind teammate Shedden.

He will once again be paired with Shedden for the 2014 season, this time driving the new Honda Civic Tourer. Neal was placed 9th in the overall Standings.

He now lives in Shenstone Nr Kidderminster in Worcestershire.

He has appeared on Top Gear multiple times. He first raced in the Historic People Carrier race in Series 5. He participated in a football match using Toyota Aygos in Series 6 driving for James May's team. He raced a Mitsubishi L300 motorhome in the tenth series during a motorhome race. Neal appeared once again in Series 12's Bus Race, driving an Optare Metrorider. He then appeared in Series 14's airport vehicles race.[12] In Series 20, episode 2 he drove a Mercedes-Benz E-Class in a taxi race. Elsewhere Neal has worked alongside Martin Haven as a co-commentator on Eurosport's coverage of the World Touring Car Championship since 2010.[13]

In March 2015 he drove for Milltek Sport in their diesel Golf in the Mugello 12hr race finishing second in class, a week later driving a 500Hp 1979 Bastos Chevrolet Camaro with David Clark he won the Gerry Marshall Trophy race at Goodwood Members Meeting.

Matt Neal has stated that he keeps fit through training in martial arts, which gives him better aerobic fitness and flexibility. In 2012 Matt achieved the grade of 2nd dan black belt in the British Free Fighting Academy, after training with martial arts instructor Andy Hopwood.[16]