Matthew "Matt" Parry (born 14 January 1994) is a British racing driver who is part of the Caterham F1 driver development programme.[1] 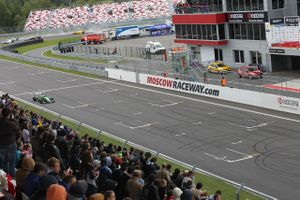 Parry during Race 1 of the 2014 Eurocup Formula Renault 2.0 season at Moscow Raceway.

Born in Cardiff, Parry entered karting in 2006, when he finished second in the Hoddesdon Kart Club Championship Minimax.[2] His biggest success was in the last year of his karting career, winning the Super 1 National Rotax Max Junior championship in 2010.[3]

In 2011 Parry made his début in single-seaters, taking part in the British Formula Ford Championship with Fluid Motorsport.[4] He finished eighth with eighteen point-scoring finishes in 24 races.[5]

For 2012, he decided to switch to the InterSteps championship for Fortec Motorsports. He took thirteen wins and a total of 21 podiums in 23 races on his way to the championship title.[1][6]

Parry continued his collaboration with Fortec for the 2013 Formula Renault 2.0 NEC season.[7] He won five races during the season to take the championship title, taking four further podium finishes.[8] His performances earned him a nomination for the McLaren Autosport BRDC Award for the first time.[9] On 1 December 2013, after the evaluation tests held at Silverstone, Parry was named as the winner of the award, taking the £100,000 cash prize and a Formula One test with McLaren.[10]

In 2015, Parry will make his GP3 debut with Koiranen GP alongside Jimmy Eriksson and Adderly Fong.

* Season still in progress. † As Parry was a guest driver, he was ineligible for points.