Matthew James "Matt" Bellamy (born 9 June 1978) is an English musician, singer, songwriter, multi-instrumentalist, and composer. He is best known as the lead vocalist, guitarist, pianist, and principal songwriter of rock band Muse. As a performer, he is often recognized for his eccentric stage persona, wide tenor vocal range, and piano and guitar playing abilities.[1][2]

Matt Bellamy's father, George Bellamy, was rhythm guitarist in the 1960s pop group The Tornados, who were the first British band to have a United States number one song, with "Telstar".[3] "Knights of Cydonia", a single from Muse's fourth album Black Holes and Revelations, is often cited as a tribute to that song, with its space rock sound and accompanying video depicting a cowboy's quest through an alien landscape. Bellamy's mother, Marilyn, was born in Belfast, and moved to England in the 1970s. On her first day in England she met George, who was at the time working as a taxi driver in London. They later moved to Cambridge where Matthew's older brother Paul was born, followed a couple of years later by Matthew. In the mid-1980s, the family moved to Teignmouth, Devon. After the divorce of Bellamy's parents, he lived with his mother and brother. Bellamy started playing the piano at the age of 6 and guitar when he was 11. His first musical performance was in June 1991, aged 12, playing piano in front of his school at Teignmouth Community College.[4] 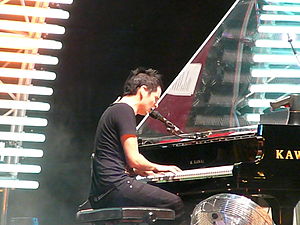 Muse's origins can be traced to Teignmouth, Devon at Teignmouth Community School, where Bellamy had been in a number of bands previously including Carnage Mayhem and Gothic Plague with drummer Dominic Howard. When members of Gothic Plague left because of other interests, Bellamy and Howard asked Wolstenholme to join. In 1994, using the name Rocket Baby Dolls, they won the school's "Battle of the Bands" which led them to take the band more seriously. They decided to change their name to a more "professional" one, and Muse was born. The band consisted (and still consists) of Matt Bellamy, Chris Wolstenholme (bass guitar and backing vocals) and Dominic Howard (percussion). Muse struggled to establish itself during their early years, but have since gone on to enjoy worldwide success. Muse blend alternative, art rock, experimental rock, progressive rock, classical music, electronica and many more. The band are also well known for their energetic and visually dazzling live performances.[5] On 16–17 June 2007, Muse became the first band to sell out the newly built Wembley Stadium in London.[6] 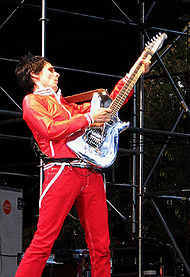 On 26 September 2008, the University of Plymouth awarded the members of Muse an honorary doctorate degree in arts for their work in the field of music.[10]

In the January 2010 edition of Total Guitar, Bellamy was named "Guitarist of the Decade" and was proclaimed to be "the Hendrix of his generation".[11] In the Guinness Book of World Records 2010, Bellamy is credited as holding the world record for most guitars smashed on a tour. His record, 140, was set during the Absolution Tour. In April 2010, Bellamy was named the eighth best front man of all time by the readers of Q.[12] In December 2010, readers of MusicRadar voted Bellamy the 9th Greatest Lead Singer of all time.[13] In 2010, BBC Radio 6 conducted a survey where Matt Bellamy came third as the best guitarist of the last 30 years.[14]

In September 2009, Bellamy has mentioned the extensive use of Dickinson amplifiers on their album The Resistance.[15] Bellamy owns many Manson guitars, of which all were built by Hugh Manson except the Mirror Kaoss, Doubleneck, Keytar and Matt Black II which were built by Tim Stark. All of the guitars built for Bellamy, aside from the 7 String E Guitar, have a shape that he designed with Hugh Manson several years ago, dubbed Mattocaster. The Mattocaster shape resulted from Bellamy wanting a guitar with "the body of a Fender Telecaster and the sound of a Gibson Les Paul".[16] Bellamy is also famed for his use of the Zvex Fuzz Factory, which he uses to achieve his signature feedback squeals, most famously heard on the introduction of "Plug in Baby". He has said that the core of his tone is a Vox AC30.

Many of his songs display revolutionary views as well as a dislike of political corruption. "Assassin" and "Uprising" are two notable songs with obvious revolutionary sentiments. In an interview with Q Magazine, Bellamy stated that he is a "left-leaning libertarian".[17][18] In 2006 Bellamy said that he believed the 9/11 attacks were an "inside job".[19] However, in 2009 he told Rolling Stone that he did not believe this: "There is loads of stuff on the Internet suggesting 9/11 was an inside job. But that is not my belief."[20]

On 17 September 2009 Bellamy discussed being politically influenced by reading Confessions of an Economic Hitman by John Perkins. He explains the book helped inspire the song "Uprising" and expressed his views that he feels lobbyists have undue influence on politicians as well as the political system. He states that "when people become powerful they often have a disregard for public opinion."[21]

Bellamy also co-wrote the end credits for the 2009 film The International. He wrote the song "Soaked", which appears on Adam Lambert's debut album, For Your Entertainment. Bellamy appears as a playable character in the video game Guitar Hero 5, along with the song "Plug in Baby".[22] In April 2014, Bellamy was announced as a featured contributor on New Zealand Artist Kimbra's 2nd album, The Golden Echo, he, Brigham Taylor, Joe Roth, Douglas Wick, Lucy Fisher, Florence Welch, Sarah Ferguson (The Duchess of York), Jennifer Davisson Killoran and Patrick McCormick are producing Jon Favreau's 2016 Disney remake The Jungle Book.[23][full citation needed]

For 9 years, Bellamy was engaged to an Italian psychologist named Gaia Polloni (separated 2009). He began dating American actress Kate Hudson in spring 2010.[24] Bellamy and Hudson became engaged in April 2011.[25] Their son together, Bingham Hawn "Bing" Bellamy,[26] was born in July 2011 in Los Angeles.[27] In December 2014, it was announced that Bellamy and Hudson had separated.[28] Since February 2015, Bellamy has been dating model and actress Elle Evans, who also starred in the music video for "Mercy", off the band's latest album Drones.[29]