Modine, the youngest of seven[1] children, was born in Loma Linda, California, the son of Dolores (née Warner), a bookkeeper, and Mark Alexander Modine, who managed drive-in theaters. He is a nephew of a stage actress Nola Modine Fairbanks, and his great-grandfather was prospector and pioneer Ralph Jacobus Fairbanks.[2][3] He lived in Utah for several years, moving every year or two. The drive-in theaters his father managed were being torn down because the land beneath them exceeded the value of the theaters. The Modines moved to Imperial Beach, California where Matthew attended Junior and High School. After graduation Matthew moved to New York City to pursue art and theatre.

Modine's first film role was in John Sayles' Baby It's You. His performance caught the eye of director Harold Becker, who cast him in Vision Quest based on the novel by Terry Davis. He appeared in the sex comedy Private School, co-starring Phoebe Cates and Betsy Russell. The director Robert Altman propelled Modine to international stardom with his film adaptation of David Rabe's play Streamers. Modine and his fellow castmates won an unprecedented Best Actor prize from the Venice Film Festival for the tragic story of young American soldiers about to be shipped to Vietnam. Modine played Mel Gibson's brother in Mrs. Soffel and starred with Nicolas Cage in Alan Parker's Birdy. The film was awarded Gran Prix at the Cannes Film Festival. The actor also famously turned down the role of LT Pete "Maverick" Mitchell (the role that Tom Cruise made famous) because he felt the film's pro-military stance went against his politics.[4] 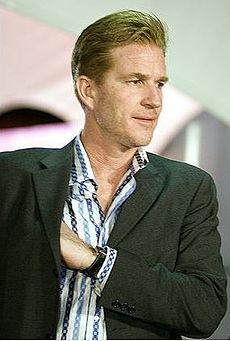 Modine may be best known for his role as Private Joker, the central character of Stanley Kubrick's 1987 war movie Full Metal Jacket. Subsequently, he played the dangerous young criminal Treat in Alan Pakula's film version of the Lyle Kessler stageplay Orphans. Modine played the goofy, earnest FBI agent Mike Downey in Jonathan Demme's screwball comedy Married to the Mob opposite Michelle Pfeiffer. In 1990 he led the cast of Memphis Belle, a fictionalized account of the famous B-17 Flying Fortress. Modine has twice been nominated for an Emmy Award. First for his performance in And the Band Played On (an HBO Emmy award winning movie about the early years of the HIV/AIDS epidemic) and the dark comedy What the Deaf Man Heard.

In 1995, he appeared opposite Geena Davis in the romantic action-adventure film Cutthroat Island. Modine made his feature directorial debut with If... Dog... Rabbit, which came after the success of three short films debuting at the Sundance Film Festival: When I Was a Boy (co-directed with Todd Field), Smoking written by David Sedaris, and Ecce Pirate written by Modine. The dark comedy, I Think I Thought debuted at the Tribeca Film Festival. The film tells the story of a Thinker (Modine) who ends up in Thinkers Anonymous. Other short films include, To Kill an American, Cowboy, and The Love Film. In 2011, he completed Jesus Was a Commie, an avant garde-dialectical conversation about the world and the prominent issues of modern society. Modine co-directed the short film with Terence Ziegler, the editor of I Think I Thought. Modine's short films have played internationally.[5]

In 2003, he guest starred on The West Wing in the episode "The Long Goodbye". He portrayed the character Marco, who went to high school with C.J. Cregg (Allison Janney), and who helped her deal with her father's steady mental decline due to Alzheimer's disease. Modine agreed to the role because he is a longtime friend of Janney. (The two appeared in a theatrical production of the play Breaking Up directed by Stuart Ross). That same year, he played Fritz Gerlich in the CBS miniseries Hitler: The Rise of Evil.

In 2004, Modine appeared in Funky Monkey as ex-football star turned spy Alec McCall, who teams up with super-chimp Clemens and his friend Michael Dean (Seth Adkins) to take down the villainous Flick (Taylor Negron). The film was critically panned, yet has gained a cult status.[6]

In 2005, Abel Ferrara's Mary won the Special Jury Prize at the Venice Film Festival. In the film, Modine portrayed a director recounting the story of Mary Magdalene (Juliette Binoche). The following year, he guest-starred in the Law and Order: Special Victims Unit episode "Rage" as a serial killer of young girls.

In 2010, Modine appeared in The Trial, which was awarded the Parents Television Council's Seal of Approval™. The PTC said: "'The Trial' combines the best features of courtroom drama, murder mystery and character story. 'The Trial' is a powerful drama which shows the power of healing and hope."

In 2010, Modine appeared in HBO's Too Big to Fail, a film about the Wall Street financial crisis. Modine stars as John Thain, former Chairman and CEO of Merrill Lynch, who famously spent millions decorating his office.

In February 2013, Modine was cast in the Ralph Bakshi animated film Last Days of Coney Island after coming across the film's Kickstarter campaign online.[8][9]

In 2014 he co-starred with Olivia Williams, Richard Dillane and Steve Oram in the horror mystery film Altar.[10]

Modine appeared in Arthur Miller's Finishing the Picture at Chicago's Goodman Theatre, and Miller's Resurrection Blues at London's Old Vic. He played Atticus Finch in To Kill a Mockingbird at Connecticut's Hartford Stage. This production became the most successful play in the theatre's 45-year history.[11] In 2010, he starred with Abigail Breslin in the 50th Anniversary Broadway revival of the The Miracle Worker[12] at the Circle in the Square theatre.

Cycling has been Modine's main mode of transportation since moving to New York City from Utah in 1980. He heads a pro-bike organization called Bicycle for a Day and was honored for his work on June 2, 2009 by the environmental arts and education center on the East River, Solar 1.[4]

Modine is married with two children and lives in West Chelsea, Manhattan.[4] He was friends with Natasha Richardson before her death.[4]