Matthews is a large suburban town of Charlotte located in southeastern Mecklenburg County, North Carolina. The population was 27,198 according to the 2010 Census.

The town was named for an early settler.[3]

According to the United States Census Bureau, the town has a total area of 17.2 square miles (45 km2), all of it land. 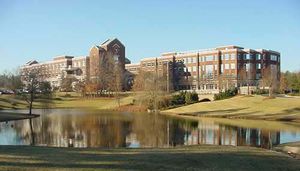 There were 7,904 households out of which 36.1% had children under the age of 18 living with them, 63.4% were Married/couples living together, 7.8% had a female householder with no husband present, and 25.5% were non-families. 22.4% of all households were made up of individuals and 8.2% had someone living alone who was 65 years of age or older. The average household size was 2.61 and the average family size was 3.08.

Matthews is served by a branch of the Charlotte Mecklenburg Library.[6] The library is located on the first floor of the Matthews Town Hall and is one of the most active in the system.

One Fortune 500 company, Family Dollar Stores, has its headquarters in Matthews.[7]

Other companies having their headquarters in Matthews include:

Matthews is twinned with: