Matthias I, Duke of Lorraine 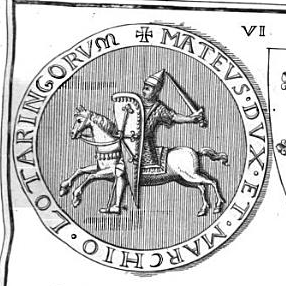 Matthias I (1119 – 13 May 1176) was the duke of Lorraine from 1138 to his death as the eldest son and successor of Simon I and Adelaide. Like his forefathers going back to Thierry II and even to Adalbert, he was a stern supporter of the king of Germany and Holy Roman Emperor. He married Judith (sometimes called Bertha), daughter of Frederick II, Duke of Swabia, and therefore niece of the Hohenstaufen king Conrad III and sister of Frederick Barbarossa, future emperor.

He accompanied Barbarossa on a number of important occasions, including his imperial coronation by Pope Adrian IV in Rome, 1155. He assisted the emperor in his wars against Adrian and his successor Alexander III and the kings of France and Sicily. He extended his own ducal demesne at the expense of the bishop of Toul, but was an important donor to the Church and founder of abbeys. He died in 1176 and was interred in his abbey of Clairlieu in Villers-lès-Nancy. By his Hohenstaufen marriage (1138), he had: