Maud de Lacy had a personality that was described as "highly competitive and somewhat embittered".[1] She became known as one of the most litigious women in the 13th century[1] as she was involved in numerous litigations and lawsuits with her tenants, neighbours, and relatives, including her own son. Author Linda Elizabeth Mitchell, in her Portraits of Medieval Women: Family, Marriage, and Politics in England 1225-1350', states that Maud's life has received "considerable attention by historians".[2]

Maud was styled Countess of Hertford and Countess of Gloucester upon her marriage to Richard de Clare. Although her mother, Margaret de Quincy, was suo jure Countess of Lincoln, this title never passed to Maud as her mother's heir was Henry de Lacy, the son of Maud's deceased younger brother Edmund de Lacy, Baron of Pontefract.[3]

Her eldest son was Gilbert de Clare, 6th Earl of Hertford, 7th Earl of Gloucester, a powerful noble during the reigns of kings Henry III of England and Edward I.

Maud had a younger brother Edmund de Lacy, Baron of Pontefract who married in 1247 Alasia of Saluzzo, by whom he had three children.

Maud and her mother, Margaret, were never close; in point of fact, relations between the two women were described as strained.[3] Throughout Maud's marriage, the only interactions between Maud and her mother were quarrels regarding finances, pertaining to the substantial Marshal family property Margaret owned and controlled due to the latter's second marriage on 6 January 1242 to Walter Marshal, 5th Earl of Pembroke almost two years after the death of Maud's father, John de Lacy in 1240.[5] Despite their poor rapport with one another, Maud was, nevertheless, strongly influenced by her mother.[2]

The fact that her mother preferred her grandson, Henry over Maud did not help their relationship; Henry, who was also her mother's ward, was made her heir, and he later succeeded to the earldom of Lincoln.[3]

Marriage to the Earl of Gloucester

On 25 January 1238 which was her fifteenth birthday, Maud married Richard de Clare, 5th Earl of Hertford, and 6th Earl of Gloucester, son of Gilbert de Clare, 4th Earl of Hertford, 5th Earl of Gloucester, and Isabel Marshal. Maud was his second wife; his first marriage, which was made clandestinely, to Megotta de Burgh, ended in an annulment.[6] Even before the annulment of the Earl's marriage to Megotta, Maud's parents paid King Henry III the enormous sum of 5,000 pounds to obtain[7] his agreement to the marriage. The King supplied her dowry which consisted of the castle of Usk, the manor of Clere, as well as other lands and manors.[7]

Throughout her marriage, Maud's position as the wife of the most politically significant nobleman of the 13th century was diminished by her mother's control of a third of the Marshal inheritance and her rank as Countess of Lincoln and dowager countess of Pembroke.[8]

Richard being the heir to one-fifth of the Pembroke earldom was also the guarantor of his mother-in-law's dowry.[5]

In about 1249/50, Maud ostensibly agreed to the transfer of the manor of Naseby in Northamptonshire, which had formed the greatest part of her maritagium [marriage portion], to her husband's young niece Isabella and her husband, William de Forz, 4th Earl of Albemarle as part of Isabella's own maritagium.[7] Years later, after the deaths of both women's husbands, Maud sued Isabella for the property, claiming that it had been transferred against her will. Isabella, however, was able to produce the chirograph that showed Maud's participation in the writing of the document; this according to the Common Law signified Maud's agreement to the transaction, and Maud herself was "amerced for litigating a false claim".[7]

Together Richard and Maud had seven children:[9] 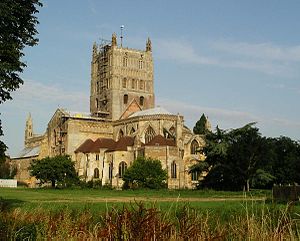 Tewkesbury Abbey, where Maud designed and commissioned a splendid tomb for her husband Richard de Clare, 6th Earl of Gloucester

On 15 July 1262, her husband died near Canterbury. Maud designed and commissioned a magnificent tomb for him at Tewkesbury Abbey where he was buried. She also donated the manor of Sydinghowe to the "Priory of Leigh" (i.e. Canonsleigh Abbey, Devon, for the soul of Richard, formerly her husband, Earl of Gloucester and Hertford by charter dated to 1280.[9] Their eldest son Gilbert succeeded Richard as the 6th Earl of Hertford and 7th Earl of Gloucester. Although Maud carefully arranged the marriages of her daughters, the King owned her sons' marriage rights.[1]

She was involved in numerous lawsuits and litigations with her tenants, neighbours, and relatives, including her eldest son Gilbert, who sued her for admeasurement of her dowry.[7] In her 27 years of widowhood, Maud brought 33 suits into the central courts; and she herself was sued a total of 44 times.[1] As a result, she was known as one of the most litigious women in the 13th century.[1] She endowed many religious houses, including the Benedictine Stoke-by-Clare Priory, Suffolk (re-established in 1124 by Richard de Clare, 1st Earl of Hertford having been moved from Clare Castle) and Canonsleigh Abbey, Devon, which she re-founded as a nunnery.[10] She also vigorously promoted the clerical career of her son, Bovo, and did much to encourage his ambitions and acquisitiveness. She was largely responsible for many of the benefices that were bestowed on him, which made him the richest churchman of the period.[11] Although not an heiress, Maud herself was most likely the wealthiest widow in 13th century England.[1]