Maurice Denis (November 25, 1870 – November 13, 1943)[1] was a French painter and writer, and a member of the Symbolist and Les Nabis movements.[2] His theories contributed to the foundations of cubism, fauvism, and abstract art.

Maurice Denis was born November 25, 1870, in Granville, Manche, a coastal town in the Normandy region of France. Waters and coastlines would remain favorite subject matter throughout his career, as would material drawn from the Bible. For such an avant-garde figure, Denis had a surprisingly broad religious streak, writing in his notebook at age fifteen, "Yes, it's necessary that I am a Christian painter, that I celebrate all the miracles of Christianity, I feel it's necessary."[3] The Denis family was affluent, and young Maurice attended both the École des Beaux-Arts and the Académie Julian, where he studied with the French figure painter and theorist Jules Joseph Lefebvre. 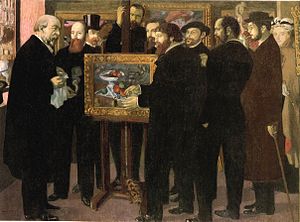 At the Académie, he met painters and future Nabi members including Paul Sérusier, Pierre Bonnard; through Bonnard he also met the future Nabis Édouard Vuillard, Ker-Xavier Roussel and Hermann-Paul. In 1890, they formed The Nabis. They chose "Nabi"—Hebrew for "Prophet"—because they understood they would be creating new forms of expression. The group would split apart by the end of the decade, and would influence the later work of both Bonnard and Vuillard, as well as non-Nabi painters like Henri Matisse.

After Les Nabis, Denis went on to focus on religious subjects and murals. In 1922, he published his collected historical and theoretical work as "Nouvelles théories sur l’art moderne, sur l’art sacré"—that is, "New Theories of Modern and Sacred Art." 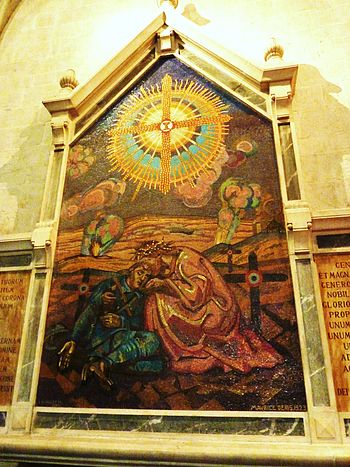 The subjects of his mature works include landscapes and figure studies, particularly of mother and child. But his primary interest remained the painting of religious subjects, like "The dignity of labour", commissioned in 1931 by the International Federation of Christian Trade Unions to decorate the main staircase of the Centre William Rappard. 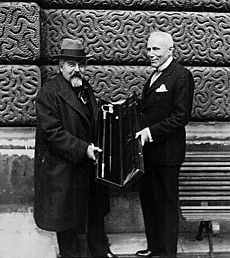 Denis was among the first artists to insist on the flatness of the picture plane—one of the great starting points for modernism, as practiced in the visual arts.

In his famous proposal for the definition of painting, offered in 1890, he stated: "Remember that a picture, before being a battle horse, a nude, an anecdote or whatnot, is essentially a flat surface covered with colors assembled in a certain order."

In 1898, he produced a theory of creation that found the source for art in the character of the painter: "That which creates a work of art is the power and the will of the artist."

The Ateliers d'Art Sacré were founded on 5 November 1919 after World War I (1914-18) by Denis and Georges Desvallières as part of a broad movement in Europe to reconcile the church with modern civilization.[4] The Ataliers created art for churches, particularly those devastated by the recent war. Denis said that he was against academic art because it sacrificed emotion to convention and artifice, and was against realism because it was prose and he wanted music. Above all he wanted beauty, which was an attribute of divinity.[5]

Denis, a Catholic tertiary, married his first wife, Marthe Meurier, in 1893. They had seven children, and she would pose for numerous Denis works. Following her death in 1919, Denis painted a chapel dedicated to her memory. Two years later, he married again, to Elisabeth Graterolle, and fathered two more children. Politically, he was close to the monarchist Action Française movement.

Denis died in Paris of injuries resulting from an automobile accident in November 1943. (The date of his death is variously listed as the 2nd, 3rd, or 13th.)

In 1980, the Maurice Denis Museum was opened in the artist's home in the Parisian suburb of Saint-Germain-en-Laye.

A major retrospective was mounted at the Musée Des Beaux Arts de Montréal in 2007; it was the first major Denis show in North America.[6]

A similar exhibition took place in 1995 at the UK's Walker Art Gallery in Liverpool.