Maurice Pascal Alers Hankey, 1st Baron Hankey GCB, GCMG, GCVO, PC, FRS[1] (1 April 1877 – 26 January 1963) was a British civil servant who gained prominence as the first Cabinet Secretary and who later made the rare transition from the civil service to ministerial office. He is best known as the highly efficient top aide to Prime Minister David Lloyd George and the War Cabinet that directed Britain in the First World War. As Naylor evaluates his career, he held to the "certainties of a late Victorian imperialist, whose policies sought to maintain British domination abroad and to avoid as far as possible British entanglement within Europe. His patriotism stands inviolable, but his sensitivity to processes of historical change proved limited." Naylor finds that "Hankey did not altogether grasp the virulence of fascism...except as a military threat to Britain; nor did he ever quite comprehend the changing face of domestic politics which Labour's emergence as a party of government entailed... In these shortcomings Hankey was typical of his generation and background; that his responsibility was greater lay in the fact that he was better informed than nearly any of his contemporaries."[2][3]

The third son of R. A. Hankey, Maurice Hankey was born at Biarritz in 1877 and educated at Rugby School. He joined the Royal Marine Artillery, was promoted captain and served in successive roles including as coastal defence analyst in the War Division of the Naval Intelligence Department (1902–1906).[4] In 1908 he was appointed Naval Assistant Secretary to the Committee of Imperial Defence and became Secretary to the Committee in 1912, a position he would hold for the next twenty-six years. In November 1914 he took on the additional duty of Secretary of the War Council. In this function he took notice of the ideas of Major Ernest Swinton to build a tracked armoured vehicle and brought them to the attention of Winston Churchill on 25 December 1914, leading to the eventual creation of the Landship Committee.

In December 1916 David Lloyd George became Prime Minister and shook up the way the government was run. A small War Cabinet was instigated and Hankey was appointed as its Secretary. He also served as Secretary of the Imperial War Cabinet (which also incorporated representatives of the Colonies and Dominion governments) and gained a reputation for strong competency, so much so that when the full Cabinet was restored in 1919, the secretariat was retained and Hankey served as Secretary to the Cabinet for the next nineteen years. In 1923 he acquired the further position of Clerk of the Privy Council. During his long tenure he would also often serve as British Secretary to many international conferences and Secretary-General of many Imperial Conferences. 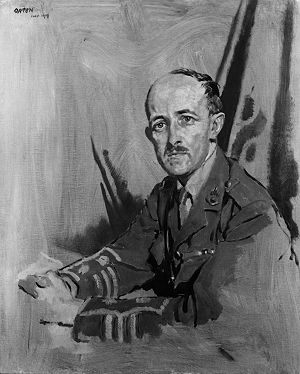 Painting of Hankey in military uniform by William Orpen, 1919

In August 1938 Hankey retired from government and became a British Government Director of the Suez Canal Company, a post he would hold for only one year. In the New Year Honours of 1939 he was ennobled as Baron Hankey, of The Chart in the County of Surrey. Lord Hankey remained a respected figure and was often consulted by ministers and civil servants for advice. In August 1939 he advised Neville Chamberlain about the formation of a new War Cabinet and the following month become another of Chamberlain's many non-party political appointments when he was made Minister without Portfolio and a member of the War Cabinet. Hankey was personally reluctant to take on this task but agreed to do so. He became Chancellor of the Duchy of Lancaster when Chamberlain was succeeded by Winston Churchill in May 1940, but was left out of Churchill's War Cabinet. In July 1941 Lord Hankey was moved to the position of Paymaster-General, but the following year he was dropped from the Government altogether. He continued to hold other positions in both the public and private sector until his death. After World War II, Hankey emerged as a leading critic of war crimes trials, and in his 1950 book Politics, Trials and Errors argued that the Allies had no right to convict German and Japanese leaders of war crimes.

Hankey kept a series of at times startlingly detailed handwritten diaries throughout most of his years in government, including during his time as Secretary to the War Council and Imperial War Cabinet of the First World War. These diaries are currently held at the Churchill Archives Centre in Cambridge UK, and can be read by the public.

Maurice Hankey's youngest brother Donald Hankey was a soldier best known for a series of essays he wrote while serving on the western front in World War I. Donald died in action at the Somme.