Mauritz Stiller (17 July 1883 – 18 November 1928) was a Finnish-Swedish film director, best known for discovering Greta Garbo and bringing her to America.

Stiller had been a pioneer of the Swedish film industry, writing and directing many short films from 1912. When MGM invited him to Hollywood as a director, he arrived with his new discovery Greta Gustafsson, whose screen name Greta Garbo is believed to have been his suggestion.

After frequent disagreements with studio executives at MGM and Paramount, Stiller returned to Sweden, where he died soon afterwards.

Born Moshe Stiller in Helsinki, his family was of Ashkenazi Jewish heritage, having lived in Russia and Poland before settling in Finland. When he was four, his mother committed suicide, after which he was raised by family friends. From early on, Stiller was interested in acting. His talents did not go unnoticed, and soon Stiller was offered the opportunity to practice and display his acting skills in the theaters of Helsinki and Turku in Finland.

Drafted into the army of Czar Nicholas II—Finland was at the time an autonomous Grand Duchy of Russia—rather than report for duty he fled the country for exile, and settled in Sweden. He became a Swedish citizen in 1921.

By 1912, Stiller had become involved with Sweden's rapidly developing silent film industry. He began by writing scripts, in addition to acting and directing in short films but within a few years gave up on acting to devote his time to writing and directing. He was soon directing feature-length productions and his 1918 effort Thomas Graals bästa barn (Thomas Graal's First Child), starring Karin Molander, and with Victor Sjöström in the leading role, received much acclaim.

By 1920, having directed more than thirty-five films including Sir Arne's Treasure and Erotikon, Stiller was a leading figure in Swedish filmmaking. He also directed The Blizzard starring a young Einar Hanson and based on the Selma Lagerlof novel Gunnar Hedes saga. 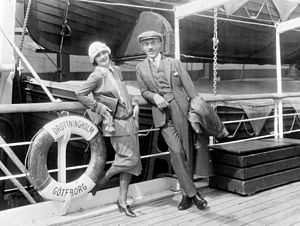 At the Royal Dramatic Theatre in Stockholm, he met a young actress named Greta Gustafsson whom he cast in an important but secondary role in his film, Gösta Berlings saga (The Atonement of Gosta Berling), and who some have said gave her the stage name Greta Garbo. For Stiller, the screen presence of the eighteen-year-old actress led to him bringing her and Hanson to the United States after he accepted an offer from Louis B. Mayer to direct for Metro-Goldwyn-Mayer.

In Hollywood, Mauritz Stiller was assigned to direct The Temptress (1926), Garbo's second film with MGM, but he could not deal with the studio structure. After repeated arguments with MGM executives, he was replaced on the film by Fred Niblo and his contract with the studio terminated. Stiller was immediately hired by Paramount Pictures, where he made three successful films but was let go a second time while directing his fourth as a result of his continuing disagreements with studio bosses.

Mauritz Stiller returned to Sweden in 1927 and died the following year from pleurisy at the age of forty-five. He was interred in the Norra begravningsplatsen in Stockholm.

Stiller's contribution to the motion picture industry has since been recognized with a star on the Hollywood Walk of Fame at 1713 Vine Street. In Kristianstad, a monument was erected in his honor. Originally, his star on the Walk of Fame was erroneously listed as "Maurice Diller" and wasn't corrected until the late 1980s.