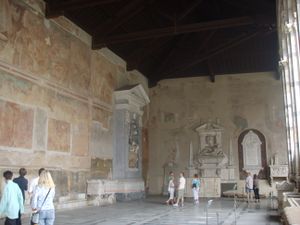 Algarotti thumbstone, designed by Tesi, on the left in neo-classical style

Mauro Antonio Tesi (January 15, 1730 – July 18, 1766), or, as he is sometimes called, after the name given him by his patron and admirer, Francesco Algarotti, "Il Maurino", was an Italian painter of the late-Baroque period, active mainly in Bologna. He is also considered an early proponent of the Neo-classical style.

He was born in Montalbano near Modena.[1] He was largely self-taught and worked as both a decorative [2] and an architectural painter in churches and both public and private buildings in Bologna, Pistoia and Florence.[3] He travelled with and illustrated the works of his compagnon Algarotti and designed the funeral monument on the Campo Santo in Pisa.[4] One of his pupils was Valentino Baldi. He died in Bologna two years after Algarotti, it is said also by tuberculosis.[citation needed]

Two of his paintings can be seen in the Residenzschloss Ludwigsburg.