Maximillian Michael "Max" Brooks (born May 22, 1972) is an American horror author and screenwriter. He is the son of comedy filmmaker Mel Brooks and late actress Anne Bancroft. Brooks's writing focuses on zombie stories.[1] Brooks is also a television and voice-over actor.

Brooks is dyslexic and attended Crossroads School in Santa Monica, California. He studied history at Pitzer College in Claremont, California but dropped out. He spent a semester at the University of the Virgin Islands. He graduated from American University in Washington, D.C. in 1994.[3][4][5]

In 2006, Brooks followed with World War Z: An Oral History of the Zombie War, which deals with the war between the human race and zombies. Paramount Pictures acquired the movie rights with Brad Pitt's production company Plan B Entertainment producing the film. In the October 2006 issue of Fangoria Magazine, Brooks stated that he would not be writing the screenplay for the motion picture, as he felt he was not an accomplished enough screenwriter to "do it right" (J. Michael Straczynski wrote the first version of the screenplay).[6]

In 2013, Cemetery Dance published a new limited Edition of World War Z. Jeremy Caniglia created all new artwork for this special release to coincide with the film release.

Brooks wrote the introduction for the hardcover collected edition of Dynamite Entertainment's zombie miniseries Raise the Dead released in 2007.[7] 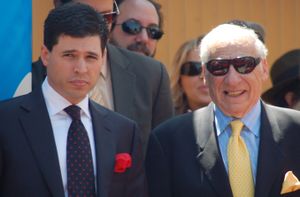 In 2011, Brooks wrote the foreword for Everything You Ever Wanted to Know About Zombies, a 300-page fiction book written by Matt Mogk.

In 2012 he published "Closure, Limited" featuring the story of that name from The New Dead along with three other short stories set in the World War Z universe.[9]

In 2013, Avatar Press released The Extinction Parade, a comic book series based on the 2011 short story created by Brooks.

In 2014, Broadway Books published The Harlem Hellfighters, a graphic novel which portrays a fictionalized account of the entirely African American 369th Infantry Regiment's experiences in World War I, with writing done by Brooks and illustrations by Caanan White.[10] Sony Pictures has purchased the rights to create a film version of the novel, with Caleeb Pinkett and James Lassiter producing on behalf of Overbrook Entertainment.[11]

Brooks has a number of other creative credits. As an actor, he has been seen in Roseanne, To Be or Not to Be, Pacific Blue, and 7th Heaven. He also has a career voicing animation; his voice has been featured in the animated shows Batman Beyond, Buzz Lightyear of Star Command, Justice League and All Dogs Go to Heaven: The Series. During the start of the 3rd season of Lost Tapes, he was cast as himself in the zombie episode, telling the audience about how zombies come to be. He also appeared on Spike TV series Deadliest Warrior, in which he represented the zombie team in the "Vampires vs Zombies" episode, as one of the Zombie experts along with Matt Mogk the Founder of the Zombie Research Society.[12] He also appeared on the Discovery Channel"s Sons of Guns in a zombie gun build off ("Civilian vs. Military").

Brooks has been married to Michelle Kholos since 2003. They have one son, Henry Michael Brooks (born March 2005). They live in Venice, California.[3]