Carl Adolf "Max" von Sydow (/vɒn ˈsiːdoʊ/;[1] Swedish: [fɔn ˈsyːdɔv]; born 10 April 1929) is a Swedish-born French actor.[2] He has starred in many films and had supporting roles in dozens more in many languages, including Swedish, Norwegian, English, Italian, German, Danish, French and Spanish. He received the Royal Foundation of Sweden's Cultural Award in 1954, was made a Commandeur des Arts et des Lettres in 2005, and was named a Chevalier de la Légion d'honneur on 17 October 2012.

Von Sydow has appeared in well over 100 films and TV shows.[3] Some of his most memorable film roles include Knight Antonius Block in Ingmar Bergman's The Seventh Seal (1957), the first of his eleven films with Bergman, and the film that includes the iconic scenes in which he plays chess with Death;[4] Martin in Through a Glass Darkly (1961); Jesus in The Greatest Story Ever Told (1965); Oktober in The Quiller Memorandum (1966); Karl Oskar Nilsson in The Emigrants (1971); Roy Lindberg in The Apple War (1971); Father Lankester Merrin in The Exorcist (1973); Joubert the assassin in Three Days of the Condor (1975); Ming the Merciless in Flash Gordon (1980); the villain Ernst Stavro Blofeld in the James Bond film Never Say Never Again (1983); Liet-Kynes in Dune (1984); Frederick in Hannah and Her Sisters (1986); Lassefar in Pelle the Conqueror (1987), for which he received his first Academy Award nomination; Dr. Peter Ingham in Awakenings (1990); Lamar Burgess in Minority Report (2002); Sir Walter Loxley in Robin Hood (2010), and The Renter in Extremely Loud and Incredibly Close (2012), which earned him his second Academy Award nomination. In 2016, Sydow will join the cast of HBO's hit series Game of Thrones, playing the role of the Three-eyed Raven.

Max von Sydow was born Carl Adolf von Sydow in Lund, to a wealthy family. His father, Carl Wilhelm von Sydow (21 December 1879 – 4 March 1952), was an ethnologist and professor of Irish, Scandinavian, and comparative folklore at the University of Lund.[5] Some of his ancestry is German; his family’s origin is in Pomerania, now a region mostly in Poland, formerly part of Prussia, and "Sydow" is a Prussian family name. The particle "von" means "of" and usually indicates aristocratic descent. His mother, Baroness Maria Margareta "Greta" Rappe (8 December 1892 – 25 July 1984), was a schoolteacher.[6][7][8] Sydow was brought up as a Lutheran and later became an agnostic.[9]

He attended Lund Cathedral School, where he learned German and English, starting at the age of nine. At school he and some friends founded an amateur theatrical company. He completed his national service before studying at the Royal Dramatic Theatre ("Dramaten") in Stockholm, where he trained between 1948 and 1951 with the likes of Lars Ekborg, Margaretha Krook and Ingrid Thulin. During his time at Dramaten, he made his screen debuts in Alf Sjöberg's films Only a Mother (Bara en mor, 1949) and Miss Julie (Fröken Julie, 1951), a screen version of Strindberg's scathing drama.

In 1955, Sydow moved to Malmö, where he met his mentor, Ingmar Bergman. His first work with Bergman occurred on stage at the Malmö Municipal Theatre, and he would go on to work with Bergman on films such as The Seventh Seal (Det sjunde inseglet, 1957), Wild Strawberries (Smultronstället, 1957) and The Virgin Spring (Jungfrukällan, 1960). In The Seventh Seal, Sydow is the knight who plays a chess game with Death. The chess scenes and the film were international breakthroughs for actor and director alike. It was in these films that Sydow honed and perfected his craft.

Max von Sydow came to dominate the screen as he did the stage, becoming an idol of the international arthouse film scene. Critical recognition came as early as 1954 when he was awarded the Royal Foundation Culture Award. He worked profusely on both stage and screen while in Scandinavia, resisting the increasing calls from the United States to go to Hollywood. After being seen in Bergman's Academy Award–winning films and having been first choice for the title role of Dr. No, von Sydow finally went to America after agreeing to star in the film which led to much greater recognition, in the role of Jesus in George Stevens' all-star epic The Greatest Story Ever Told (1965). As his talents were soon in demand in other American productions, von Sydow and his family relocated for some time to Los Angeles. From 1965, he became a regular on the American screen while maintaining a presence in his native Sweden. In 1969, he appeared in John Huston's The Kremlin Letter, and in 1971 gave a powerful, quiet performance in Jan Troell's acclaimed The Emigrants alongside actress Liv Ullmann. Though often typecast as a villain, he was rewarded in the United States with two Golden Globe nominations, for Hawaii in 1966 and The Exorcist in 1973. 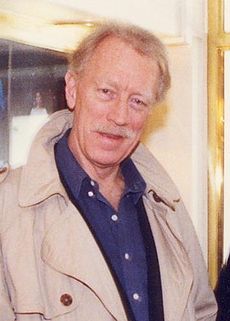 Two hundred years to the day since King Gustav III, who founded Dramaten, was assassinated, von Sydow attended a meeting there on 16 March 1992 commemorating the date.

In the mid-1970s, Sydow moved to Rome and began to appear in a number of Italian films, becoming friendly with another screen legend, Marcello Mastroianni. In the U.S., he played a memorably professional Alsatian assassin in Three Days of the Condor (1975), a role which won him the KCFCC Award for Best Supporting Actor. 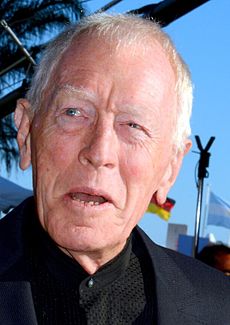 Sydow has since won the Australian Film Institute's Best Actor Award for his title role in Father (1989), the Guldbagge Best Director Award for his only directorial foray, Katinka (Ved vejen, 1988), based on a novel by Herman Bang, and the Best Actor Award at the Tokyo International Film Festival for The Silent Touch (Dotknięcie ręki, 1993). He received international acclaim for his performance as Nobel Prize–winning novelist Knut Hamsun in Jan Troell's biopic Hamsun. He received his third Swedish Guldbagge and his second Danish Bodil for his depiction of a character often described as his King Lear. In 1996, he starred in Liv Ullmann's Private Confessions (Enskilda samtal). Back in Hollywood, he appeared in What Dreams May Come (1998).

He was acclaimed for his role as an elderly lawyer in Scott Hicks' Snow Falling on Cedars. In 2002, Sydow had one of his largest commercial successes, co-starring with Tom Cruise in Steven Spielberg's science fiction thriller Minority Report. In 2003, he played mentor character Eyvind in the European TV adaptation of the Ring of the Nibelung saga. The show set ratings records and was released in the US as Dark Kingdom: The Dragon King. In 2007, Sydow starred in the box-office hit Rush Hour 3. He followed that with Julian Schnabel's foreign film The Diving Bell and the Butterfly, based on the memoir by Jean-Dominique Bauby.

Max von Sydow appeared in Showtime's drama series The Tudors, in which he portrayed Otto, Cardinal Truchsess von Waldburg, a German-born clergyman who tries to organize the defeat of King Henry VIII. He also appeared in Martin Scorsese's 2010 film adaptation of Shutter Island and Ridley Scott's 2010 adaption of Robin Hood, playing Robin's blind stepfather, a touching Sir Walter Loxley (who gets a nice joke about being 'tumescent' at 84).[11]

Sydow voices the character of Esbern in The Elder Scrolls V: Skyrim, which was released on 11 November 2011. He narrated the initial teaser trailer for the game.[12][13]

In April 2013, Max von Sydow was honored at the Turner Classic Movie (TCM) Festival in Hollywood, with screenings of two of his classic films, Three Days of the Condor and The Seventh Seal.[14]

In March 2014, Sydow guest-starred in the animated sitcom The Simpsons, and in 2015 he had a supporting role in the sequel Star Wars: The Force Awakens.[15] In 2016, he is scheduled to join the HBO series Game of Thrones in Season 6 as the Three-eyed Raven.[16]

On 1 August 1951, Max von Sydow married actress Christina Inga Britta Olin (born 1926 – died 1998); the couple had two sons, Clas and Henrik, who appeared with him in the film Hawaii, playing his son at different ages. He and Olin divorced on 26 February 1979.

He married secondly the French filmmaker Catherine Brelet on 30 April 1997 in Provence. In 2002 he became a citizen of France, for which purpose he had to give up his Swedish citizenship.[17]