From Infogalactic: the planetary knowledge core
Jump to: navigation, search
This article is about the American painter and illustrator. For the British fashion label, see Maxfield Parrish (clothing).

Maxfield Parrish (July 25, 1870 – March 30, 1966) was an American painter and illustrator active in the first half of the 20th century. He is known for his distinctive saturated hues and idealized neo-classical imagery.

Born in Philadelphia, Pennsylvania, he was the son of painter and etcher Stephen Parrish. He began drawing for his own amusement as a child. His given name was Frederick Parrish, but he later adopted the maiden name of his paternal grandmother, Maxfield, as his middle name, and later as his professional name. His father was an engraver and landscape artist, and young Parrish's parents encouraged his talent.

He attended the Haverford School, Haverford College, and the Pennsylvania Academy of the Fine Arts, and later at Drexel Institute of Art, Science & Industry. But he was also exposed to the landscapes, art, and architecture of Europe in his youth. During a stay in Europe with his parents during 1894-96, Parrish studied at the Paris school of a Dr. Kornemann, and in the summer of 1895 he traveled to London and Brussels. During 1901-02, he journeyed through parts of the American Southwest, said to have influenced his sense of the color possibilities of natural landscapes (he visited Colorado again in 1920). In 1903 he traveled to Italy to study the scenery and architecture as research for a commission, and while in Europe he once again visited Paris.

Parrish entered into an artistic career that lasted for more than half a century, and which helped shape the Golden Age of illustration and the future of American visual arts. 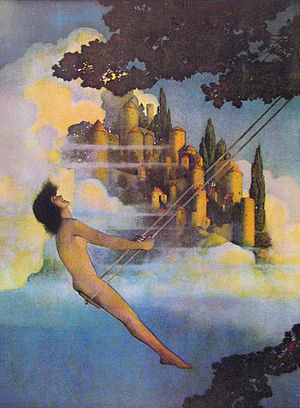 The Dinky Bird, by Maxfield Parrish, an illustration from Poems of Childhood by Eugene Field, 1904. This work exemplifies Parrish's characteristic use of androgynous figures.

He lived in Philadelphia until he was 28, at which time he purchased land in Plainfield, New Hampshire, opposite the valley from his parents' home. Over a number of years he designed and built his own home and eventual studio, The Oaks. He spent the rest of his life there with his wife, Lydia, who died in 1953, and his mistress and model, Sue Lewin, who survived his death in 1966 at age 95.

Launched by a commission to illustrate L. Frank Baum's Mother Goose in Prose in 1897, his repertoire included many prestigious projects, among which were Eugene Field's Poems of Childhood in 1904 (8 color plates; see illustration) and such traditional works as Arabian Nights in 1909 (12 color plates). Books illustrated by Parrish, in addition to those that include reproductions of Parrish's work—including A Wonder Book and Tanglewood Tales in 1910 (10 color plates), The Golden Treasury of Songs and Lyrics in 1911 ( 8 color plates) and The Knave of Hearts in 1925 (with 23 color images)—are highly sought-after collectors' items. 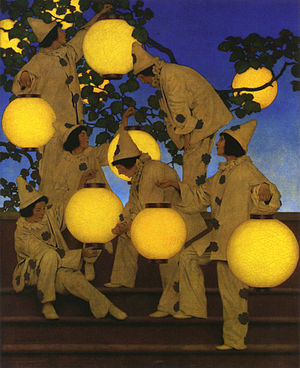 The Lantern Bearers, 1908, oil on canvas on board, created for Collier's magazine, the painting shows Parrish's use of glazes and saturated color in an evocative night scene, Crystal Bridges Museum of American Art

He had numerous commissions from popular magazines in the 1910s and 1920s, including Hearst's, Colliers, and Life. He was also a favorite of advertisers, including Wanamaker's, Edison-Mazda Lamps, Fisk Tires, Colgate and Oneida Cutlery. In the 1920s, Parrish turned away from illustration and concentrated on painting for its own sake. Androgynous nudes in fantastical settings were a recurring theme. He continued in this vein for several years, living comfortably off the royalties brought in by the production of posters and calendars featuring his works. An early favorite model was Kitty Owen in the 1920s. Later another favorite, Susan Lewin, posed for many works, and was employed in the Parrish household for many years. Parrish posed for many images that featured male—and occasionally female—figures (see Potpourri, 1905).

In 1931, he declared to the Associated Press, "I'm done with girls on rocks", and opted instead to focus on landscapes. Though never as popular as his earlier works, he profited from them. He would often build models of the landscapes he wished to paint, using various lighting setups before deciding on a preferred view, which he would photograph as a basis for the painting (see for example, The Millpond). He lived in Plainfield, New Hampshire, near the Cornish Art Colony, and painted until he was 91 years old. He was also an avid machinist. He often referred to himself as "a mechanic who loved to paint."[1]:34

Parrish was one of the most successful and prolific of the illustrators and painters of the Golden Age of Illustration. He was earning over $100,000 per year by 1910, at a time when a fine home could be purchased for $2,000. Norman Rockwell referred to Parrish as "my idol". Parrish, although unique in his execution and never duplicated, exhibited considerable influence upon other illustrators and artists, an influence which continues through the present. His original paintings are highly sought-after when they come to market, as well as his first-edition prints, which continue to command high prices at both auction and through private sales. His exacting attention to detail preceded the Photorealist and Hyper-Realist art movements, and his abundant imagination and love of fantasy elements have also influenced artists in myriad media.

Parrish's art features dazzlingly luminous colors; the color Parrish blue was named in acknowledgement.[2] He achieved the results by means of a technique called glazing where bright layers of oil color separated by varnish are applied alternately over a base rendering (Parrish usually used a blue and white monochromatic underpainting).

He would build up the depth in his paintings by photographing, enlarging, projecting and tracing half- or full-size objects or figures. Parrish then cut out and placed the images on his canvas, covering them with thick, but clear, layers of glaze. The result is realism of elegiac vivacity. His work achieves a unique three-dimensional appearance, which does not translate well to coffee table books. 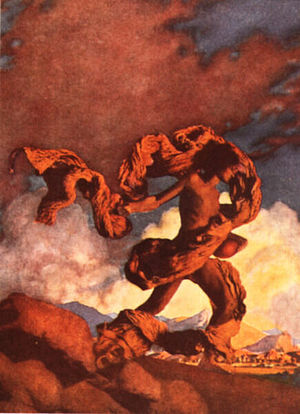 A fantastical Parrish illustration titled Cadmus Sowing the Dragon's Teeth, which appeared in Collier's in 1908 and A Wonder Book and Tanglewood Tales, by Nathaniel Hawthorne

The outer proportions and internal divisions of Parrish's compositions were carefully calculated in accordance with geometric principles such as root rectangles and the golden ratio. In this Parrish was influenced by Jay Hambidge's theory of Dynamic Symmetry.[3]

Parrish devised many innovative techniques. A technique which Parrish used frequently involved creating a large piece of cloth with a geometric pattern in stark black-and-white (such as alternate black and white squares, or a regular pattern of black circles on a white background). A human model (often Parrish himself) would then pose for a photograph with this cloth draped naturally on his or her body in a manner which intentionally distorted the pattern. Parrish would develop a transparency of the photo, then project this onto the canvas of his current work in progress. Using black graphite on the white canvas, Parrish would painstakingly trace and fill in all the black portions of the projected photo. The result was astonishing: in the finished painting, a human figure would be seen wearing a distinctive geometrically patterned cloth that draped realistically and accurately. 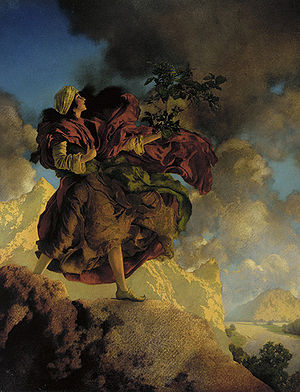 Parrish's work defies categorization since he was part of no traditional movement or school, and developed an original and individual style. However, his work has been highly influential, and the prices for his original paintings at auction have increased. His magnum opus, Daybreak, sold in 2006 for US$7.6 million.[4]

The Elton John album Caribou has a Parrish background. The Moody Blues album The Present uses a variation of the Parrish painting Daybreak for its cover. In 1984, Dali's Car, the British New Wave project of Peter Murphy and Mick Karn, used Daybreak as the cover art of their only album, The Waking Hour. The Irish musician Enya has been inspired by the works of Parrish. The cover art of her 1995 album The Memory of Trees is based on his painting The Young King of the Black Isles.[5] A number of her music videos include Parrish imagery including Caribbean Blue. In the 1995 music video "You Are Not Alone", Michael Jackson and his then wife Lisa Marie Presley appear semi-nude in emulation of Daybreak. The Italian singer-songwriter Angelo Branduardi's fourth album La pulce d'acqua of 1977 featured nine inlay full colour print reproduction of painter it works; one of them is clearly inspired by Parrish's Stars.

The cover of the 1985 Bloom County cartoon collection Penguin Dreams and Stranger Things comprises elements of Daybreak, The Garden of Allah, and The Lute Players.

The poster for The Princess Bride was inspired by his painting titled "Daybreak".

His second son, Maxfield Parrish, Jr., is known for his important contribution to the development of the first self-developing camera at Dr. Edwin H. Land's Polaroid Corporation. He also collaborated with his cousin, inventor John Haven Emerson, in an important patent lawsuit involving iron lungs.

Maxfield Parrish's third son, Stephen Parrish II, worked for Pan American as a mechanic. His daughter, Jean Parrish, was a noted artist in her own right. She died in 2004.