Maximus the Confessor (Greek: Μάξιμος ὁ Ὁμολογητής) also known as Maximus the Theologian and Maximus of Constantinople (c. 580 – 13 August 662) was a Christian monk, theologian, and scholar.

In his early life, Maximus was a civil servant, and an aide to the Byzantine Emperor Heraclius. However, he gave up this life in the political sphere to enter into the monastic life. Maximus had studied diverse schools of philosophy, and certainly what was common for his time, the Platonic dialogues, the works of Aristotle, and numerous later Platonic commentators on Aristotle and Plato, like Plotinus, Porphyry, Iamblichus, and Proclus. When one of his friends began espousing the Christological position known as Monothelitism, Maximus was drawn into the controversy, in which he supported an interpretation of the Chalcedonian formula on the basis of which it was asserted that Jesus had both a human and a divine will. Maximus is venerated in both Eastern Christianity and Western Christianity. He was eventually persecuted for his Christological positions; following a trial, his tongue and right hand were mutilated. He was then exiled and died on August 13, 662 in Tsageri, Georgia. However, his theology was upheld by the Third Council of Constantinople and he was venerated as a saint soon after his death. He is almost unique among saints in that he has two feast days: the 13th of August and the 21st of January. His title of Confessor means that he suffered for the Christian faith, but was not directly martyred. The Life of the Virgin its only extant copy is in a Georgian translation, commonly is, albeit mistakenly, attributed to him, and is considered to be one of the earliest complete biographies of Mary, the mother of Jesus.

Very little is known about the details of Maximus' life prior to his involvement in the theological and political conflicts of the Monothelite controversy.[2] Numerous Maximian scholars call substantial portions of the Maronite biography into question, including Maximus' birth in Palestine, which was a common seventh century trope to discredit an opponent. Moreover, the exceptional education Maximus evidently received could not have been had in any other part of the Byzantine Empire during that time except for Constantinople, and possibly Caesarea and Alexandria. It is also very unlikely that anyone of low social birth, as the Maronite biography describes Maximus, could have ascended by the age of thirty to be the Protoasecretis of the Emperor Heraclius, one of the most powerful positions in the Empire. It is more likely that Maximus was born of an aristocratic family and received an unparalleled education in philosophy, mathematics, astronomy, etc. It is true, however, that Maximus did not study rhetoric as he himself notes in the prologue to his Earlier Ambigua to John,[3] to which his lack of high stylistic by Byzantine standards attests. Nevertheless, for reasons not explained in the few autobiographical details to be gleaned from his texts, Maximus left public life and took monastic vows at the monastery of Philippicus in Chrysopolis, a city across the Bosporus from Constantinople (later known as Scutari, the modern Turkish city of Üsküdar). Maximus was elevated to the position of abbot of the monastery.[4] "Theology without practice is the theology of demons". (One of his most famous quotes)

When the Persians conquered Anatolia, Maximus was forced to flee to a monastery near Carthage. It was there that he came under the tutelage of Saint Sophronius, and began studying in detail with him the Christological writings of Gregory of Nazianzus and Dionysius the Areopagite. Maximus continued his career as a theological and spiritual writer while his lengthy stay in Carthage.[5] Maximus was also held in very high esteem by the exarch Gregory, the eparch George[6] and the population as a holy man, ostensibly becoming an influential unofficial political advisor and spiritual head in North Africa.

While Maximus was in Carthage, a controversy broke out regarding how to understand the interaction between the human and divine natures within the person of Jesus. This Christological debate was the latest development in disagreements that began following the First Council of Nicaea in 325, and were intensified following the Council of Chalcedon in 451. The Monothelite position was developed as a compromise between the dyophysitists and the miaphysists, who believed dyophysitism is conceptually indistinguishable from Nestorianism. The Monothelites adhered to the Chalcedonian definition of the hypostatic union: that two natures, one divine and one human, were united in the person of Christ. However, they went on to say that Christ had only a divine will and no human will (Monothelite is derived from the Greek for "one will"), which led some to charge them with Apollinarian monophysitism. 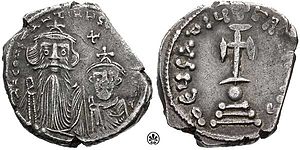 A silver hexagramma showing Constans II with his son. Constans II supported Monothelitism, and had Maximus exiled for his refusal to agree to Monothelite teachings.

The Monothelite position was promulgated by Patriarch Sergius I of Constantinople and by Maximus' friend and successor as the Abbot of Chrysopolis, Pyrrhus.[7] Following the death of Sergius in 638, Pyrrhus succeeded him as Patriarch, but was shortly deposed due to political circumstances. During Pyrrhus' exile from Constantinople, Maximus and the deposed Patriarch held a public debate on the issue of Monothelitism. In the debate, which was held in the presence of many North African bishops, Maximus took the position that Jesus possessed both a human and a divine will. The result of the debate was that Pyrrhus admitted the error of the Monothelite position, and Maximus accompanied him to Rome in 645.[8] However, on the death of Emperor Heraclius and the ascension of Emperor Constans II, Pyrrhus returned to Constantinople and recanted of his acceptance of the Dyothelite ("two wills") position.

Maximus may have remained in Rome, because he was present when the newly elected Pope Martin I convened the Lateran Council of 649 at the Lateran Basilica in Rome.[9] The 105 bishops present condemned Monothelitism in the official acts of the synod, which some believe may have been written by Maximus.[10] It was in Rome that Pope Martin and Maximus were arrested in 653 under orders from Constans II, who supported the Monothelite doctrine. Pope Martin was condemned without a trial, and died before he could be sent to the Imperial Capital.[11]

In 662, Maximus was placed on trial once more, and was once more convicted of heresy. Following the trial Maximus was tortured, having his tongue cut out, so he could no longer speak his rebellion, and his right hand cut off, so that he could no longer write letters.[12] Maximus was then exiled to the Lazica or Colchis region of modern-day Georgia and was cast in the fortress of Schemarum, perhaps Muris-Tsikhe near the modern town of Tsageri.[13] He died soon thereafter, on 13 August 662.[14] The events of the trials of Maximus were recorded by Anastasius Bibliothecarius. 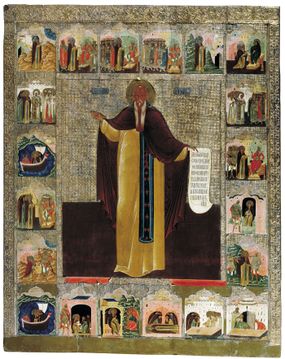 Maximus the Confessor and His Miracles. An early 17th-century Stroganov school icon from Solvychegodsk.

Along with Pope Martin I, Maximus was vindicated by the Third Council of Constantinople (the Sixth Ecumenical Council, 680–681), which declared that Christ possessed both a human and a divine will. With this declaration Monothelitism became heresy, and Maximus was posthumously declared innocent of all charges against him.

Maximus is among those Christians who were venerated as saints shortly after their deaths. The vindication of Maximus' theological position made him extremely popular within a generation after his death, and his cause was aided by the accounts of miracles at his tomb.[15] In the Roman Catholic Church the veneration of Maximus began prior to the foundation of the Congregation for the Causes of Saints.

Maximus is one of the last men to be recognized by both the Orthodox and Catholic Churches as a Father of the Church.

As a student of Pseudo-Dionysius, Maximus was one of many Christian theologians who preserved and interpreted the earlier Neo-Platonic philosophy, including the thought of such figures as Plotinus and Proclus. Maximus' work on Pseudo-Dionysius the Areopagite was continued by John Scotus Erigena at the request of Charles the Bald.[16]

The Platonic influence on Maximus' thought can be seen most clearly in his theological anthropology. Here, Maximus adopted the Platonic model of exitus-reditus (exit and return), teaching that humanity was made in the image of God, and the purpose of salvation is to restore us to unity with God.[17] This emphasis on divinization or theosis helped secure Maximus' place in Eastern theology, as these concepts have always held an important place in Eastern Christianity.[18]

Christologically Maximus insisted on a strict dyophysitism, which can be seen as a corollary of the emphasis on theosis. In terms of salvation, humanity is intended to be fully united with God. This is possible for Maximus because God was first fully united with humanity in the incarnation.[16] If Christ did not become fully human (if, for example, he only had a divine and not a human will), then salvation was no longer possible, as humanity could not become fully divine.[19] Furthermore, in his works Maximus the Confessor argued the unconditionality of the divine incarnation.[20]

Regarding salvation, Maximus has been described as a proponent of apocatastasis or universal reconciliation, the idea that all rational souls will eventually be redeemed, like Origen and St. Gregory of Nyssa.[21] While this claim has been disputed,[22] others have argued that Maximus shared this belief in universal reconciliation with his most spiritually mature students.[23]

Maximus' work was translated by the 9th-century, Irish philosopher and mystical theologian Johannes Scotus Eriugena. In Eastern Christianity, Maximus has always been influential. The Eastern theologians Symeon the New Theologian and Gregory Palamas are seen as intellectual heirs to Maximus. Further, a number of Maximus' works are included in the Greek Philokalia, a collection of some of the most influential Orthodox Christian writers.