From Infogalactic: the planetary knowledge core
Jump to: navigation, search
This article is about May Queens. For the South Korean television drama series, see May Queen (TV series).

The May Queen or Queen of May is a personification of the May Day holiday, and of Springtime and also Summer. 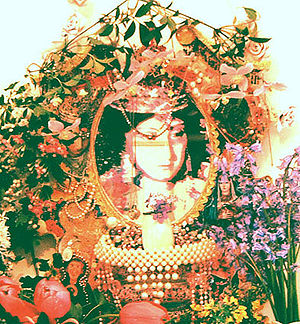 May Altar in Ireland, - Religious imagery of Mary as Queen of May, work of artist Clare O Hagan 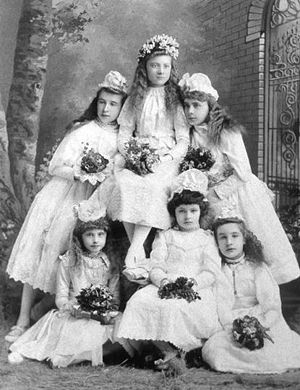 A May Queen of New Westminster, British Columbia, Canada circa 1877.

Today the May Queen is a girl who must ride or walk at the front of a parade for May Day celebrations. She wears a white gown to symbolise purity and usually a tiara or crown. Her duty is to begin the May Day celebrations. She is generally crowned by flowers and makes a speech before the dancing begins. Certain age groups dance round a Maypole celebrating youth and the spring time.

Sir James George Frazer found in the figure of the May Queen, a relic of tree worship:[1]

According to folklore, the tradition once had a sinister twist, in that the May Queen was put to death once the festivities were over.[citation needed] The veracity of this belief is difficult to establish; it may just be a folk memory of ancient pagan customs. Still, frequent associations between May Day rituals, the occult and human sacrifice are still to be found in popular culture today. The Wicker Man, a cult horror film starring Christopher Lee, is a prominent example of these associations.

In the High Middle Ages in England the May Queen was also known as the "Summer Queen". George C. Homans points out: "The time from Hocktide, after Easter Week, to Lammas (August 1) was summer (estas)."[2]

Modern English: On the 30th day of May was a jolly May-game in Fenchurch Street (London) with drums and guns and pikes, The Nine Worthies did ride; and they all had speeches, and the morris dance and sultan and an elephant with a castle and the sultan and young moors with shields and arrows, and the lord and lady of the May".[3] 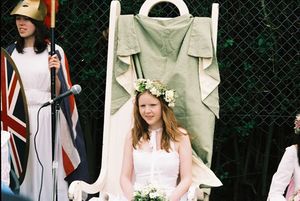 The 2005 May Queen of Brentham, England, Eleanor Teasdale, on her throne.

Many areas keep this tradition alive today. The oldest unbroken tradition is Hayfield, Derbyshire[4] based on a much older May Fair. Another notable event includes the one in the Brentham Garden Suburb, England which hosts it annually.[5] It has the second oldest unbroken tradition although the May Queen of All London Festival at Hayes Common in Bromley is a close contender. A May Day festival is held on the village green at Aldborough, North Yorkshire on a site that dates back to Roman times and the settlement of Isurium Brigantum. A May queen is selected from a group of 13 upward girls by the young dancers. She returns the next year to crown the new May Queen and stays in the procession. The largest event in this tradition in modern Britain is the Beltane Fire Festival in Edinburgh, Scotland.

Cultural references to the May Queen