This article is about the tradition at the University of Cambridge. For the celebratory week in Argentina, see May Revolution. 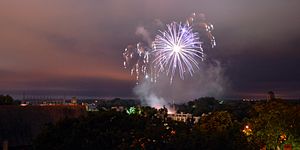 Fireworks of the St John's College May Ball 2014 viewed from Castle Mound. 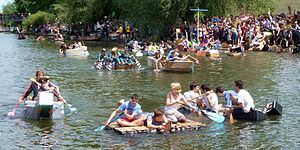 Some participants of the cardboard boat race on Suicide Sunday 2012.

May Week is the name used within the University of Cambridge to refer to a period at the end of the academic year. Originally May Week took place in the week during May before year-end exams began.[1] Nowadays, May Week takes place in June after exams, and is a cause for great celebration amongst the students of the University. Highlights of the week include Bumps races, May Balls, June Events and garden parties.

Originally May Week festivities were held in May, in the final week leading up to the year end exams, but in 1882 the May boat races (known as the May Bumps) were moved to June and the rest of the activities followed suit.[2]

Suicide Sunday is the name used at Cambridge University to refer to the Sunday immediately after the end of the summer term (known as Easter Term). By this Sunday, all students have finished exams but most of the results have not been published, so it is traditionally a period of nerves and suspense. The name, however, ironically refers to the celebration that students haven't committed suicide due to stress of exams.[citation needed] The event is for current students of the University of Cambridge but is frequented by former students that indulge in the student lifestyle.