Maya Karin Roelcke (born 29 October 1979) better known by her stage name Maya Karin, is a Malaysian film actress, television host, and singer. Now one of the leading and established actresses in Malaysia's film industry, she garnered wide recognition from the critics and public for her award winning and memorable performances in movies such as Pontianak Harum Sundal Malam and Ombak Rindu. In the history of Malaysia Film Festival, the nation's foremost film award ceremony, Maya hold the record for an actress with most nominations (7) in the category of Best Actress Award and one of only six actresses to have won the award twice. She is also the first of only two Malaysian actresses to have won the prestigious Best Actress Award at the Asia Pacific Film Festival. Being one of very few local actresses to be nominated in the popular and best acting category award for almost every year, Maya is titled for an impressive number of award and nomination in Festival Filem Malaysia, Anugerah Skrin, Anugerah Majlis Pengkritik Filem Kuala Lumpur, Anugerah Lawak Warna, Asia Pacific Film Festival, Estepona Fantasy and Terror Film Festival and Anugerah Bintang Popular Berita Harian.

Maya was born in Bayreuth, Germany. Her father, Gottfried Roelcke, is German. Her mother, Che Zan, is from Penang, Malaysia, and is of Malay, Chinese and Indian parentage.[1] She is the oldest of three siblings. Her brother is Armin, and her sister is Irina. Growing up in Indonesia until the age of 17, she started modelling and theatre acting in her teens. She later graduated from Limkokwing University of Creative Technology, Kuala Lumpur Malaysia in Media and Marketing before starting her career in the Malaysian Entertainment Industry.

In 2000, she was cast as a television show host for Malaysia's TV3 lifestyle entertainment programme Wavelength, which began her mainstream career and exposure. She began to receive film offers within a year and was soon cast in her first film role as one of the leads in Aziz M. Osman's Sri Dewi Malam. With role of a wife in comma, Maya couldn't prove much of her acting ability through the limited screen time in the film and eventually criticized for an unimpressive performance. In the same year, she played a girl living in a rural village in her second movie No Problem. Her significant figure in the local entertainment industry (hosting, acting and magazine cover girl) then led her to win the New Popular Artist Award at Malaysia's Anugerah Bintang Popular Berita Harian (Popular Star Awards) and the Anugerah Media Hiburan (Media Entertainment Awards) in 2001. In 2003 she was cast in a supporting role in a hit movie, Mr. Cinderella 2 opposite established actors Yusry (KRU) and Erra Fazira and began to show a promising talent and career in acting.

In mid 2004, Maya was cast by the award winning film director Shuhaimi Baba in the lead role in Pesona Pictures' Pontianak Harum Sundal Malam and established her position as one of the leading Malaysian and regional talents. The film was both critically and commercially successful. Maya's outstanding and dramatic turns as a primadona (Meriam), a naive girl (Maria) and a banshee (Pontianak) in the film led her to gain international recognition including the Best Actress Award at the 49th Asia Pacific Film Festival 2004 (Fukuoka, Japan). Maya Karin is the first of only two Malaysian Actress to win such award at the festival. In 2005, Maya reprised her role as the lead in the sequel Pontianak Harum Sundal Malam II and continued to receive critical acclaims by winning the award of Best Actor (male/female) at the Estepona Fantasy and Terror Film Festival 2005 (Malaga, Spain). Following the mass critical and commercial success of these two films and so her performance, Maya won the coveted Most Popular Actress (Film) Award at the Anugerah Bintang Popular Berita Harian (Popular Star Awards) 2005.

Despite her growing feature film career, Maya continued her involvement in television, and in 2004 she was invited by Channel [V] International to join their VJ team. In 2006, she was voted Best VJ in Star Buzz Editor's Choice Awards 2006. Other shows that she has hosted are the bridal programme 'Ratu Sehari' (Queen for a Day) in 2004 for Malaysia's ASTRO Ria channel and the travelogue programme 'Beauty Secrets From The East' in 2005 for Malaysia's local TV3 channel.

In 2007, Maya played a variety of lead roles in Pesona Pictures' Waris Jari Hantu and 1957: Hati Malaya and Tayangan Unggul's Anak Halal and continued to receive nominations in various award functions. Maya won Best Actress Awards in Malaysia Film Festival and Anugerah Oskar Malaysia in 2008 for her genuine portrayal as a tomboy girl in Anak Halal.

Years after she involved in drama centric films, Maya then showed her versatility as an actress by playing various award – nominated comedic roles in several hit films. It began with blockbuster film Duyung released in 2008 where she plays the title role, a mermaid. In this film, Maya was appreciated for performing all the underwater scenes on her own in the open sea of Sipadan Island. In the same year, she received her second Most Popular Actress (Film) Award at the Anugerah Bintang Popular Berita Harian (Popular Star Awards) 2008, following her mass popularity for the last two years. In 2009, she starred in Pisau Cukur, a hit comedy film about gold diggers where she performed more comedy scenes than her role in Duyung. In 2010, she played a famous entertainment show host who fall in love with a guy from a rural village in the hit romantic comedy movie Cun.

In November 2011, despite her urbanised and modern figure, Maya surprised her fans and movie-goers with her brilliant and moving performance as a young women from a rural village struggling with life and love, in her biggest commercial success Ombak Rindu. Ombak Rindu is currently Malaysia's third overall highest grossing feature film. Her deep, memorable performance in the film gained her the Best Actress Award at Malaysia Screen Award and Malaysia Film Festival in 2012 and her third Most Popular Actress (Film) Award at the Anugerah Bintang Popular Berita Harian (Popular Star Awards) 2011.

Afterwards, Maya portrayed two roles she never played before in Lagenda Budak Setan 2 and Sejoli, and managed to stand out despite acting alongside other fellow established actors. Her genuine tickling portrayal of a girl looking for her true love in the latter film gained her the award of Best Actress in Comedy Role in the second Anugerah Lawak Warna in 2014. Waiting to be released are her two thriller/suspense movies of Jwanita and Nota'', with the latter film directed and produced with collaboration between local and Japanese film producers and crews.

Until now, Maya is acknowledged as an actor with most successful horror role performance in the local film industry and often cited by her fans and local movie-goers as a banshee, a mermaid and Izzah (her role in Ombak Rindu), thanks to her impressive and lasting performances in the respective films.

In 2002, Maya recorded her debut music album, Erti Cinta (Definition of Love). The album garnered her nominations for Best New Singer and Best Video awards[2] at the Anugerah Industri Muzik (Malaysia's version of the Grammy Awards). Her second album is Bukan Qalamaya (2004). On 3 June 2013, Maya signed up with Warner Music Malaysia and made her comeback from 9 years hiatus in music, with a single Bintang Syurga.[3] Her long awaited latest album titled Teka-Teki was released on 24 March 2014,[4] and was launched then on 18 April 2014, at No Black Tie. The official music video of Teka-Teki was also launched after that on Warner Music Malaysia's YouTube channel.[5]

Maya's mass popularity as an actress and entertainer has seen her appointed as ambassador for various products starting with Wella in 2001, followed by Pantene, and Yishion in 2003. In 2006 she was appointed Malaysian first Ambassador and Power Icon for local telecommunications giant Celcom By 2007 she is the only female brand ambassador for Celcom, a role she shares with other celebrities such as Steven Gerrard, Michael Owen, Leehom Wang, Robert Pires and Indonesian popular band, Peterpan. The same year Maya was given the prestigious role of spokesperson for L'Oréal Paris Malaysia and until now endorses its skincare, cosmetics and haircare line. Other partnerships since then include Tag Heuer, Nescafe, Innershine, Dulux, Vono. Sorella and GreenTech Malaysia. 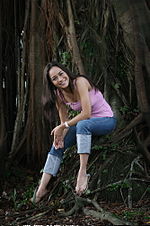 Having been influenced by her father, Maya has been very passionate about the environment from a young age. Maya is actively involved in various campaigns for environmental and animal protection and often works with the Malaysian Nature Society and World Wildlife Fund (WWF). She also has her own campaign drive MayaLovesNature, the first two of which involved working with 22000 schoolchildren from 14 different primary schools targeting awareness of excessive use and waste of plastic bags. 2012 sees her as ambassador for the governments new recycling initiative and as spokesperson for the Geological Institute of Malaysia.