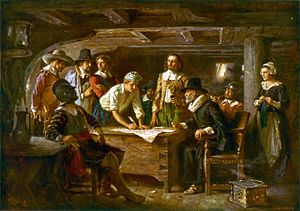 The Mayflower Compact was the first governing document of Plymouth Colony. It was written by separatist Congregationalists who called themselves "Saints". Later they were referred to as Pilgrims or Pilgrim Fathers. They were fleeing from religious persecution by King James of England. They traveled aboard the Mayflower in 1620 along with adventurers, tradesmen, and servants, most of whom were referred to by the Separatists as "Strangers".

The Mayflower Compact was signed aboard ship on November 11, 1620 by the Pilgrims. They used the Julian Calendar, also known as Old Style dates, which, at that time, was ten days behind the Gregorian Calendar. Signing the covenant were 41 of the ship's 101 passengers,[1][2] while the Mayflower was anchored in what is now Provincetown Harbor within the hook at the northern tip of Cape Cod.[3]

Reasons for the Compact

The Mayflower was originally bound for the Colony of Virginia, financed by the Company of Merchant Adventurers of London. Storms forced them to anchor at the hook of Cape Cod in what is now Massachusetts. With provisions running short, it was unwise to continue. This inspired some of the Strangers to proclaim that since the settlement would not be made in the agreed upon Virginia territory, they "would use their own liberty; for none had power to command them...."[4] To prevent this, the Pilgrims chose to establish a government. The Mayflower Compact was based simultaneously upon a majoritarian model (taking into account that women and children could not vote) and the settlers' allegiance to the king. It was in essence a social contract in which the settlers consented to follow the compact's rules and regulations for the sake of order and survival.[5] The Pilgrims had lived for some years in Leiden, a city in the Dutch Republic. "Just as a spiritual covenant had marked the beginning of their congregation in Leiden, a civil covenant would provide the basis for a secular government in America."[6]

In November 1620, the Mayflower anchored at what is now Plymouth, named after the major port city in Devon, England from which she sailed. The settlers named their settlement "New Plimoth" or "Plimouth", using the Early Modern English spellings of the early 17th century.[citation needed]

Although the original document has been lost,[7] three versions exist from the 17th century: printed in Mourt's Relation (1622),[8][9] which was reprinted in Purchas his Pilgrimes (1625),[10] hand written by William Bradford in his journal Of Plimoth Plantation (1646),[11] and printed by Bradford's nephew Nathaniel Morton in New-Englands Memorial (1669).[7] The three versions differ slightly in wording and significantly in spelling, capitalization and punctuation.[9] William Bradford wrote the first part of Mourt's Relation, including its version of the compact, so he wrote two of the three versions. The wording of those two versions is indeed quite similar, unlike that of Morton. Bradford's handwritten manuscript is kept in a vault at the State Library of Massachusetts.[12]

In the name of God, Amen. We, whose names are underwritten, the loyal subjects of our dread Sovereign Lord King James, by the Grace of God, of Great Britain, France, and Ireland, King, defender of the Faith, etc.

Having undertaken, for the Glory of God, and advancements of the Christian faith and honor of our King and Country, a voyage to plant the first colony in the Northern parts of Virginia, do by these presents, solemnly and mutually, in the presence of God, and one another, covenant and combine ourselves together into a civil body politic; for our better ordering, and preservation and furtherance of the ends aforesaid; and by virtue hereof to enact, constitute, and frame, such just and equal laws, ordinances, acts, constitutions, and offices, from time to time, as shall be thought most meet and convenient for the general good of the colony; unto which we promise all due submission and obedience.

In witness whereof we have hereunto subscribed our names at Cape Cod the 11th of November, in the year of the reign of our Sovereign Lord King James, of England, France, and Ireland, the eighteenth, and of Scotland the fifty-fourth, 1620.[13]

The 'dread sovereign' referred to in the document used the archaic definition of dread—meaning awe and reverence (for the King). Also, as noted above, the document was signed under the Old Style Julian calendar, since England did not adopt the Gregorian calendar until 1752. The Gregorian date would be November 21. 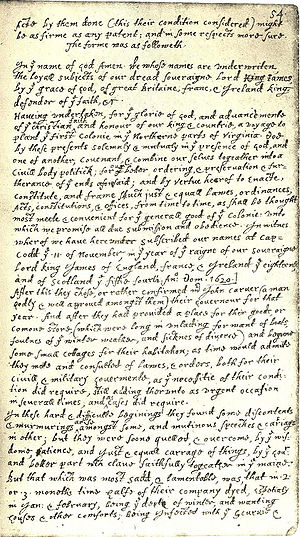 Bradford's transcription of the compact

A list of 41 male passengers who signed the document was supplied by Bradford's nephew Nathaniel Morton in his 1669 New England's Memorial. Thomas Prince first numbered the names in his 1736 A Chronological History of New-England in the form of Annals.[1] Because the original document has been lost, Morton (1669) is our sole source for the signers. Although he probably had access to the original document, he could not have known simply by inspecting it the actual order that it was signed. Morton's arrangement of names is probably not the arrangement of names on the original document, and the names may not have been arranged in any orderly fashion. Prince's numbers are based solely on Morton (1669) as he himself stated. His numbers are unfortunate because he could not have known the order that the original document was signed.[7]

Prince numbered the names in their original 1669 Morton order (the same as the 1826/55 Morton order) on successive pages (85–86), two columns of eight names each on one page (headed 1 Carver and 9 Martin) and two columns of 13 and 12 names each on the next page (headed 17 Cooke and 30 Williams). The third (1852) edition placed these numbered names in two columns (the first column headed 1 Carver with 8 Samuel Fuller and 15 Edward Tilley below, and the second column headed 22 Turner with 29 Priest and 36 Clarke below) on a single page (172). He added titles (Mr. or Capt.) to eleven names given those titles by William Bradford in the list of passengers at the end of his manuscript.[1][11] He attributed the lack of Mr. Bradford to Bradford's modesty. Prince's numbered order of signers is now used to identify ancestors in genealogical charts.[7]

The following list of signers is organized into the six short columns of Morton (1669) with the numbers and titles of Prince. The names are given their modern spelling according to Morison (1966).[14] Use the numbers given for the order used by genealogists and half of unnumbered lists (Samuel Fuller will be the eighth name), but merge the half columns vertically into full columns for the order used by the other half of unnumbered lists (John Turner will be the eighth name).