Maynor Alexis Figueroa Róchez (born 2 May 1983) is a Honduran professional footballer who plays as a centre back or left back. He currently plays for FC Dallas of Major League Soccer, and the Honduras national football team.

He spent most of his career at Wigan Athletic, where he made 179 Premier League appearances and won the 2013 FA Cup Final.

Figueroa has made over 100 international appearances since 2003, including at three CONCACAF Gold Cups, the 2010 FIFA World Cup and the 2012 Olympics.

Born in Jutiapa, Atlántida,[1] Figueroa started his career with Victoria, before moving to Olimpia in 2003. He later became club captain. In 2007, Figueroa received offers from Major League Soccer clubs, one of which was revealed to be New England Revolution, but Olimpia's administrator, Osman Madrid, turned down all the offers. Figueroa has had previous interest from foreign clubs aside from those in MLS, including Club Toluca of Mexico making offers during 2007. However, during an interview, Madrid indicated the terms sought by other teams had been neither agreeable nor economically favourable to Olimpia or Figueroa.[citation needed]

On 20 December 2007, Honduran newspaper El Heraldo reported that, as a result of interest expressed by the Premier League club Wigan Athletic, Figueroa would be travelling to England. In January 2008, Figueroa joined Wigan on loan for the rest of the 2007–08 season.[3] In July 2008, after a complicated process involving work permit and visa issues, Figueroa rejoined Wigan on loan for a further six months, after which Wigan had the option to make the deal permanent following a successful loan spell.[4]

On 23 December 2008, Wigan announced Figueroa had signed a three-and-a-half-year contract to join permanently.[5] He scored his first goal for Wigan on 11 January 2009. He scored a close range header to secure a late winner against Tottenham Hotspur.[6] On 12 December 2009, Figueroa scored a goal against Stoke City from his own half to put Wigan in the lead. Figueroa noticed Stoke goalkeeper Thomas Sørensen off his line at a free kick and struck the ball quickly to send the ball soaring over Sørensen and into the net.[7] Although the match ended 2–2, Figueroa made the headlines the following day, with Alan Hansen calling it a candidate for Goal of the Season.[8] Indeed, Figueroa's goal was chosen as Match of the Day's Goal of the Season for 2009–10. By the end of the 2009–10 campaign, he had made 81 appearances and scored twice in all competitions for Wigan. On 26 February 2011, he made his 100th Premier League appearance, playing the full 90 minutes at left-back in a 4–0 defeat against Manchester United at the DW Stadium.

The 2010–11 campaign proved difficult for Wigan and Figueroa. However he scored a goal against fellow relegation struggling side Birmingham City on 19 March 2011 that led to a 2–1 win for Wigan.[9] On the last day of the season, Wigan needed to win and have results go their way in order to secure Premier League safety. Figueroa provided the breakthrough for the away side in the 78th minute, setting up Hugo Rodallega to win the game 1–0 at Stoke City and confirm Wigan's safety in the Premier League.[10]

During Wigan's first League Cup game of the 2012–13 season, Figueroa scored from 35 yards out, as Wigan defeated Nottingham Forest 4–1 at the City Ground.[11] 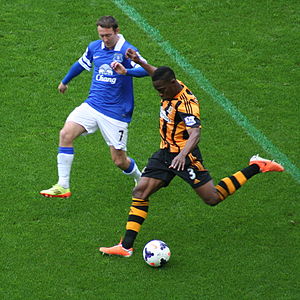 On 21 October 2014 Figueroa returned to Wigan Athletic on a month-loan[14] and went on to play in the 0–0 draw against Millwall the same day.[15] After 5 consecutive games for the club since joining on loan, Wigan extended his loan deal until 30 December 2014.[16]

He was recalled to Hull on 22 December 2014, along with Tom Ince from Nottingham Forest.[17] 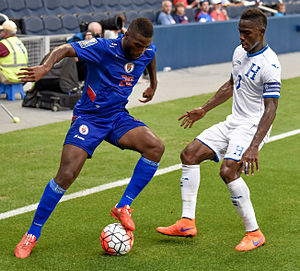 Figueroa made his debut for Honduras in 2003 and has since gone on to score three goals, against Belize, Cuba and Jamaica. He was part of the Honduras squad at the 2005 and 2007 CONCACAF Gold Cups. He was also named in the 23-man squad for the 2010 FIFA World Cup in South Africa. Figueroa played out of position as a centre back at the World Cup, due to the form of Emilio Izaguirre. Figueroa also represented Honduras at U-20 and U-23 level from 1999 to 2003 and 2001 to 2003 respectively, scoring once in 3 games for the U-20s and failing to score in eight outings with the U-23 side. He has won a total of 112 caps, scoring 4 goals since his debut back in 2003.

Figueroa is married to Sandra Norales, a handball player who is also an international with the Honduras women's national handball team or Federación Hondureña de Balonmano (FEHBALM).[21]