McAlester is a city in Pittsburg County, Oklahoma, United States. The population was 17,783 at the 2000 census. It is the county seat of Pittsburg County.[3] It is currently the largest city in the Choctaw Nation of Oklahoma, followed by Durant.

The town gets its name from J. J. McAlester, who later became Lieutenant Governor of Oklahoma and was immortalized as a character in the 1968 novel True Grit, which was made into feature films in 1969 and 2010.

McAlester is the home of the Oklahoma State Penitentiary, site of an "inside the walls" prison rodeo from which ESPN's SportsCenter once broadcast. Sometimes Oklahomans refer to the state prison simply as "Big Mac" or "McAlester," and the town is referenced in that manner in the opening pages of The Grapes of Wrath when Tom Joad is released from there. The prison was also the site of a 1973 riot that lasted for days and is generally regarded as one of the worst in American history.[4]

McAlester is known in political circles for having been the home base of several noted American politicians - U.S. Speaker of the House Carl Albert, who was once a heartbeat from the presidency, and longtime Oklahoma State Senator Gene Stipe, whose career ended in a series of legal problems. Former Oklahoma Governor George Nigh and Oklahoma Supreme Court Chief Justice Steven W. Taylor also hail from McAlester. McAlester is still known in Oklahoma as the "Capital of Little Dixie," for its old-time Democratic politics.

The crossing of the east-west California Road with the north-south Texas Road formed a natural point of settlement in Tobucksy County of the Choctaw Nation. Alyssia Young, who emigrated from Mississippi to the Indian Territory, first established a settlement at the intersection of the two roads in 1838. The town there was named after Perry, being called Perryville. At one time Perryville was the capital of the Choctaw Nation and County Seat of Tobucksy County. During the American Civil War the Choctaw allied with the Confederate States of America (CSA) as the war reached Indian Territory [1]. A depot providing supplies to Confederate Forces in Indian Territory was set up at Perryville. On August 26, 1863 a force of 4,500 Union soldiers crossed the Canadian River and destroyed the Confederate munitions depot at Perryville. This became known as the Battle of Perryville Indian Territory. Union Major General James G. Blunt, finding the Confederate supplies and realizing that Perryville was a major supply depot for Confederate forces ordered the town burned. The town was rebuilt, but never reached its prewar glory or population.

After the end of the war and the surrender of General Stand Watie, Captain James Jackson McAlester obtained a job with the trading company of Reynolds and Hannaford. McAlester, an employee of licensed traders Reynolds and Hannaford convinced the firm to locate a general store at Tupelo in the Choctaw Nation. McAlester had learned of coal deposits in Indian Territory during the War Between the States while serving as a Captain with the 22nd Arkansas Volunteer Infantry (Confederate). At Fort Smith, Arkansas before going to work with Reynolds and Hannaford, McAlester had received maps of the coal deposits from engineer Oliver Weldon, who had served with McAlester during the war.

Weldon had worked for the U.S. surveying Indian Territory before the war and knew of the rich coal deposits. Hearing of the railroad plans to extend through Indian Territory and knowing that rich deposits of coal were in an area north of the town of Perryville, McAlester convinced Reynolds and Hannaford that Bucklucksy would be a more suitable and profitable location for the trading post. McAlester constructed a trading post/general store at that location in late 1869 (Presley 1978, p. 72). The general store was an immediate success, but J. J. McAlester recognized an even greater opportunity in the abundance of coal deposits in the area, and he began obtaining rights to the coal deposits from the Choctaws anticipating the impending construction of a rail line through Indian Territory.

By virtue of having been the first to extend its line to the northern border of Indian Territory, the Union Pacific Railway Southern Branch earned right of way and a liberal bonus of land to extend the line to Texas. A number of New York businessmen, including Levi P. Morton, Levi Parsons, August Belmont, J. Pierpont Morgan, George Denison and John D. Rockefeller were interested in extending rail line through Indian Territory, and the Missouri-Kansas-Texas Railroad, familiarly called the Katy Railroad, began its corporate existence in 1865 toward that end. Morton and Parsons selected a site near the Kansas border with Indian Territory at which a town operated by the railroad could be located, with the settlement incorporated under the name of Parsons, Kansas, in 1871.

That same year, J.J. McAlester, after buying out Reynolds’ share of the trading post, journeyed with a sample of coal to the railroad town in hopes of persuading officials to locate the line near his store at Bucklucksy. The location of the trading post on the Texas Road weighed in its favor, given that the Katy Railroad line construction roughly followed the Shawnee Trail – Texas Road route southward to the Red River. The line reached Bucklucksy in 1872, and Katy Railroad officials named the railway stop McAlester (Nesbitt 1933, pp. 760–61). With the coming of the railroad, businesses in nearby Perryville began relocating to be near the McAlester Rail Depot, marking the end of Perryville and the beginning of McAlester. On August 22, 1872, J.J. McAlester married Rebecca Burney (born 1841 in Mississippi - died May 4, 1919, in Oklahoma). Rebecca was a member of the Chickasaw Nation and this made it possible for McAlester to gain citizenship and the right to own property in both the Choctaw and Chickasaw nations. This allowed McAlester to legally obtain his own mineral rights to the coal deposits. McAlester being a savvy businessman quickly obtained land near the intersection of the north-south and east-west rail line intersection. McAlester opened a second general store on this corner and was able to continue doing business selling coal to the railroads.

Fritz Sittle (Sittel), a Choctaw citizen by marriage and one of the first settlers in the area, urged visiting newspaperman Edwin D. Chadick in 1885 to pursue the possibility of establishing an east-west rail line to run through the coal mining district at Krebs that would connect with the north-south line at McAlester. Chadick eventually found financing and established the Choctaw Coal and Railway in 1888, but was unable to come to terms with J.J. McAlester over the issue of right of way.

Chadick and his investors purchased land to the south of McAlester's General Store, and where the two rail lines crossed formed a natural trading crossroads, and quickly became a bustling community designated as South McAlester. The original town location became known familiarly as North McAlester or North Town although early U.S. Census records simply identified it as McAlester.

The two towns operated as somewhat separate communities until 1907, when the United States Congress passed an act joining the two communities as a single municipality, the action being required since the towns were under federal jurisdiction in Indian Territory. The separate entities of McAlester and South McAlester were combined under the single name McAlester, with office-holders of South McAlester as officials of the single town. Designation as a single community by the United States Post Office came on July 1, 1907, nearly five months before Oklahoma Statehood, which caused a redrawing of county lines and designations, causing the majority of Tobucksy County to fall within the new lines of Pittsburg County.

The city had 8,144 inhabitants upon statehood, more than a fourth of which were foreign-born.[5]

McAlester was the site of the 2004 trial of Terry Nichols on Oklahoma state charges related to the Oklahoma City bombing (1995). On December 25, 2000 an ice storm hit the area leaving residents without electrical service and water for more than two weeks; in January 2007 another devastating ice storm crippled the city, leaving residents without power and water for more than a week.

McAlester is located at the intersection of U.S. Route 69 and Oklahoma State Highway 270, in Pittsburg County, Oklahoma.[6] According to the United States Census Bureau, the city has a total area of 41 square miles (110 km2), of which 40.6 square miles (105 km2) is land.

There were 6,584 households out of which 29.1% had children under the age of 18 living with them, 46.6% were married couples living together, 13.7% had a female householder with no husband present, and 36.4% were non-families. 33.7% of all households were made up of individuals and 16.6% had someone living alone who was 65 years of age or older. The average household size was 2.31 and the average family size was 2.93. 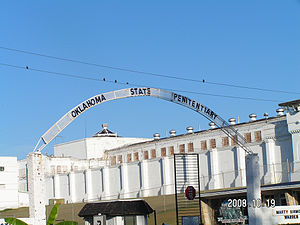 The Oklahoma State Penitentiary is a large source of employment and local revenue in McAlester.[13]

Two Oklahoma Department of Corrections facilities, the Oklahoma State Penitentiary and the Jackie Brannon Correctional Center, are in McAlester.[14][15]

The following sites in McAlester are listed on the National Register of Historic Places: