From Infogalactic: the planetary knowledge core
Jump to: navigation, search
For people with the surname McDonnell, see McDonnell (surname).

Jim McDonnell founded J.S. McDonnell & Associates in Milwaukee, Wisconsin in 1928 to produce a personal aircraft for family use.[1] The economic depression from 1929 ruined his plans and the company collapsed. He went to work for Glenn L. Martin. He left in 1938 to try again with his own firm, McDonnell Aircraft Corporation, based near St. Louis, Missouri, in 1939.[2]

World War II was a major boost to the new company. It grew from 15 employees in 1939 to 5,000 at the end the war and became a significant aircraft parts producer, and developed the XP-67 Bat fighter prototype.[3] McDonnell also developed the LBD-1 Gargoyle guided missile.[4] McDonnell Aircraft suffered after the war with an end of government orders and a surplus of aircraft, and heavily cut its workforce. The advent of the Korean War helped push McDonnell into a major military fighter supply role. 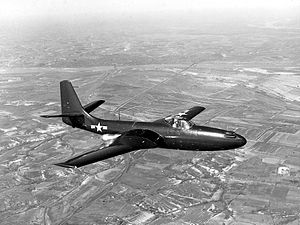 In 1943, McDonnell began developing jets when they were invited to bid on a US Navy contest and eventually building the successful FH-1 Phantom in the post-war era. The Phantom introduced McDonnell's telltale design with engines placed forward under the fuselage and exiting just behind the wing, a layout that would be used successfully on the F2H Banshee, F3H Demon, and the F-101 Voodoo. Dave Lewis joined the company as Chief of Aerodynamics in 1946. He led the development of the legendary F-4 Phantom II in 1954, which was introduced into service in 1960.

Lewis became Executive Vice President in 1958, and finally became President and Chief Operating Officer in 1962. Lewis went on the manage Douglas Aircraft Division in 1967 after the McDonnell Douglas merger. In 1969, he returned to St. Louis as President of McDonnell Douglas.

McDonnell made a number of missiles, including the pioneering Gargoyle and unusual ADM-20 Quail, as well as experimenting with hypersonic flight, research that enabled them to gain a substantial share of the NASA projects Mercury and Gemini. The company was now a major employer, but was having problems. With no civilian side of the company, every peacetime downturn in procurement led to lean times at McDonnell. 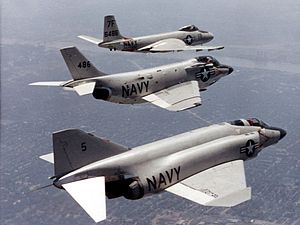