McKees Rocks, also known as "The Rocks", is a borough in Allegheny County, in western Pennsylvania, along the south bank of the Ohio River. The borough population was 6,104 at the 2010 census.[1]

In the past, the city was known for its extensive iron and steel interests. Also, there were large railroad machine shops, and manufacturers of locomotives, freight and passenger cars. Other city factories manufactured springs, enamel ware, lumber, wall materials, plaster, nuts and bolts, malleable castings, chains and forgings, tin ware, concrete, and cigars.

The Pittsburgh, Allegheny and McKees Rocks Railroad is located in an area along the river known as the "Bottoms".

The name of the borough is often incorrectly written as "Mc Kees Rocks," "McKee's Rocks," or "McKees Rock," but the official name is "McKees Rocks." The USPS official spelling is "MC KEES ROCKS",[2] possibly because the all-caps spelling could not otherwise represent the internal capital K.

It is within the Sto-Rox School District, which serves McKees Rocks and neighboring Stowe Township. The local high school is Sto-Rox High School.

The McKees Rocks Bridge, which carries traffic between McKees Rocks and Pittsburgh, is the longest bridge in Allegheny County, at 7,293 feet (2,223 m). It has one of the largest Indian mounds in the state, built by the Adena and Hopewell peoples a thousand years before Europeans entered the area.

For thousands of years, Native Americans inhabited the region. The Adena culture built a large earthwork mound here, which was a burial site. It was augmented in later years by members of the Hopewell culture. This is the largest mound in the state. Exploration by people in the area in the late 19th century found that it contained the remains of 33 people. The mound is located on a promontory near the Ohio River; as a result, erosion has taken away some of the mound's property.[3]

This site was considered by George Washington as a possible location for Fort Pitt, which he eventually ordered built on the site of the destroyed French Fort Duquesne in what is now Pittsburgh's Point State Park.[4]

Mann's Hotel, which was possibly one of the oldest buildings in the Pittsburgh area,[7] was located at 23 Singer Avenue in McKees Rocks. It was believed to have been built around 1803, although some sources put the construction in the 18th century.[7] It is rumored that George Washington stayed there[7] when he was surveying the Indian mound. On October 12, 2009, Mann's Hotel was condemned due to neglect and had to be demolished because of its deteriorating condition.[8][7]

McKees Rocks was the site of one of the pivotal labor conflicts of the early 20th century, the 1909 McKees Rocks Strike. In the summer and early fall of 1909, some 5,000 workers of the Pressed Steel Car Company's plant at McKees Rocks went on strike, joined by 3,000 others who worked for the Standard Steel Car Company of Butler and others in New Castle.[9] The strike, led by organizers of the Industrial Workers of the World (IWW), was repressed by armed security guards and the state militia, resulting in at least a dozen deaths. The conflict involved participants on both sides.[10]

The city hit its peak of population in 1930. After that, there was population decline due to the Great Depression, industrial restructuring and suburbanization after World War II.

Households: There were 2,905 households out of which 26.0% had children under the age of 18 living with them, 29.4% were married couples living together, 21.3% had a female householder with no husband present, and 43.1% were non-families. 37.8% of all households were made up of individuals and 17.2% had someone living alone who was 65 or older. The average household size was 2.24 and the average family size was 2.96.

The multimillion-dollar, 40,000 sq ft (3,700 m2) Father Ryan Cultural Arts Center opened in 2008, at 420 Chartiers Avenue, adjacent to the F.O.R. Sto-Rox Library (at 500 Chartiers Avenue). It offers many creative and performing arts courses to the public.

The "Bottoms" neighborhood is the site of the McKees Rocks Indian Mound, designated as a National Historic Landmark. The oldest human bones in eastern North America have been discovered here during an excavation. 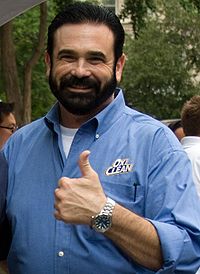 Billy Mays was from McKees Rocks

McKees Rocks is the fictional setting of the novels Duffy's Rocks by Edward Fenton, Riot by William Trautmann, and more than a dozen novels by the crime writer K.C. Constantine.[citation needed]