The McLaren MP4-19 is a Formula One racing car that was built by McLaren for the 2004 season. It was designed by Adrian Newey, and driven by Kimi Räikkönen and David Coulthard. It was described as a "debugged version" of the ill-fated McLaren MP4-18, but it was not a successful car. The team suffered various problems concerning reliability at the beginning of the season, with eight retirements in five races. By mid-season a new car, the MP4-19B, was required. This was an all-new car with a radically redesigned aerodynamic package. The results were immediately positive and gave the team hope of a better end to the season. Coulthard qualifed third for the MP4-19B's first race at the French Grand Prix, followed by further points and podiums from both drivers. The upgrade was finally justified when Räikkönen gave the team its only win of the season when he won the Belgian Grand Prix.

For most of the season, the MP4-19 featured a narrow, needle-like nose design first seen on the MP4-18. A wider, flatter nose was trialled at the Italian Grand Prix but was not retained.[1] This would later be carried over to the MP4-20 in 2005, whilst the needle nose would be reused on the MP4-21 in 2006.

The team eventually finished fifth in the constructors championship with 69 points. 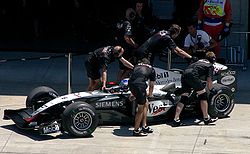 Members of the McLaren Formula One team push driver Kimi Räikkönen's MP4-19 into the garage during qualifying for the US Grand Prix at Indianapolis in 2004.