The McLaren MP4-24 was McLaren-Mercedes' Formula One car for the 2009 Formula One season. It was revealed at McLaren's headquarters in Woking, United Kingdom on 16 January 2009.[2]

In testing, the MP4-24 was proven slower than its rivals due to aerodynamic problems, with Lewis Hamilton and Heikki Kovalainen repeatedly at the bottom of the timesheets. The car came under much scrutiny from team members and other critics alike. Martin Whitmarsh, McLaren team principal, said the team "had not done a good enough job". He also went on to say "We have an underdeveloped car, we do not have sufficient aerodynamic downforce and we would like to focus on rectifying that as quickly as we can."[4]

The car was originally designed with a conventional diffuser. The MP4-24 was fitted with a modified diffuser based on similar principles to the double-decker designs at the 2009 Malaysian Grand Prix after the FIA confirmed that such components were legal, after several teams had asked the FIA to clarify the matter.

After the British Grand Prix, the midpoint of the 2009 season, McLaren had scored just 13 Constructor's World Championship points with Hamilton scoring 9 and Kovalainen 4. By the same point in 2008 they had scored 72 points and Hamilton was jointly leading the Driver's World Championship with Felipe Massa on 48 points. Hamilton had made public calls to scrap the car and a former team owner turned commentator Eddie Jordan had proclaimed it as "possibly the worst car McLaren have ever designed".[5]

The impact of upgrades to Hamilton's car for the next race at the Nürburgring for the German Grand Prix were positive and saw him qualify in 5th, with Kovalainen in 6th place. However, a collision with Mark Webber's Red Bull at the first corner punctured a tyre and damaged the undertray of the car which effectively ended any chance of competing for a points scoring position, and Hamilton finished the race in 18th and last place with Kovalainen scraping into the points in 8th.

There was a 3 week break between Germany and the next round at Hungary by which time both cars had been upgraded to the new specification. Again, the weekend started well with both cars showing good pace and Hamilton qualified 4th and Kovalainen 6th. This time Hamilton was able to demonstrate the true effectiveness of the upgraded car by winning the race in convincing style. Acknowledging his previous remarks live on the BBC after the race, Eddie Jordan expressed his amazement at how McLaren had managed to turn the car into a race winner. Despite disappointing results at Spa and Monza, Hamilton claimed his second win of the year under the lights of Singapore's Marina Bay from pole position, and a pair of third places in Suzuka and São Paulo helped McLaren clinch third place in the Constructors championship with 71 points, pipping rivals Ferrari by 1 point. 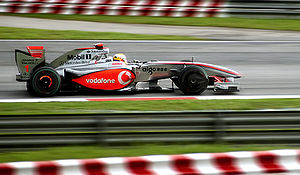 Lewis Hamilton driving the MP4-24 at the 2009 Malaysian Grand Prix.

† Driver failed to finish, but was classified as they had completed >90% of the race distance.
‡ Half points awarded as less than 75% of race distance completed.