The McLaren MP4/10 was the car with which the McLaren team competed in the 1995 Formula One season. It was driven mainly by Mark Blundell, who started the year without a drive, and Mika Häkkinen, who was in his second full season with the team. The car was also driven by 1992 champion Nigel Mansell and Jan Magnussen. 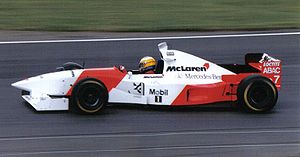 Mark Blundell driving the MP4/10B at the 1995 British Grand Prix.

1995 was a season of great expectation for the team. The disappointing 1994 alliance with Peugeot had been annulled, and Mercedes-Benz switched to the team from Sauber. In addition, Mansell had been tempted out of "retirement" to partner the young Finn Häkkinen. The MP4/10 was a radical design, incorporating a "needle-nose" and a wing mounted atop the airbox, among other innovations.

However, it became apparent that Nigel Mansell was unable to fit properly in the narrow cockpit, and he was forced to miss the first two races of the season whilst a wider monocoque was built McLaren MP4/10C. His racing return lasted just two further Grands Prix before he left altogether, disgusted with the car's poor performance. Blundell, who had deputised in Brazil and Argentina, became a permanent race driver.

The car's main handling problem was a lack of front-end grip, allied to the often unreliable engine. However, the package proved competitive enough for the team to usually be "best of the rest", behind Benetton, Williams and Ferrari, and Häkkinen was able to score two podium finishes. Team-mate Blundell also took several points finishes.

File:Mclaren MP4 10 B 01.jpg
McLaren MP4/10B, driven only twice by Nigel Mansell, with widened cockpit on display at The Donington Collection .

The McLaren MP4/10B update made its début at Imola and was retained for most of the season. A further modification, the MP4/10C, appeared at the Portuguese and European Grands Prix, but was not used further.

McLaren endured a mixed end to the season. Häkkinen missed the Pacific GP with a case of appendicitis and was replaced by the rookie Magnussen, but then returned to finish a fine second at Suzuka. This was tempered by the fact that Blundell wrote off a chassis in practice, but this setback paled in comparison to Häkkinen's accident during qualifying for the final race of the season at Adelaide. A sudden puncture saw his car fly out of control and hit a concrete wall at high speed. Häkkinen was pulled out of his car unconscious with blood pouring from his mouth and nose. However, he made a full recovery for the first grand prix of the next year, which was also in Australia.

The team eventually finished fourth in the Constructors' Championship, with 30 points.