The McLaren MP4/13 was a racing car that the McLaren Formula One team used during the 1998 Formula 1 season. Driven by Mika Häkkinen and David Coulthard, who were retained from the previous season, the car proved to be the dominant car of the season, taking Häkkinen to his first Driver's Championship and securing McLaren's first constructor's title since 1991.

Designer Adrian Newey had joined McLaren from Williams F1 in 1997, but was unable to influence the design of the McLaren MP4/12 other than adjustment during the season. The work was rewarded when the MP4/12 took a 1-2 win at the 1997 European Grand Prix.

When the 1998 season got under way four months later it became clear that Newey had adapted to the rule changes for 1998 best. With the cars now narrower and running on grooved tyres, the MP4/13 was the car to beat.

The dominance of the MP4/13 was displayed in the opening race of the season, the 1998 Australian Grand Prix. Drivers Mika Häkkinen and David Coulthard outclassed the competition by leaving every competitor at least a lap behind. Adrian Newey's aerodynamic design was by far the most efficient one and Mercedes produced the most powerful engine of the season. McLaren's dominance continued on the second race of the season in Brazil, but from the next GP in Argentina, Ferrari started closing the huge gap. However, the MP4/13 retained its superiority on high-speed tracks like Hockenheim and Silverstone, while Ferrari's F300 was closer to the McLaren on more technical circuits. Coulthard spoke of the MP4/13 later on, saying the car was fast but it understeered through slow corners; this was due to Newey's design that maximized the car's aerodynamic grip over its mechanical grip.

While Ferrari's Michael Schumacher put up a good fight when the season progressed, Häkkinen became world champion that year, despite McLaren's reliability problems. Also, McLaren won the constructors' championship, with Häkkinen winning eight Grands Prix and Coulthard one. This was McLaren's first championship victory since 1991 with McLaren great Ayrton Senna, and their most successful year since the peak of the Prost-Senna feud of the 1989 season.

The record time for the Goodwood Festival of Speed hillclimb was set in 1999 when Nick Heidfeld drove an MP4/13 up the hill in 41.6 seconds.[1] 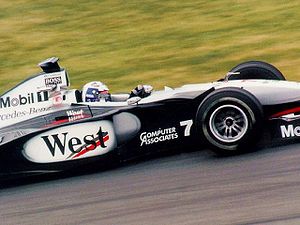