The McLaren MP4/14 was the 1999 racecar for the McLaren Formula One racing team. The chassis was used by Mika Häkkinen in winning the Drivers' Championship for the second time in a row, although the Constructors' Championship was won by Ferrari.

It was without doubt the fastest car of the season. Aerodynamics were even more advanced than the previous year's excellent MP4/13, while the Mercedes engine remained the most powerful on the grid. However serious reliability problems as well as errors by the drivers meant that the constructor's championship was won by Ferrari. 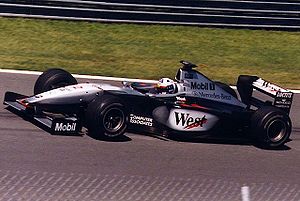 David Coulthard driving the MP4/14 at the 1999 Canadian Grand Prix.
File:Mclaren MP4 14A chassis 4.jpg
McLaren MP4/14 on display at the Donington Collection. The car carries chassis number 4 and is in the state it crossed the line to win both the 1999 Japanese Grand Prix and the Formula One Drivers' Championship for its driver, Mika Häkkinen.
File:McLaren Hakkinen Science Museum.JPG
Part of a technical display of London's Science Museum: a McLaren Mercedes MP4/14, driven by Mika Hakkinen during the 1999 German Grand Prix.