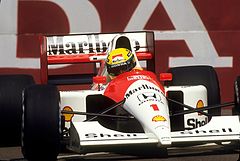 The McLaren MP4/6 is a Formula One racecar that was designed by Neil Oatley for the 1991 F1 season. It was the first McLaren to be powered by a Honda V12 engine. The car was tested by Gerhard Berger in the off-season, but he was unimpressed with the new engine, feeling it was underpowered for what it was, especially compared to Honda's V10 engine in the previous year's car. When Ayrton Senna returned for pre-season testing, he knuckled down to try to solve the engine's problems. McLaren's domination in the early part of the year was mainly due to the lack of reliability of the Williams FW14.

The MP4/6 raced throughout 1991 with a manual "H" pattern gearbox. A semi-automatic transmission was tested during the season, but was never regarded as good enough to be used in a race. Ferrari and Williams were the only teams using semi-automatic gearboxes during 1991. This makes the MP4/6 the last Formula One car to win a World Championship, either drivers or constructors, using a manual transmission or a V12 engine. 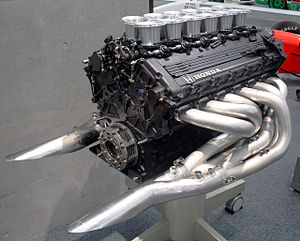 Senna won the first four races of the season, in the USA, an emotional victory in Brazil, San Marino and Monaco before Williams and Nigel Mansell found their feet with their remarkable FW14 car, which dominated in the mid season. Consistent podium finishes throughout the year helped McLaren, but Senna insisted that Honda step up their engine development programme and demanded further improvements to the car before it was too late. Honda responded with an updated version of the V12 engine, while Oatley redesigned various features of the car, especially the sidepods and wings. Failed electronics and a botched pitstop scuppered Williams's chances in Belgium and Portugal when in the lead allowing McLaren to take their fourth straight Constructors' Championship and Senna his third and last Drivers' Championship.

The MP4/6 was considered by some to be the most competitive car in the field until Williams sorted the FW14, which was aerodynamically and technically more advanced.

For the early races of 1992, McLaren used the MP4/6 (upgraded to MP4/6B spec) and Senna was able to take it to 3rd place in the South African Grand Prix before it was replaced by the MP4/7A for the Brazilian Grand Prix.

The MP4/6 took 8 Grand Prix wins, 10 pole positions and scored 148 points in its career. The car brought a close to McLaren's domination of the sport, leaving the door open for Williams.