The McLaren MP4/8 was a Formula One racing car which competed in the 1993 season. It raced in all sixteen Grands Prix, scoring five wins. The engine was a Ford HBD7 3.5 V8. The car was designed by Neil Oatley around advanced racecar technology, including a semi-automatic transmission, active suspension and traction control systems.

Honda had supplied McLaren with engines from 1988–92, the first four years where the team had dominated the drivers' and Constructors' Championships. However, Honda departed F1 after 1992 due to the worldwide recession and team principal Ron Dennis was unable to get a supply of Renault engines as a replacement.

McLaren had to make do with the Ford HBD7 3.5 V8 engine, which had inferior power compared to the Renault engine found in their chief rival Williams, and even the higher spec Ford engine fitted in the Benetton that season. Because Benetton had a pre-existing contract as the Ford factory team, McLaren had to settle for a customer engine which lacked some of the technological advancements of Benetton's factory engine. McLaren did secure a supply of the higher spec Ford engines after the British Grand Prix. The customer spec Ford engine was 35 hp less than the works Ford engine in the Benetton, and 80 hp less than the Williams.[1] During the season, McLaren improved their car and engine performance with technology from TAG Electronics.[2] 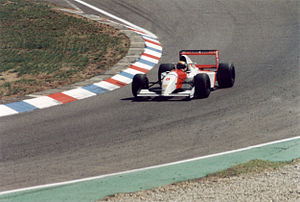 Ayrton Senna driving the MP4/8 at the 1993 German Grand Prix.

Initially, Ayrton Senna was impressed by the car's handling and nimbleness, but he felt the customer-spec. Ford-Cosworth V8 to be underpowered compared to the Renault V10-powered Williams and he demanded a race-by-race contract at $1 million per Grand Prix, though others suggested that this was a marketing ploy between Senna and Ron Dennis to keep sponsors on edge and interested. Although the Ford-Cosworth V8 was lighter than the Renault V10, the power-to weight ratio of the Renault was greater than the Ford.

However, the MP4/8 was competitive enough to achieve some remarkable successes. Even though rival Alain Prost was in the superior Williams FW15C, Senna's skill enabled him to lead the championship until after Canada, by winning 3 of the first 6 races, which consisted of his 2nd victory in Brazil, his 6th Monaco Grand Prix victory and one of his greatest drives in the 1993 European Grand Prix at Donington Park in England. The MP4/8 was known for having a considerably shorter wheelbase (length) than the FW15C and was a noticeably smaller car in length than Prost's Williams. Later in the season, the Frenchman asserted the dominance of his Williams to take the lead for good, while Senna fell off pace during the second half of the schedule and dropped to third place. While Prost clinched the championship with two races to spare, Senna went on to win the last two races in Japan and Australia. The Brazilian had five wins in total, and finished second in the Drivers' Championship to Alain Prost, whilst McLaren finished runners up to Williams in the Constructors' Championship.

File:Mclaren MP4 8.jpg
Ayrton Senna's MP4/8 on display at Donington, the site of his famous wet-weather victory in 1993.

The car scored 84 points during the season, 73 of which came from Senna, for an average of 2.63 per start. The other drivers of the MP4/8 were Michael Andretti, a recent American CART champion, and Mika Häkkinen. While Senna took the championship battle to the last few rounds, Andretti had only a few points scoring finishes, including one podium. Some factors were outside his control; for instance he never tested a Formula 1 car in the wet and a string of collisions meant that he only completed three laps in his first three races. Andretti also never came to grips with highly technical aspects such as active suspension and traction control, two "gizmos" not found in the simpler CART. Lastly, Andretti continued to reside in the United States, commuting to F1 races and test sessions. By mutual agreement, Andretti was released from his contract after he scored his only podium for the team.

At the next round, in Estoril, the experienced test driver Mika Häkkinen went on to outqualify his triple world champion team-mate and was in a competitive position in the race, duelling with Jean Alesi's Ferrari. Häkkinen however, ran too close to the Ferrari at the 5th gear final corner, losing downforce and understeering onto the grass, and into the wall. For the remainder of the season he went on to score one podium, and another retirement from a competitive position.

During 1993 the McLaren team built a modified version of the MP4/8, dubbed the MP4/8B (and often nicknamed McLambo[citation needed]), to be used as a test car for the Lamborghini V12 engine. After a handshake deal between Ron Dennis and Bob Lutz of Chrysler (who at the time owned Lamborghini) at a motor show in Munich, the modified car carried the 710 bhp (529 kW; 720 PS) V12 engine (dubbed the Lamborghini 3512) that was also supplied at the time to the Larrousse team and had previously been used by both Lotus and Ligier with little success. Lutz explained that after four years in Formula One, Chrysler wanted to test whether the V12 had the potential to be a winner in F1. After running with lower ranked teams since its introduction to F1 in 1989 (which by Lamborghini's own admission was because they did not feel the new engine could do justice to one of the leading teams), it was decided that a top team was needed to test that potential and a set of V12 engines were supplied to McLaren for testing.

Ayrton Senna and Mika Häkkinen tested the car at both Silverstone and Estoril, with the first test taking place at Silverstone on 20 September. The modified MP4/8B took three months to re-engineer and stretch in order to fit the longer and heavier engine (the V12 was badged as Chrysler for the McLaren tests). After first driving the car Senna suggested to the engine's designer, former long-time Ferrari engineer Mauro Forghieri, that it would be better with a less brutal top end and a much fatter mid-range. Forghieri, who had enormous respect for the triple World Champion and valued his opinion, made the requested changes. While the engine lost 25 bhp at the top end, it gained 60 bhp all round, giving the V12 approximately 750 bhp (559 kW; 760 PS), almost 70 bhp more than the customer Ford engines and almost on par with the most powerful engines of 1993, Renault's V10 and the V12 Ferrari. The result was reportedly making the MP4/8B more drivable and much faster than before, even faster than the race version.[3] According to reports at the time, the combination of the MP4/8B and the Lamborghini V12 actually proved more stable and easier on tyres than the Ford powered MP4/8 race cars.

Both Senna and Häkkinen were reportedly very impressed with the car/engine combination, despite the 3512's poor reliability record since its Formula One debut and its poor reliability during the tests (the engine's best result to that point was a lucky 3rd place at the infamous 1990 Japanese Grand Prix, which would ultimately prove to be its best ever result). Häkkinen claimed that during the Silverstone test, one of the engines blew up as he was racing down the Hanger Straight. He claimed that right up to the point of detonation the engine was pushing out more and more power and actually felt much faster than the Ford.[4] Senna fuelled rumours that the car would be raced during the 1993 season when he reportedly said during testing "It would be very interesting to race the Lamborghini in Japan". His belief was that regardless of reliability, the McLaren-Lamborghini would at least be as fast as both the Williams-Renaults and Benetton-Fords who he was struggling to keep up with in races using the customer spec Ford V8 (ironically Senna would win in Japan using the Ford V8 and backed that up with his last ever win in Australia). Senna even allegedly rang Ron Dennis from the pits during the Estoril test (according to reports Dennis took the call in his private limo as he was in England at the time) and told him that he felt that they should seriously think about using the V12 instead of the V8.

History shows that this never happened as plans were by then already in motion for McLaren to use the Peugeot A6 V10 in 1994. In late 1993, Senna had already signed for Williams for the 1994 season, 20 years later, Dennis revealed that Senna would have remained with McLaren had McLaren signed Peugeot earlier but felt obligated to stay with Williams.[5] At the time, It is speculated that Senna (correctly) believed that despite the engine's success in endurance sports car racing, having won Le Mans in 1992 and 1993, it would not stand up to the rigors of Formula One where the engines were under high strain and were constantly being pushed to their limits. The MP4/9 Peugeot which followed was closely based on its predecessor, but was not as successful as the engines proved woefully unreliable and promised development from Peugeot never eventuated. After a dismal 1994 season, McLaren severed ties with Peugeot and began its successful partnership with Mercedes in 1995.