The McLaren MP4/9 was a Formula One car designed by Neil Oatley for the 1994 Formula One season and was run by the Marlboro McLaren Team. The number 7 car was driven by the team's 1993 driver Mika Häkkinen and the number 8 car was driven by Martin Brundle who had signed from Ligier. The title sponsor was Marlboro with additional branding by Hugo Boss, Shell and Goodyear.

Due to changes in Formula One regulations intended to return emphasis on driver skills, many technologies designed to aid the driver, such as active suspension, power-assisted brakes, ABS and traction control, which had featured on the previous season's car, were no longer permitted. Visually the car was otherwise very similar to the preceding MP4/8.

The MP4/9 was initially powered by the Peugeot A4 V10 engine which produced around 700 bhp (522 kW; 710 PS). The engine proved unreliable and both Häkkinen and Brundle retired from the first two races with each suffering one engine failure. The 760 bhp (567 kW; 771 PS) A6 V10 was then introduced, and while it gave Häkkinen third place at San Marino and Brundle second at Monaco, the engine was generally regarded as a "hand grenade" due to frequent failures in testing, qualifying and races. It was not until Italy that Peugeot started to get reliability from the engine.

At the behest of Peugeot the team's test driver was Frenchman Philippe Alliot. The French company preferred Alliot, who had been a lead driver with their World Sportscar team, over Brundle for the role of second driver—something which infuriated McLaren team boss Ron Dennis, as he did not think much of the Alliot's driving and clearly preferred Brundle; Alliot had been in F1 since 1984 and had a reputation for being fast but accident-prone. Brundle had also been racing Grands Prix since 1984 and, while fast, was also a much more steady driver. Alliot, whose only role in the team was as a test and reserve driver, only raced for the team as a one-off replacement for Häkkinen in Hungary, as the Finn was serving a one-race ban after being held responsible for a large accident on the first lap at the preceding German Grand Prix.

By the standards of McLaren's recent cars the MP4/9 was a disappointment, failing to win any races (the first time McLaren had failed to win a race since 1980) and hampered by poor reliability and performance from its Peugeot engine (taken from the Peugeot 905 sportscar that won Le Mans twice). Early in the season, Ron Dennis had believed rivalry between the French manufacturer and compatriots Renault would lead to rapid development and performance. As the season progressed the engines suffered regular and frequently spectacular failures (including at the British Grand Prix where Brundle's engine erupted into flames within a second of the green flag),[2] and causing the team to doubt Peugeot's commitment to the project. By late 1994 the team announced it had parted company with the engine supplier in favour of a long term deal with Mercedes. 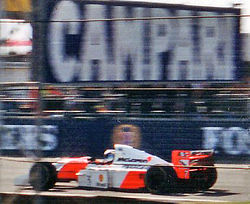 Mika Häkkinen driving the MP4/9 at the 1994 British Grand Prix.