The McLaren P1 is a limited production plug-in hybrid Sports car by British car manufacturer McLaren Automotive. The so called Hypercar and concept car was capable of reaching speeds of 218 mph (351 km/h) with the limiter on, and up to 249 mph (401 km/h) without it. Debuted at the 2012 Paris Motor Show all 375 models were soon snatched up.[4] Deliveries to retail customers began in the UK in October 2013.[5] The entire P1 production of 375 units was sold out by November 2013.[6] The production run ended in December 2015.[7] The United States accounted for 34% of the limited production run, and Europe for 26%.[7]

It is considered to be the long-awaited successor to the McLaren F1, utilizing hybrid power and Formula 1 technology, but does not have the same three seat layout as its predecessor. Like the McLaren F1 road car of 1992, the McLaren P1 is a mid-engine, rear-wheel drive design that uses a carbon fibre monocoque and roof structure safety cage concept called MonoCage, which is a development of the MonoCell first used in the McLaren MP4-12C and then in subsequent evolutionary models. Its main hyper-fast competitors are the LaFerrari and the Porsche 918. They are all similar in specifications and performance, and in a race round Silverstone circuit they were all within a second of each other, the P1 finishing first at a time of 58.24 sec and the LaFerrari finishing slightly slower at 58:58 and the Porsche in between them with 58:46.[8]

A track-only version of the P1, the McLaren P1 GTR, was unveiled at the 2015 Geneva Motor Show. Production of the GTR was limited to approximately 35 units and only original McLaren P1 owners will be invited to buy one.[9]

Power for the electric motor is stored in a 324-cell lithium-ion high density battery pack located behind the cabin, developed by Johnson Matthey Battery Systems. The battery can be charged by the engine or through a plug-in equipment and can be fully charged in two hours. The car can be operated using either the petrol engine, the electric motor or with a combination of the two. The P1 has an all-electric range of at least 10 km (6.2 mi) on the combined European drive cycle.[12] Under the EPA cycle, the range in EV mode is 19 mi (31 km). During EV mode the P1 has a gasoline consumption of 4.8 gallons per 100 mi, and as a result, EPA's all-electric range is rated as zero. The total range is 330 mi (530 km).[1] The P1 combined fuel economy in EV mode was rated by the EPA at 18 miles per gallon gasoline equivalent (MPG-equivalent) (13 L gasoline equivalent/100 km; 22 mpg-imp gasoline equivalent), with an energy consumption of 25 kW-hrs/100 mi and gasoline consumption of 4.8 gal-US/100 mi. The combined fuel economy when running only with gasoline is 17 mpg-US (14 L/100 km; 20 mpg-imp), 16 mpg-US (15 L/100 km; 19 mpg-imp) for city driving, and 20 mpg-US (12 L/100 km; 24 mpg-imp) in highway.[1][13]

The P1 comes with Formula 1 derived features such as the Instant Power Assist System (IPAS), which will give an instant boost in acceleration via the electric motor, a Drag Reduction System (DRS) which operates the car's rear wing, thereby increasing straight line speed, and a KERS. Both of these features (IPAS, DRS) are operated via two buttons on the steering wheel. 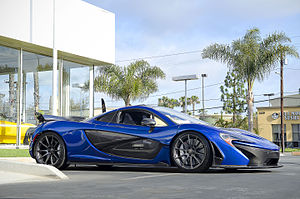 In August 2013 McLaren announced that the production allocation destined to the Americas, Asia-Pacific and the Middle East was sold out.[19] The cars destined for Europe were sold out by mid November 2013.[6] The United States accounted for 34% of the limited production run, and Europe for 26%.[7] 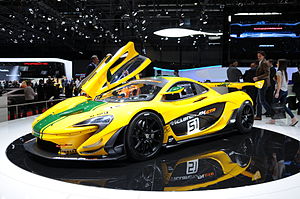 The production version of the McLaren P1 GTR was unveiled at the 2015 Geneva Motor Show.

Celebrating 20 years since their victory in the 1995 24 Hours of Le Mans, McLaren announced that they would resurrect the GTR name by launching a track-only version of the P1, the McLaren P1 GTR.

The GTR will be made available to the 375 McLaren P1 owners only, and will be a very limited edition of 35 units.[9] The concept car made its debut at the 2014 Pebble Beach Concours d'Elegance in August 2014. The P1 GTR production model was officially unveiled at the 2015 Geneva Motor Show. The GTR variant is priced at GB£1.9 million.[9] This price includes a worldwide owners trackday series; later GTRs were offered for less money, approximately $1.7 million, for those P1 owners who had no interest in the track series but still wanted to purchase the GTR variant.

McLaren states that this will be the most powerful McLaren to date, with an intended power output of 987 bhp (1,000 PS, 735 kW). The car will also feature slick tyres, and is claimed to have greater levels of performance, grip, aerodynamics and downforce in comparison to the road car. Featuring a new fixed ride height on race-prepared suspension, a fixed rear wing capable of using DRS, and a new exclusively designed exhaust, McLaren aims to deliver the ultimate track experience.[27][28]

This limited edition will go into production in 2015, after all 375 standard McLaren P1's have been built, as homage to its race-winning ancestor, the iconic F1 GTR, and will be built, maintained and run by McLaren Special Operations.[29]

The McLaren P1 GTR hybrid engine aims at producing 1,000PS (987 bhp); 84 bhp over the current model, although McLaren did not disclose whether the power increase is from electrical boost or tuning the twin turbo 3.8-litre V8. Performance figures are unconfirmed.[30] P1 GTR weight was reduced by 50 kg and deliver power-to-weight ratio of 687 bhp per tonne.[31]

McLaren announced a sub-seven minute lap of the Nürburgring Nordschleife, which equates to an average speed in excess of 179 km/h (111 mph), but did not publish the exact time.[32][33] The P1 currently holds the production car lap record at Circuit of the Americas,[34] Algarve International Circuit,[35] Anglesey Coastal Circuit[36] and Silverstone National Circuit.[37][38]