Stevenson was born in Normal, Illinois. He was the great-grandson of William Stevenson (brother of US Vice President Adlai E. Stevenson) making him a second cousin once removed of two-time presidential candidate Adlai E. Stevenson II. He was also the brother of actress Ann Whitney.[1] His father, Edgar, was a cardiologist.

Stevenson attended Lake Forest Academy and later joined the United States Navy. After his service, he attended Northwestern University, where he graduated with a bachelor's degree in theater arts and was a proud and well-liked Phi Gamma Delta (Fiji) fraternity brother. Afterwards he worked at a radio station, played a clown on a live TV show in Dallas, became an assistant athletic director at Northwestern and sold medical supplies and insurance. He also worked as a press secretary for his cousin in the presidential elections of 1952 and 1956. He formed the "Young Democrats for Stevenson".[citation needed]

In 1961, Stevenson's cousin invited him to social functions where he met a few business luminaries. He followed his cousin's advice to look for a show business career. He auditioned and won a scholarship to the American Musical and Dramatic Academy. He made his professional career debut in The Music Man in 1962 and appeared regularly in Warsaw, Indiana, in summer stock productions. After this he appeared in New York on stage and television[2] commercials. He also performed on Broadway. However, he began to establish himself as a comedy writer, writing for the seminal That Was The Week That Was, in which Alan Alda appeared, and The Smothers Brothers Comedy Hour. He performed occasionally on both shows. He also was a regular on the 1970 The Tim Conway Comedy Hour variety show on CBS. During this period, he also appeared in TV commercials for products such as Winston cigarettes, in which he was shown sprinting around a parking lot of Winston delivery trucks and painting over the product slogan, replacing the "like" in "like a cigarette should" with the grammatically correct "as".[citation needed] 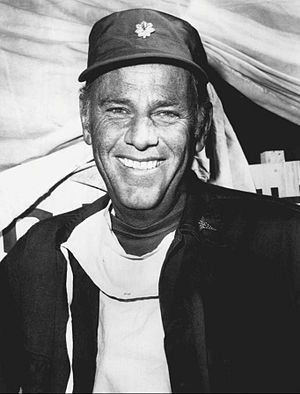 After guest-starring on That Girl with Marlo Thomas, he was cast in The Doris Day Show in 1969, playing magazine editor boss Michael Nicholson until 1971. Originally, he auditioned for the role of Hawkeye Pierce in M*A*S*H, but was convinced to play Lt. Col. Henry Blake instead. This role shot him to stardom. He eventually wrote the episode "The Trial of Henry Blake", and provided the story for another, "The Army-Navy Game", which earned Stevenson an Emmy nomination.

The series quickly became one of the most popular situation comedies running, and was eventually recognized as one of the top sitcoms in television history. Despite the show's success, Stevenson began chafing (as did Wayne Rogers) at playing second fiddle to the wisecracking Hawkeye (played by Alan Alda), and asked to be released from his contract during the show's third season. The original agreement with the producers of M*A*S*H was that if McLean's new sitcom were to flop, he would be welcomed back to M*A*S*H[citation needed]. Alan Alda was unhappy with McLean leaving[citation needed], so he had the show's writers reluctantly pen him an exit[citation needed] in the final episode of the 1974-75 season, in which Lt. Colonel Blake was discharged, only to board a plane that was shot down over the Sea of Japan, killing everyone on board (a development added after scripts were distributed so the show's actors would display genuine emotion as if they had been truly unaware of that part of the storyline). Stevenson later admitted that leaving M*A*S*H was a mistake, and he was also upset by the fact that his character's death prevented him from returning to the show[citation needed].

In an interview, M*A*S*H co-star Loretta Swit shed some light on the subject of why Stevenson left the series at the height of its success.[citation needed] She said Stevenson wanted to be number one and felt pushed down as one of an ensemble of eight. Swit said that before Stevenson left the series he told her, "I know I will not be in anything as good as this show, but I have to leave and be number one." Although he had played ensemble parts for several years, he has stated that the primary reasons for his departure were systemic problems with 20th Century Fox, especially disregard for simple comforts for crew and cast on location,[3] and opportunities that at the time seemed more appealing than staying with the show.[4]

Stevenson was later replaced in the series by Harry Morgan, a fan favorite of the show and a friend of Stevenson, who had guest-starred on one episode during Stevenson's final year, and who played the role of Colonel Sherman Potter for the remainder of the show's eight seasons and starred in its short-lived spin-off AfterMASH.[5]

Stevenson appeared as a guest panelist for several weeks on Match Game in 1973, and again in 1978 on the daytime and nighttime weekly syndicated version. In 1981, Stevenson became a regular panelist on the daily syndicated version of Match Game, staying with the show until its cancellation a year later. Stevenson would make occasional appearances on the subsequent Match Game-Hollywood Squares Hour in 1983 and 1984.

After his departure from M*A*S*H, Stevenson's acting career began to decline. He starred in a series of sitcoms, none of which lasted more than approximately one season. They included The McLean Stevenson Show (1976–77), In the Beginning (1978), Hello, Larry (1979–80) and Condo (1983). All four sitcoms were dismissed by audiences and lambasted by critics, and all aired while M*A*S*H was still in production. Stevenson guest-starred as Stan Zbornak's brother Ted on the hit sitcom The Golden Girls in 1987, in addition to guest-starring in shows such as Square One TV, The Love Boat, Diff'rent Strokes (as part of a cross-over with his series Hello, Larry), and Hollywood Squares. He filled in for Johnny Carson as guest host of The Tonight Show 58 times.[6] During the 1988–89 television season, Stevenson returned to a supporting TV role in an ensemble, playing Max Kellerman in the short-lived CBS series adaptation of Dirty Dancing.

Stevenson's dramatic career decline resulted in him becoming a target for industry jokes. One television critic wrote that he had "worn out his television welcome," while another created "The Annual McLean Stevenson Memorial, 'I'm Gonna Quit This Show and Become a Big Star' Award." Stevenson commented in 1990 that some of the criticism was justified, admitting that leaving M*A*S*H was a mistake: "I made the mistake of believing that people were enamored of McLean Stevenson when the person they were enamored of was Henry Blake." Stevenson said that his problem was finding something of the caliber of M*A*S*H, saying "I've never been able to work with a group that's as talented or scripts that are as good. I did some terrible shows. But nobody made me do it. I did everything by choice."[7]

Stevenson's screen credits include the Disney movie The Cat from Outer Space as a friend of Dr. Frank Wilson (played by Ken Berry) along with his M*A*S*H replacement Harry Morgan. He also was a co-host of the syndicated daytime talk show America, which lasted 16 weeks between September 16, 1985 and January 3, 1986.

Stevenson was recovering from bladder cancer surgery in a Los Angeles hospital on February 15, 1996, when he suffered a fatal heart attack and died.[8][9]

Stevenson is interred in Forest Lawn - Hollywood Hills Cemetery in Los Angeles. He was survived by his wife Ginny, daughter Lindsey, daughter Jennifer, and son Jeff MacGregor (both from previous marriages).[10]