The McMillan Tac-50 sniper rifle is produced in Phoenix, Arizona in the United States by McMillan Firearms Manufacturing. This long-range anti-material/anti-personnel weapon is based on previous designs from the same company, which first appeared during the late 1980s. McMillan makes several versions of .50 caliber rifles, based on the same proprietary action, for military, law enforcement and civilian use.

The Tac-50 is a military and law enforcement weapon, which, designated as the C15, is the standard Long Range Sniper Weapon (LRSW) of the Canadian Forces since 2000. Rifles of the Tac-50 family are capable of outstanding accuracy and guaranteed to provide 0.5 MOA groups with match grade ammunition.[2]

The McMillan Tac-50 is a manually operated, rotary bolt-action rifle. The large bolt has dual front locking lugs, and its body has spiral flutes to reduce weight. The heavy match-grade barrel, made by Lilja barrels, is also fluted to dissipate heat quickly and reduce overall weight and fitted with an effective muzzle brake to reduce recoil. The rifle is fed from detachable box magazines, holding 5 rounds each. The stock is made from fiberglass by McMillan Stocks, and is designed to be used from a bipod only. The buttstock is adjustable for length of pull with rubber spacers, and can be removed for compact storage. The rifle has no open sights and can be used with a variety of telescopic or night sights.

In 2012 the Tac-50 A1 variant was introduced. The TAC-50 A1 features a new take-down fiberglass stock with a forend that is 5 in (127 mm) longer compared to the Tac-50 stock. This moves the balance point for the bipod forward. The stock includes an integral cheekpiece and a monopod on the buttstock with an option for vertical adjustment. The stock incorporates a smaller pistol grip to fit a wider range of hand shapes, with and without gloves. The magazine release lever was repositioned ahead of the trigger bow to make the system easier to operate with gloved hands. For the A1 variant a new lighter bipod with legs that adjust vertically, as well as forward and rearward to fine-tune the rifle for elevation was also developed.[3]

The Tac-50 A1-R2 variant was introduced in 2012 alongside the Tac-50 A1 variant. The A1-R2 variant is basically a Tac-50 A1 rifle system with a hydraulic recoil mitigation system (a proprietary hydraulic piston in the buttstock) added to reduce the considerable amount of free recoil the .50 BMG chambering generates and hence increase user comfort.[4] 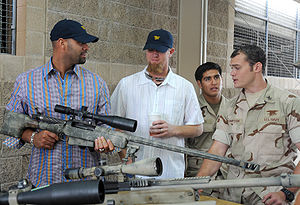