From Infogalactic: the planetary knowledge core
Jump to: navigation, search
This article is about the alcoholic beverage. For other uses, see Mead (disambiguation). 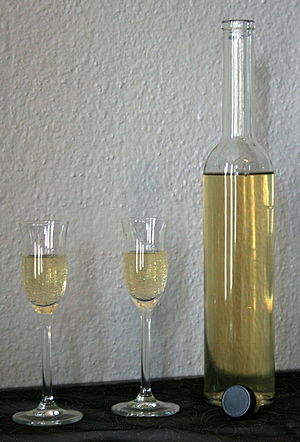 Mead (/ˈmiːd/; archaic and dialectal "medd"; from Old English "meodu",[1]) is an alcoholic beverage created by fermenting honey with water, sometimes with various fruit, spices, grains, or hops.[2][3][4] (Hops act as a preservative and produce a bitter, beer-like flavor.) The alcoholic content of mead may range from about 8% ABV[5] to more than 20%. The defining characteristic of mead is that the majority of the beverage's fermentable sugar is derived from honey.[6] It may be still, carbonated, or naturally sparkling; and it may be dry, semi-sweet, or sweet.[7]

Mead is known from many sources of ancient history throughout Europe, Africa and Asia. "It can be regarded as the ancestor of all fermented drinks," Maguelonne Toussaint-Samat has speculated, "antedating the cultivation of the soil."[8] Hornsey considers archaeological evidence of it ambiguous;[9] however, McGovern and other archaeological chemists consider the presence of beeswax markers and gluconic acid, in the presence of other substances known to ferment, to be reasonably conclusive evidence of the use of honey in ancient fermented beverages.[10][11]

Claude Lévi-Strauss makes a case for the invention of mead as a marker of the passage "from nature to culture."[12] Mead has played an important role in the beliefs and mythology of some peoples. One such example is the Mead of Poetry, a mead of Norse mythology crafted from the blood of the wise being Kvasir which turns the drinker into a poet or scholar.

The terms "mead" and "honey-wine" are often used synonymously.[13][14] Honey-wine is differentiated from mead in some cultures. Hungarians hold that while mead is made of honey, water and beer-yeast (barm), honey-wine is watered honey fermented by recrement of grapes (or other fruits).[15]

In Asia, pottery vessels containing chemical signatures of a mixture of honey, rice and other fruits along with organic compounds of fermentation dating from 6500-7000 BC were found in Northern China.[16] In Europe, it is first attested in residual samples found in the characteristic ceramics of the Bell Beaker Culture (c. 2800 – 1800 BC).[17]

The earliest surviving description of mead is in the hymns of the Rigveda,[18] one of the sacred books of the historical Vedic religion and (later) Hinduism dated around 1700–1100 BC. During the Golden Age of Ancient Greece, mead was said to be the preferred drink.[19] Aristotle (384–322 BC) discussed mead in his Meteorologica and elsewhere, while Pliny the Elder (AD 23–79) called mead militites in his Naturalis Historia and differentiated wine sweetened with honey or "honey-wine" from mead.[20] The Spanish-Roman naturalist Columella gave a recipe for mead in De re rustica, about AD 60.

Take rainwater kept for several years, and mix a sextarius[21] of this water with a [Roman] pound[22] of honey. For a weaker mead, mix a sextarius of water with nine ounces[23] of honey. The whole is exposed to the sun for 40 days, and then left on a shelf near the fire. If you have no rain water, then boil spring water.[24]

There is a poem attributed to the Brythonic-speaking bard Taliesin, who lived around AD 550, called the Kanu y med or "Song of Mead."[25] The legendary drinking, feasting and boasting of warriors in the mead hall is echoed in the mead hall Din Eidyn (modern day Edinburgh) as depicted in the poem Y Gododdin, attributed to the poet Aneirin who would have been a contemporary of Taliesin. In the Old English epic poem Beowulf, the Danish warriors drank mead. In both Insular Celtic and Germanic cultures mead was the primary heroic drink in poetry.

Later, taxation and regulations governing the ingredients of alcoholic beverages led to commercial mead becoming a more obscure beverage until recently.[26] Some monasteries kept up the old traditions of mead-making as a by-product of beekeeping, especially in areas where grapes could not be grown, a well-known example being at Lindisfarne, where mead continues to be made to this day, albeit not in the monastery itself.

Mead was also popular in Eastern Europe and in the Baltic states. In the Polish language mead is called miód pitny ([ˈmiut ˈpitnɨ]), meaning "drinkable honey". In Russian it is called Medovukha Медовуха, which means the same thing as in Polish. Since the 19th century, in Russia, mead has remained popular in the drinks medovukha and sbiten long after its decline in the West. Sbiten is often mentioned in the works of 19th-century Russian writers, including Gogol, Dostoevsky and Tolstoy. In Montenegro, medovina has been considered a healthy elixir and mentioned often in folk literature.

In Finland, a sweet mead called sima (cognate with the root of zymurgy) is still an essential seasonal fermented product connected with the Finnish Vappu (May Day) festival. It is usually spiced by adding both the pulp and rind of a lemon. During secondary fermentation, raisins are added to control the amount of sugars and to act as an indicator of readiness for consumption; they will rise to the top of the bottle when the drink is ready. However, the sugar used in modern practice is typically brown sugar, not honey.[28]

Ethiopian mead is called tej (ጠጅ, [ˈtʼədʒ]) and is usually home-made. It is flavored with the powdered leaves and bark of gesho, a hop-like bittering agent which is a species of buckthorn. A sweeter, less-alcoholic version called berz, aged for a shorter time, is also made. The traditional vessel for drinking tej is a rounded vase-shaped container called a berele.

Mead known as iQhilika is traditionally prepared by the Xhosa of South Africa.

In the USA, mead is enjoying a resurgence, starting with small home meaderies and now with a number of small commercial meaderies.[29] As mead becomes more widely available, it is seeing increased attention and exposure from the news media.[30][31]

The yeast used in mead making is often identical to that used in wine making. Many home mead makers choose to use wine yeasts (particularly those used in the preparation of white wines) to make their meads.[32] The problem with this is that the honey-based mead does not have a sufficient quantity of nutrients to produce a wholesome mead.[33] To circumvent the nutrient issue, both commercial and homebrew mead makers add specific quantities of diammonium phosphate, vitamin B1, vitamin B12, vitamin B3, biotin, and other key minerals.[34] These are often added based on a staggered addition schedule in order to achieve a high-quality readily-drinkable mead.[35] In some cases, the mead prepared with a staggered nutrient addition can be consumed the moment it is bottled as opposed to waiting over one year for it to age.[36]

Meads will often ferment well at the same temperatures in which wine is fermented.

After primary fermentation slows down significantly — usually when specific gravity reaches 1.010 — the mead is then racked into a second container. This is known as secondary fermentation. Some larger commercial fermenters are designed to allow both primary and secondary fermentation to happen inside of the same vessel. Racking is done for two reasons: it lets the mead sit away from the remains of the yeast cells (lees) that have died during the fermentation process. Second, this lets the mead have time to clear. If the mead maker wishes to backsweeten the product or prevent it from oxidizing, potassium metabisulfite and potassium sorbate are added. After the mead clears, it is bottled and distributed. 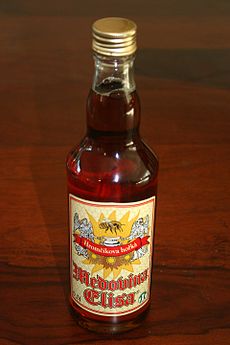 Mead can have a wide range of flavors depending on the source of the honey, additives (also known as "adjuncts" or "gruit") including fruit and spices, the yeast employed during fermentation and the aging procedure.[38] Some producers have marketed white wine sweetened and flavored with honey after fermentation as mead, sometimes spelling it "meade."[38] This is closer in style to a Hypocras. Blended varieties of mead may be known by the style represented; for instance, a mead made with cinnamon and apples may be referred to as either a cinnamon cyser or an apple metheglin.

A mead that also contains spices (such as cloves, cinnamon or nutmeg), or herbs (such as meadowsweet, hops, or even lavender or chamomile), is called a metheglin /mᵻˈθɛɡlɪn/.[39][40]

A mead that contains fruit (such as raspberry, blackberry or strawberry) is called a melomel,[41] which was also used as a means of food preservation, keeping summer produce for the winter. A mead that is fermented with grape juice is called a pyment.[41]

Mulled mead is a popular drink at Christmas time, where mead is flavored with spices (and sometimes various fruits) and warmed, traditionally by having a hot poker plunged into it.[citation needed]

Some meads retain some measure of the sweetness of the original honey, and some may even be considered as dessert wines. Drier meads are also available, and some producers offer sparkling meads.

There are faux-meads, which are actually wines with honey added after fermentation as a sweetener and flavoring.[42]

Historically, meads were fermented with wild yeasts and bacteria (as noted in the recipe quoted above) residing on the skins of the fruit or within the honey itself. Wild yeasts can produce inconsistent results. Yeast companies have isolated strains of yeast which produce consistently appealing products. Brewers, winemakers and mead makers commonly use them for fermentation, including yeast strains identified specifically for mead fermentation. These are strains that have been selected because of their characteristic of preserving delicate honey flavors and aromas.

Mead can also be distilled to a brandy or liqueur strength. A version called "honey jack" can be made by partly freezing a quantity of mead and straining the ice out of the liquid (a process known as freeze distillation), in the same way that applejack is made from cider. 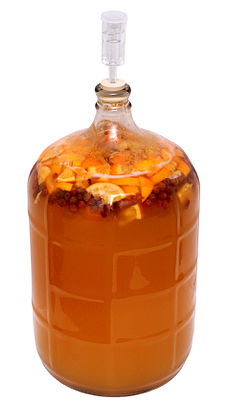 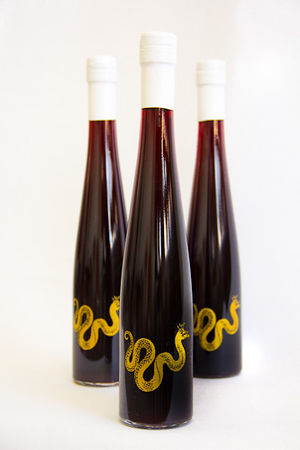 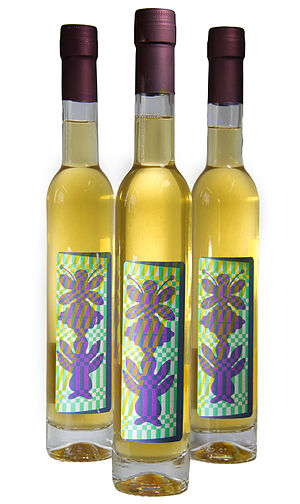 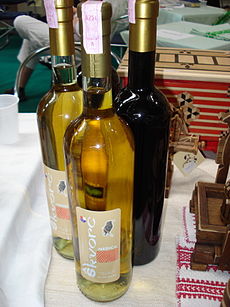 Bottles of "medica" (r.meditsa) - a mead made in Međimurje County, northern Croatia 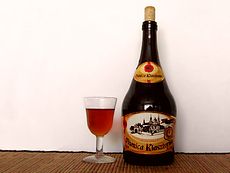 Trójniak — a Polish mead, made using two units of water for each unit of honey

Mead is featured in many Germanic myths and folktales such as Beowulf, as well as in other popular works that draw on these myths. Notable examples include books by Tolkien, George R. R. Martin, T. H. White, and Neil Gaiman. It is often featured in books using a historical Germanic setting and in writings about the Viking age. Mead is mentioned many times in Neil Gaiman's 2001 novel, American Gods; it is referred to as the drink of the gods. In the Inheritance Cycle series by Christopher Paolini, the protagonist, Eragon, often drinks mead at feasts. It is also referenced in The Kingkiller Chronicle novel series by Patrick Rothfuss. The protagonist Kvothe is known to drink metheglin. The non-existent "Greysdale Mead" is also drunk, although it is merely water.