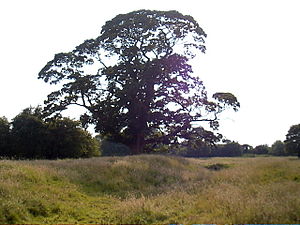 Site of Meaux Abbey, west of Meaux.
Only earthworks are visible.

Meaux Abbey (archaic, also referred to as Melsa) was a Cistercian Abbey founded in 1151 by William le Gros, 1st Earl of Albemarle (Count of Aumale), Earl of York and 4th lord of Holderness, near Beverley in the East Riding of Yorkshire, England.

A chronicle of its history was written by Thomas Burton, one of the abbots. The abbey owned the land of Wyke, which was purchased from it by King Edward I of England in 1293 and the town Kingston upon Hull was established.

The abbey was closed in 1539 by King Henry VIII. It was demolished and the stones were used to build defences for the town of Kingston upon Hull.